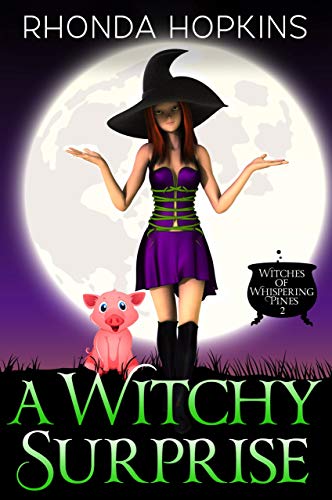 A magical heritage. A threat in the forest. An explosion of powers.

Charley Cooper is tired of being the lone non-magical person in a family of witches. At the ripe-old age of sixteen, she believes the witchy gene has skipped her. But when something dark in the forest threatens her best friend and her little sister, Charley's powers appear out of nowhere.

Now Charley's best friend is angry about the secrecy. Her crush is dating someone else. And, her out of control powers threaten to expose her family's secret.

When a dangerous enemy tries to silence them forever, Charley knows she must fight back. But can she learn to control her magic before they're all taking a nap in the local graveyard?

If you enjoy small-town mysteries with witches and quirky characters, you're sure to enjoy A Witchy Surprise. Get it today!

Cackling, laughter, and high-pitched squealing came from our backyard as I stepped outside just in time to snatch Babette, our miniature pig, out of the air.

“What the heck is going on?” I cuddled Babette to me, her squeals slowly ratcheting down as she pushed her warm velvety snout into my neck. I hugged her closer and she quieted.

Even at ten o’clock in the morning, the scorching Texas heat had me sweltering in seconds. Backing up, I opened the screen door and sat Babette gently inside before turning to face the dastardly duo in the yard. My cousin Danu bent at the waist with her hands on her knees, laughing so hard she had tears streaming down her face. My great-grandmother, who was definitely old enough to know better, cackled the laugh of the wicked witch she sometimes was.

“What in heaven’s name do you two think you’re doing? You’ve probably traumatized Babette for life.” Folding my arms across my chest I stood looking at them, my bare foot tapping against the wooden beams of the wrap-around porch.

“Oh, don’t be a spoilsport, Charley.” Grandma Ruby huffed and rolled her eyes. She sometimes acted like a teenager rather than someone in her seventies.

Even though you don't see pigs flying by very often, or ever, - not even in Whispering Pines - I'm still surprised it took so long for me to notice Grandma Ruby’s attire. When I did my eyes nearly popped right out of my head. She wore her signature ruby red, of course. Only today, the color spanned a pair of shorts. Short shorts. I mean, really reeaallly short. A black halter-top adorned with red ladybugs and black combat boots finished off the outfit. Blue veins ran down the length of her pasty white legs.

In my shock, I couldn’t speak. I scanned the backyard and sighed in relief when the high wooden fence and trees surrounding the five-acre property came into view. Then I remembered Mom had put a concealment spell on the backyard to prevent neighbors from catching sight of my cousin and great-grandmother experimenting with Danu’s powers. They had both gotten in trouble for disrespecting magic and using it inappropriately. For some reason my mom and Aunt Nadine thought making them work together for the summer would straighten them both out. If you ask me, it had been a colossal failure.

I stepped down one step and sat on the porch, placing my head in my hands. I breathed in and out several times.

When I felt calmer, I sat up straight. “Grandma Ruby, what are you wearing? You haven’t left the house like that have you?” I was trying not to be disrespectful in my panic, but with school starting back in a couple of weeks, I didn’t want the kids teasing me about my crazy grandma on the first day. I had my whole senior year ahead of me for that.

“What? It’s hot out here. Besides, I think I look good.” She twirled around and  Danu reached out to steady her as she tilted to one side.

Shaking my head, I remembered Babette. Focus, Charley. “Why was Babette flying through the air?”

“Well, Miss Nosy. I told Danu she had to get over her fear of flying and get on the broom and she said, ‘When pigs fly.’ So…” Grandma Ruby waved her arms in front of her as if it was a perfectly reasonable explanation.

Danu’s laugh burst into the silence that followed. “I’m still not getting on that broom, you old witch.”

“Better an old witch than a scared witch.” Grandma Ruby bent over to pick up the broom lying on the ground and I slapped a hand over my eyes.

Seriously, the woman needed to put on some more clothes.

I peeked through my fingers and found her upright again. I lowered my arm and stood. “You know... Mom’s not going to be happy when she finds out what you did to her familiar.”I stepped back onto the porch and walked to the door, opening it.

“Well, don’t be a tattletale!” Grandma Ruby shouted at me.

Just before the door closed I looked over my shoulder and said, “I won’t have to say a word. Babette will tell her.” I glanced back through the screen and saw Grandma Ruby frown which made me smile. Things should be entertaining tonight.