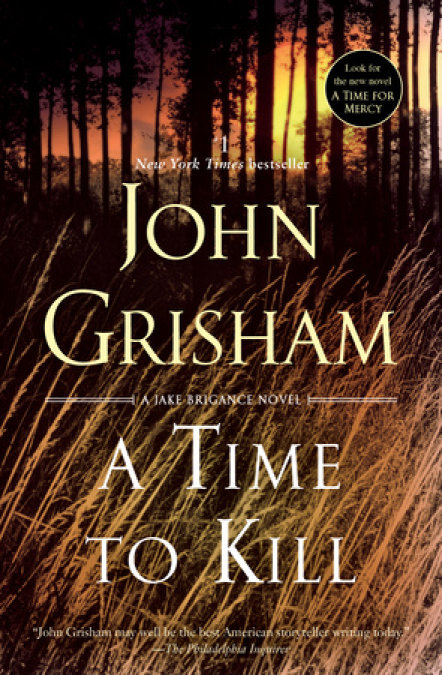 The life of a ten-year-old black girl is shattered by two drunken and remorseless white men. The mostly white town of Clanton in Ford County, Mississippi, reacts with shock and horror at the inhuman crime—until the girl’s father acquires an assault rifle and takes justice into his own hands.

For ten days, as burning crosses and the crack of sniper fire spread through the streets of Clanton, the nation sits spellbound as defense attorney Jake Brigance struggles to save his client’s life—and then his own. 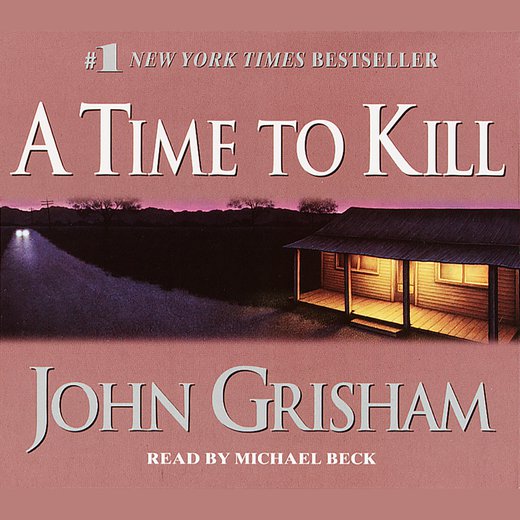 Few people attacked the morning like Jake Brigance. He walked briskly to the end of the driveway and got the morning papers for Carla. It was dark, clear, and cool with the promise of summer rapidly approaching.

He studied the darkness up and down Adams Street, then turned and admired his house. Two homes in Ford County were on the National Register of Historic Places, and Jake Brigance owned one of them. Although it was heavily mortgaged, he was proud of it nonetheless. It was a nineteenth-century Victorian built by a retired railroad man who died on the first Christmas Eve he spent in his new home. The facade was a huge, centered gable with hipped roof over a wide, inset front porch. Under the gable a small portico covered with bargeboard hung gently over the porch. The five supporting pillars were round and painted white and slate blue. Each column bore a handmade floral carving, each with a different flower—daffodils, irises, and sunflowers. The railing between the pillars was filled with lavish lacework. Upstairs, three bay windows opened onto a small balcony, and to the left of the balcony an octagonal tower with stained-glass windows protruded and rose above the gable until it peaked with an iron-crested finial. Below the tower and to the left of the porch, a wide, graceful veranda with ornamental railing extended from the house and served as a carport. The front panels were a collage of gingerbread, cedar shingles, scallops, fish scales, tiny intricate gables, and miniature spindles.

Carla had located a paint consultant in New Orleans, and the fairy chose six original colors—mostly shades of blue, teal, peach, and white. The paint job took two months and cost Jake five thousand dollars, and that did not include the countless hours he and Carla had spent dangling from ladders and scraping cornices. And although he was not wild about some of the colors, he had never dared suggest repainting.

As with every Victorian, the house was gloriously unique. It had a piquant, provocative, engaging quality derived from an ingenuous, joyous, almost childlike bearing. Carla had wanted it since before they married, and when the owner in Memphis finally died and the estate was closed, they bought it for a song because no one else would have it. It had been abandoned for twenty years. They borrowed heavily from two of the three banks in Clanton, and spent the next three years sweating and doting over their landmark. Now people drove by and took pictures of it.

The third local bank held the mortgage on Jake’s car, the only Saab in Ford County. And a red Saab at that. He wiped the dew from the windshield and unlocked the door. Max was still barking and had awakened the army of bluejays that lived in Mrs. Pickle’s maple tree. They sang to him and called farewell as he smiled and whistled in return. He backed into Adams Street. Two blocks east he turned south on Jefferson, which two blocks later ran dead end into Washington Street. Jake had often wondered why every small Southern town had an Adams, a Jefferson, and a Washington, but no Lincoln or Grant. Washington Street ran east and west on the north side of the Clanton square.

Because Clanton was the county seat it had a square, and the square quite naturally had a courthouse in the center of it. General Clanton had laid out the town with much thought, and the square was long and wide and the courthouse lawn was covered with massive oak trees, all lined neatly and spaced equally apart. The Ford County courthouse was well into its second century, built after the Yankees burned the first one. It defiantly faced south, as if telling those from the North to politely and eternally kiss its ass. It was old and stately, with white columns along the front and black shutters around the dozens of windows. The original red brick had long since been painted white, and every four years the Boy Scouts added a thick layer of shiny enamel for their traditional summer project. Several bond issues over the years had allowed additions and renovations. The lawn around it was clean and neatly trimmed. A crew from the jail manicured it twice a week.

Clanton had three coffee shops—two for the whites and one for the blacks, and all three were on the square. It was not illegal or uncommon for whites to eat at Claude’s, the black cafe on the west side. And it was safe for the blacks to eat at the Tea Shoppe, on the south side, or the Coffee Shop on Washington Street. They didn’t, however, since they were told they could back in the seventies. Jake ate barbecue every Friday at Claude’s, as did most of the white liberals in Clanton. But six mornings a week he was a regular at the Coffee Shop.

He parked the Saab in front of his office on Washington Street and walked three doors to the Coffee Shop. It had opened an hour earlier and by now was bustling with action. Waitresses scurried about serving coffee and breakfast and chatting incessantly with the farmers and mechanics and deputies who were the regulars. This was no white-collar cafe. The white collars gathered across the square at the Tea Shoppe later in the morning and discussed national politics, tennis, golf, and the stock market. At the Coffee Shop they talked about local politics, football, and bass fishing. Jake was one of the few white collars allowed to frequent the Coffee Shop. He was well liked and accepted by the blue collars, most of whom at one time or another had found their way to his office for a will, a deed, a divorce, a defense, or any one of a thousand other problems. They picked at him and told crooked lawyer jokes, but he had a thick skin. They asked him to explain Supreme Court rulings and other legal oddities during breakfast, and he gave a lot of free legal advice at the Coffee Shop. Jake had a way of cutting through the excess and discussing the meat of any issue. They appreciated that. They didn’t always agree with him, but they always got honest answers. They argued at times, but there were never hard feelings.

He made his entrance at six, and it took five minutes to greet everyone, shake hands, slap backs, and say smart things to the waitresses. By the time he sat at his table his favorite girl, Dell, had his coffee and regular breakfast of toast, jelly, and grits. She patted him on the hand and called him honey and sweetheart and generally made a fuss over him. She griped and snapped at the others, but had a different routine for Jake.

He ate with Tim Nunley, a mechanic down at the Chevrolet place, and two brothers, Bill and Bert West, who worked at the shoe factory north of town. He splashed three drops of Tabasco on his grits and stirred them artfully with a slice of butter. He covered the toast with a half inch of homemade strawberry jelly. Once his food was properly prepared, he tasted the coffee and started eating. They ate quietly and discussed how the crappie were biting.

In a booth by the window a few feet from Jake’s table, three deputies talked among themselves. The big one, Marshall Prather, turned to Jake and asked loudly, “Say, Jake, didn’t you defend Billy Ray Cobb a few years ago?”

The cafe was instantly silent as everyone looked at the lawyer. Startled not by the question but by its response, Jake swallowed his grits and searched for the name.

“Billy Ray Cobb,” he repeated aloud. “What kind of case was it?”

“Dope,” Prather said. “Caught him sellin’ dope about four years ago. Spent time in Parchman and got out last year.”

Jake remembered. “Naw, I didn’t represent him. I think he had a Memphis lawyer.”

Prather seemed satisfied and returned to his pancakes. Jake waited.

Finally he asked, “Why? What’s he done now?”

“We picked him up last night for rape.”