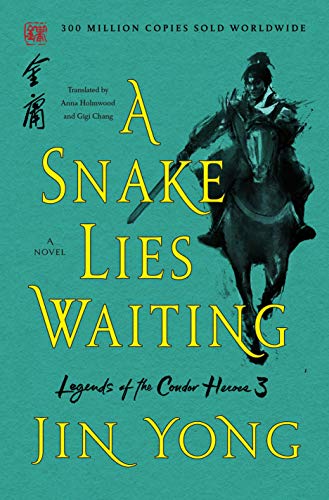 A Snake Lies Waiting is the next in Jin Yong's high stakes, tension-filled epic Legends of the Condor Heroes series, where kung fu is magic, kingdoms vie for power and the battle to become the ultimate kung fu master unfolds.

Guo Jing has confronted Apothecary Huang, his sweetheart Lotus Huang's father, on Peach Blossom Island, and bested the villainous Gallant Ouyang in the three trials to win the hand of his beloved.

But now, along with his two friends and shifus, Zhou Botong of the Quanzhen Sect, and Count Seven Hong, Chief of the Beggar Clan, he has walked into another trap. Tricked into boarding a unseaworthy barge by Apothecary Huang, the three friends will surely drown unless Lotus—who has overheard her father's plans—can find a way to save them.

Yet even if they are to survive the voyage, great dangers lie in wait on the mainland. Viper Ouyang, the gallant's uncle and one of the Five Greats of the martial world, is determined to have his revenge on Guo Jing for getting the better of his nephew, and bent on becoming the most powerful master of the wulin. Meanwhile, Yang Kang, who Guo Jing has come to trust, has yet to reveal the full extent of his treachery.

Count Seven, Zhou Botong, and Guo Jing rushed out of the cabin and were shocked to find the water already up to their shins. They ran for the mast and shimmied up it. Count Seven snatched a couple of deaf and mute sailors along the way, pushing them up in front of him. From up high, they looked down and watched as the water churned, rushing over the deck and filling the boat. It was all happening so fast, they did not know what to do.

“Old Beggar,” Zhou Botong called to Count Seven, “Heretic Huang is quite remarkable. How did he build this boat?”

Guo Jing was about to answer when a loud crack echoed around them. The boat was breaking in two! The sailors lost their grip and fell into the raging water.

Zhou Botong went after them, turning somersaults in the air as he fell.

“Old Urchin!” Count Seven Hong called. “Do you even know how to swim?”

At that moment, Zhou Botong’s head popped up from beneath the water. “I’ll have to give it a try…” he said, and laughed.

The wind was roaring so loudly, they could barely hear each other. The mast was leaning at such an angle that it would surely soon be touching the water.

“Boy!” Count Seven called out to Guo Jing. “The mast is joined to the hull. We need to snap it. Come on!” Together, they struck at the center of the long wooden pole. It may have been honed from one solid trunk, but how could it withstand the combined forces of Count Seven Hong and Guo Jing? After a few sound blows, it let out a loud crack and relented. They held tight as what remained of the mast fell into the sea below.

They were leagues away from Peach Blossom Island. In every direction, waves rose as high as mountains and there was no land in sight. Count Seven was secretly worried. Without food or fresh water, and with no prospect of being rescued by a passing ship, they would be dead within days. Their martial skills were worthless, out at sea. He gazed into the distance. No sign of Viper Ouyang’s boat. Just then, laughter interrupted his thoughts. Zhou Botong.

“Lad,” Count Seven said, “let’s go fetch him.” With one hand clutching the mast, they each used their other to paddle in the direction of the sound. The waves towered above them and, for every few feet they moved forward, they were quickly pulled back nearly the same distance.

“We’re coming!” Using his internal strength, Count Seven projected his voice over the sound of the roaring water between them and the Urchin.

Zhou Botong’s reply came back to them: “I’m now a sea urchin, pickled in brine!”

Guo Jing could not help but laugh. The old man was still able to make jokes in a situation like this? He certainly deserved his nickname. They were still separated by a hundred feet of billowing sea, but Guo Jing and the Old Beggar raged against the waves and slowly managed to edge closer to their friend.

Once close, they saw their friend had tied planks of wood to his feet with some rope from the rigging and was treading the water using his lightness kung fu. The water was getting the better of him, however. He may have looked as if he was bobbing leisurely on the surface, but in fact it was an incredibly tiring way to traverse it. And yet the Urchin looked as if he was enjoying himself, seemingly unaware of the severity of their plight.

Guo Jing looked around. The boat had vanished, its crew buried at sea.

“Aiyo!” Zhou Botong suddenly called out. “The Old Sea Urchin might be about to meet a terrible end.” The fear in his voice was unmistakable.

“What is it?” Count Seven and Guo Jing cried in unison.

“Sharks! A school of sharks!” Zhou waved his hand toward the distance.

Guo Jing had been raised in the Mongolian desert; he knew nothing of sharks or how fierce they were, but the change in Count Seven’s countenance was enough to make him wonder what manner of monster they must be that they should frighten two such mighty men of the wulin.

Count Seven gathered his qi to his hand and snapped the end of the mast clean off. He then divided this end piece in half, to make two large cudgels. Just then, a sound pierced the air and a shark’s head appeared amid the spray, its rows of razor-sharp teeth glistening in the sunlight, before disappearing back under just as quickly.

Count Seven threw one of his makeshift weapons toward Guo Jing. “Aim for the head!”