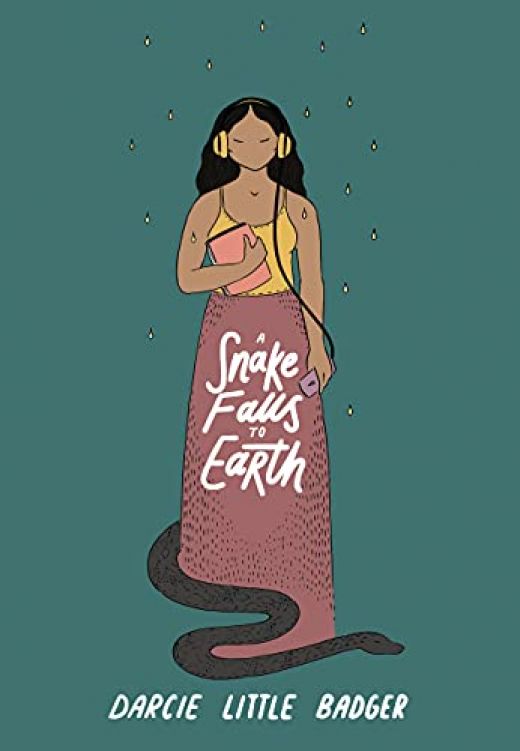 Nina is a Lipan girl in our world. She’s always felt there was something more out there. She still believes in the old stories. Oli is a cottonmouth kid, from the land of spirits and monsters. Like all cottonmouths, he’s been cast from home. He’s found a new one on the banks of the bottomless lake. Nina and Oli have no idea the other exists. But a catastrophic event on Earth, and a strange sickness that befalls Oli’s best friend, will drive their worlds together in ways they haven’t been in centuries. And some will kill to keep them apart. Darcie Little Badger introduced herself to the world with Elatsoe. In A Snake Falls to Earth, she draws on traditional Lipan Apache storytelling structure to weave another unforgettable tale of monsters, magic, and family. It is not to be missed. 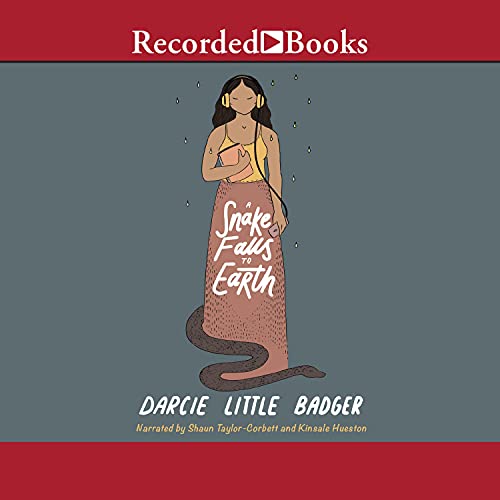 n the hospital bed, her delicate body cradled between thin white pillows, Rosita dreamed. Pictures in metal, plastic, and wooden frames surrounded her, displaying images of friends and family, giving the appearance of an audience. However, the only visitor in the room was Nina, who sat on a tin chair beside the hat rack-shaped IV pole.

Nina couldn’t stop looking at the sepia-toned photograph in an oak frame. Propped on the window ledge, it featured a portrait of Great-Great-Grandmother Rosita as a young woman. The picture came from an era long before digital cameras. In those days, people posed in front of a boxy camera and had to wait days to learn whether they’d blinked. In her portrait, young Rosita wore a hundred strings of pale seed beads around her neck, against her buckskin-clothed chest. Some had glinted, each glass bead a mirror for the sun. Young Rosita’s fine black hair had symmetrically framed either side of her face. With dark, intense eyes, she’d stared directly at the camera lens, as if challenging the photographer to blink first. In most old-timey photos, the subjects didn’t smile, but young Rosita’s lips quirked in the suggestion of stifled laughter, as if she’d remembered a joke, one she could barely wait to share.

In the hospital room, Rosita’s hair fanned across her pillow in thin white wisps. Her eyes, now opening slowly and wearily, were sunken; advanced age had sculpted her face against the contours of her skull, revealing sharp ridges that had once been hidden by plump cheeks. Without her dentures, Rosita’s thin lips curled inward. Rosita looked toward Nina. Did she need something? Water? More medicine? In anticipation, Nina opened the speech-to-text translation app on her phone.

“Don’t worry,” she said. “Dad’s coming back soon, and after lunch, Grandma will visit.” Nina’s father was speaking with doctors beyond the closed door. “Are you okay for now? A … abuelita?” Great-Great-Grandmother didn’t speak much English. Unfortunately, Nina knew even less Spanish, but her attempt to communicate worked, because at the word Abuelita, Rosita’s lips quirked, creating the same anticipatory, gentle smile that shone from the old photograph.

“Quieres escuchar una historia?” she asked, her voice raspy but strong. The translator on Nina’s phone automatically typed out the question: Do you want to hear a story?

Nodding, Nina scooched her chair closer, flinching at the nails-on-chalkboard screeeeech of metal legs scraping against the smooth white floor. Rosita patted her cradle of pillows, finding a gray remote control between them. One press of an arrow-shaped button caused the back of her bed to lift with a soft mechanical whir, gently raising her into a sitting position.

As Rosita began to speak, it occurred to Nina that the app was an imperfect interpreter, despite its 4.8-star rating and how it had worked for her in the past. Most of the story Rosita was telling now was being classified as an “unknown language.” How was that possible? The app had advanced linguistic AI and could understand thousands of global dialects. Occasionally, Rosita used a Spanish phrase, but they were so sporadic, Nina couldn’t piece together the story—history?—using the Spanish translations alone.

However, Nina didn’t dare interrupt her great-great-grandmother. In her nine years on earth, she had never heard the elder speak like this before, as if each word was connected, one flowing into the next. At last, her voice raspy with overuse, Rosita said two last words: el pesadillo. In the silence that followed, she turned away, closed her eyes, and snuggled back into her pillows.

According to the translator, el pesadillo meant “the nightmare.”

“Did you have a bad dream?” Nina asked. Gingerly, she touched Rosita’s vein-threaded hand; finding it to be cold, Nina entwined their fingers together. “Abuelita?”

This time, there was no smile. Just deep, steady breaths.

“Abuelita? Are you okay?” How could she ask that in Spanish? The word bien meant “good,” right? “Are you … bien??” Nina started panicking. “Dad! Dad, help!”

In an instant, her father and a nurse in pink scrubs jumped into the room—they must have been standing right beyond the door. Nina’s father wore his best pair of tattered blue jeans and a black felt cowboy hat, the fancy one embellished by yellow and red beadwork around the rim. “What’s happening?” he asked.

The tension seeped from the nurse’s stance. “Oh, honey,” she soothed, pressing a button on the bed that made it flatten out, “your great-great-grandmother gets very tired, but that’s okay. She needs lots of rest to recover.”

“That’s great! She’s feeling like herself again.” Rosita was an entertainer, the keeper of ten thousand stories, each stranger than the last. Now and then, she’d share one with Nina, and though she was sure much of the nuance was lost in translation, the app had usually been able to capture the essence of her words.

“Do you know what this means, Dad?” Nina held up her phone, sharing the jumble of nontranslated words and translated Spanish.

“Hm.” Her father stepped near the window, waving Nina close. After studying the screen, his brow split by a vertical wrinkle of concentration, he guessed: “It may be an Apache dialect. Rosita’s parents spoke Lipan, ’round when our people had to go culturally incognito for survival.”

“Shh,” her father hushed, glancing across the room, where the nurse in pink was taking Rosita’s blood pressure. “Don’t wake her up.”

“Sorry,” Nina whispered. “I just didn’t realize Rosita understood it, too.” Years ago, Nina’s parents taught her that Lipan needed to be “revitalized”—people knew phrases, simple sentences, and words, but nobody spoke it fluently. Not even Rosita. Plus, that timing didn’t make sense. If baby Rosita had survived the U.S. government’s attempts to slaughter Texas Natives, she’d been alive during the 1800s, which would make her over 150 years old.

Sure, Nina’s family tree had a lot of centenarians, but humans didn’t get much older than 100, right? Was Nina in the presence of a record-breaking elder?

“I didn’t, either,” Nina’s dad said, and kept reading the story transcript. “The spelling’s messed up, but that’s Lipan for ‘home’ …” He scrolled through the wall of text, pausing near the end. “That phrase probably means ‘animal person.’ Gawd, what a treasure. Save her words, okay? We may never understand, but …” Now, he turned to regard the sepia portrait in the oak frame. “… it’d be a shame to lose them.”

After that morning, Great-Great-Grandma Rosita spent a week longer in the hospital, surrounded by her photographs and family. When awake, she told fanciful, ancient stories about the days when humans and spirits lived together. Stories with titles like “Coyote Person Traps the World’s Sweetest Ballad in a Locket” or “Clever Sisters Escape from Kidnappers and Spend the Winter with a Groundhog Family.”

On the last day, when Rosita was at her strongest, Nina prompted: “Abuelita, um, what about el pesadillo? Que es … la historia … del pesadillo?”

The smile again. Slight, knowing. And gone just as quickly, as if carried away by a flood of sorrow. When Rosita spoke, she tilted her head toward Nina’s phone, which translated:

That was the last story my mother told me. Remember, she said. Creator, I was so young when my parents died. Now, I carry sounds without the meaning. Isn’t that sad?

“¿Cuántos años tienes?” Nina whispered, scooting to the edge of her seat. In response, Great-Great-Grandmother only shrugged.

Later that year, Rosita died in her home. It happened peacefully, everyone said. As if she had simply decided, “Tonight’s the night,” shut her eyes, and strolled into the underworld during a gentle dream. Born among family in the tumbleweed-spawning desert, Rosita had no official documents listing her birth date. But when Nina’s father removed her portrait from its frame to scan the image for her wake, he found a single date written on the back: 1894.