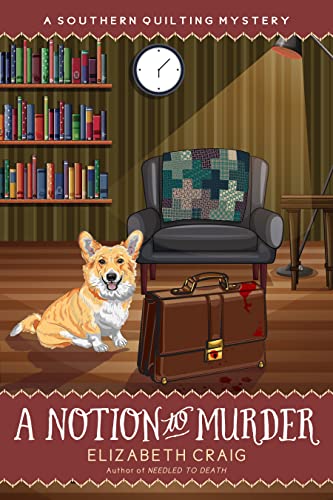 Life gets stressful when someone takes a notion to murder.

Lester Dawson is a wealthy man. Unfortunately, he believes his wealth gives him certain rights—especially when it comes to his family. He meddles, coerces, and bullies. This means his children and his long-suffering wife aren’t the fondest of him sometimes. But for Lester, being popular isn’t as important as being influential . . . and controlling.

When his 80th birthday rolls around, the family grudgingly plans a celebration. However, the festivities are cut short when Lester is found in his library—quite dead.

Beatrice becomes pulled in since one of Lester’s children is a quilting friend of hers. Can Beatrice figure out who killed Lester before someone else takes a notion to murder?

Beatrice gratefully took a sip of her coffee. She was at June Bug’s bakery and it was quite early in the morning. Sometimes Beatrice was an early riser and sometimes she slept a good deal longer than she intended to. But today she was sitting with her friend, Posy, at the bakery before Posy had to open her quilt shop, The Patchwork Cottage, for the morning. The sun was coming up and the clouds looked like cotton candy in the sunrise over the mountains.

Posy also seemed a little sleepy, despite the fact the early hour was part of her regular routine. She gave Beatrice a smile. “Maybe a little sugar will help wake us up.”

Beatrice quirked an eyebrow. “Should we doctor our coffees? Mine already has a generous amount of sugar in it.”

“No, I mean we should get doughnuts. Maybe the powdered sugar ones.” Posy’s eyes lit up at the thought.

Beatrice had the feeling that would definitely wake her up. However, when she was on sugar highs, she found herself crashing later on, often at inopportune times. “Maybe we should go with just a little sugar. Like a muffin.”

Posy looked over at the display counter, her blue eyes wide. “The blueberry ones looked amazing, didn’t they? Blueberries were practically popping out of them. And they had some sort of sugary topping on them.” Posy was clearly completely focused on the thought of sugar.

Rowesa, who was June Bug’s worker, grinned at them. “It’s a sugary cinnamon crumb topping.” Rowesa’s daughter and June Bug’s niece had become fast friends and so had Rowesa and June Bug. Since they were both solo caregivers, they helped each other out by watching the kids.

The delicious description of the blueberry muffins convinced Beatrice and Posy that they both wanted one. Or one to start out

with. They looked to Beatrice like the kind of muffins that might quickly multiply on her plate as she went back for seconds or thirds.

“Where is June Bug this morning?” Beatrice asked Rowena casually as she rang them up.

Beatrice said, “I didn’t realize June Bug was still making deliveries. I’d think folks would just come in to pick up their order.”

Rowena nodded. “Usually, that’s the way it goes. But she still delivers the bigger cakes—wedding cakes, for sure. And this particular cake had enough layers that the family asked if she could deliver it. I totally get it—I’ve transported cakes before and they slid all over my car and ruined them. But June Bug has her method for doing it. She makes sure the cake is secured to the platter with extra buttercream icing. Actually, she uses more than one cake board to make sure it's really stable. Then she puts the box on a yoga mat on the floor of the car.”

“A yoga mat,” said Beatrice. “I’d have never thought of that.”

“Who’s having the major birthday?” asked Posy. “It sounds like someone is having a big party.”

“It’s for Lester Dawson,” said Rowena, but she said it more like a question. “I don’t think I know him. It was a pretty elaborate cake, though. You know how beautiful June Bug’s cakes are. He’s turning eighty-five.”

Beatrice and Posy settled back at their table as the door opened and another customer came in. Beatrice said, “So Posy, do you have anything fun coming up? I need some ideas. Wyatt and I need to shake things up a little bit. I think we’ve gotten wedged into our routine. It would be great if he and I could do some short trips or something. Maybe just a couple of days away.”

Posy’s bright blue eyes widened. “Oh, I forgot to tell you. Cork and I are planning a big anniversary trip. We’re going to go to Yellowstone and the Grand Tetons!”

“That sounds wonderful, Posy! I know you and Cork are huge nature lovers. You should really be able to see some great wildlife

over there. How much planning is the trip taking?”

Beatrice opened her eyes wide. “Really? It takes that much planning?”

“Just one part of it does. To get reservations to stay inside the national park you have to make them right when they open them up to the public or they’re already gone. So we got our lodging reservations and our plane tickets a long time ago. But now we’re making lists of our top places to see and where we should eat and that sort of thing. It looks like such a fun trip. You know how we love sitting out on our deck and watching the birds and the deer in our yard. This will be watching animals on a big scale.”

“You and Wyatt should do it!” Posy thought for a moment. “Why don’t you come with us? We’d have so much fun.”

“It’s not that romantic. It’s Cork.” Posy had a mischievous smile on her face that made Beatrice laugh again. Cork wasn’t exactly anyone’s idea of a romantic hero with his crusty manner and bald head. But he was kind, and he and Posy always got along marvelously together and had many of the same interests.

“Just the same, I think Wyatt and I will have to dream up our own trip. Maybe we’ll make it to Yellowstone one day, but I don’t see us making that trip anytime soon. The main problem is that it’s so hard to get Wyatt away from Dappled Hills.”

Posy nodded in an understanding way. Wyatt was the minister of the Dappled Hills Presbyterian church. There weren’t any associate ministers (there had temporarily been one, but he’d moved on to another church in a different town) so Wyatt was kept very busy with their active church. If Wyatt took time off, he called up a substitute minister from a nearby town. It wasn’t the perfect solution, at least not to Beatrice. She felt a little selfish, but she’d like to not have to share Wyatt with the congregation quite as much as she did.

“Wyatt always does such a wonderful job with the services and all the activities at the church,” said Posy. “And the Bible studies and youth group and mission trips.”

“I have a feeling there’s a but coming,” said Beatrice dryly.

“It’s just that some of us worry a little over him. Are we all burning him out? I do fret over it, Cork can tell you. On top of all the regular, weekly duties, there are those unexpected duties, too.”

“And the funerals. Sometimes I think the funerals are more complicated than the weddings.”

“You’re thinking the church should be looking for another associate minister,” said Beatrice.

Posy quickly added, “We all think Wyatt is just perfect! But, well, he’s not getting any younger and surely he would like to have more opportunity to just stop and smell the roses once in a while.”

Beatrice reached out and gave Posy’s hand a quick squeeze. “Right you are, Posy. Thank you. I think that’s a subject I should bring up with Wyatt soon.”

Posy said, “After all, you want to spend as much fun time with your little grandbaby as you can. You could go to the beach with him—that would be so much fun. Building sandcastles, splashing in the waves. That wouldn’t keep Wyatt away from the church for too long and it would be a nice break for you. How is Will doing, by the way? I bet he’s growing like a weed.”

Beatrice chuckled. “Lucky for you that you’re talking with me and not Meadow. Meadow would have a slideshow presentation prepared about our co-grandson. And, yes, he’s doing great, thanks. He’s doing a little better with his talking now.”

Posy’s bright blue eyes twinkled. “Adorable. The last time he was in the shop, he was saying ‘no’ a lot.”

“Oh, what’s your grandma name?” Posy tilted her head to one side. “Somehow I can’t quite picture what you might pick out as your name.”

“Okay.” Posy peered closely at Beatrice as if the answer might be written somewhere on her face. “Mimi? No, never mind. I can’t really picture you as a Mimi. Nana?”

“You got it!” said Beatrice, looking a little surprised.

“Well, there are only so many names. Plus, Piper calls you mama, so it was a good guess.”

“Very perceptive of you, Posy. Unfortunately, Will hasn’t quite figured it out yet. He’s been mangling it in the cutest of ways. He wrinkles his little nose and blurts out something really garbled. Maybe ‘amma’ or ‘granna’. It doesn’t consistently seem to be one thing.”

Posy asked, “Is that happening with Meadow, too?”

Beatrice made a face. “No, and it’s maddening. I’m convinced that Meadow has a recording of her saying ‘granny’ that she plays over and over while Will naps.”

Beatrice’s cell phone rang and she pulled it quickly from her purse. She frowned. “It’s June Bug . . . that’s odd.”

“No worries at all. I’m actually here with Posy at your shop,” said Beatrice.

“Of course I can,” said Beatrice, fumbling to remove her keys from her purse. “Are you at home?”

“Oh, right—Rowena said you were making a cake delivery there.” Beatrice paused. “Is everything all right?” June Bug said in a wavering voice, “No. No, it’s not. Lester Dawson is dead!”