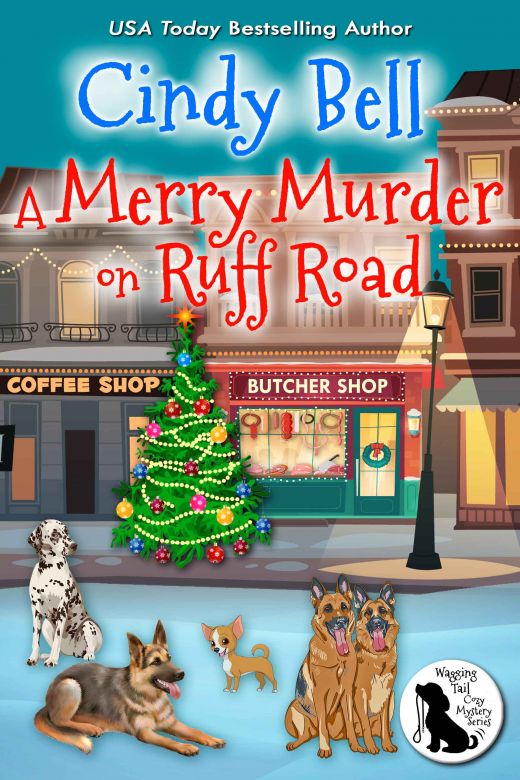 It is almost Christmas and the beautiful town of Dahlia is full of Christmas decorations and holiday cheer. Nikki Green is in the festive spirit and is enjoying spending time with her furry companions and her best friend and partner in crime, Sonia Whitter. Her romance with hunky Detective Quinn Grant is becoming more serious and she is loving spending time with him and his adorable rescue Dalmatian, Spots. Everything is coming together perfectly.Until… Marlo, the owner of a local butcher shop, lands up murdered. Nikki and Sonia decide to help the murder investigation along and with their trusty companions by their side do a little sleuthing of their own. But the deeper they dig the more suspects and secrets they reveal.It’s a race against time to find the murderer so that Christmas can go off without a hitch!Grab A Merry Murder on Ruff Road by USA Today and Wall Street Journal Bestselling Author Cindy Bell to unleash a page-turning cozy mystery that will keep you guessing until the end!

“Easy boys.” Nikki Green pulled back just enough on the leashes of the two German Shepherds to create space between them and Princess. She knew the two larger dogs meant no harm, but Princess’ yelp and crouched stance indicated she didn’t know that yet.

“Who are these handsome fellows?” Sonia Whitter crouched down beside Princess and held out her hand to the two dogs.

“Rocky and Bruno.” Nikki laughed as she rolled her eyes. “Cute names, right?” “Absolutely.” Sonia laughed as she gave them each a pet. “I didn’t know you were taking on any new dogs. They are German Shepherds, aren’t they?”

“I didn’t either. Yes, they are German Shepherds, the same as Coco. I stopped by the animal shelter this morning to help out with breakfast and walks, and these two were there with Petra. A friend of hers was pet sitting them and he has broken his leg. He is going to need surgery, so Petra has them at her house and she asked if I could help out by walking them.” Nikki winked at the two dogs that panted happily. “Of course, I agreed. The dogs ran right over to me.”

“Of course they did. You’re such a loving person, a dog person, they can sense that.” Sonia met her eyes and smiled. “Nikki, I admire how you keep growing your business, and now you’re helping Petra more at the animal shelter. Don’t you think you’re taking on a little too much, though?” She grinned as Princess took a few steps towards the bigger dogs, then let out a sharp bark. “Oh, someone wants to let them know who is in charge.”

“Oh, they’ll figure it out soon enough.” Nikki laughed as she looked between the three dogs. She glanced up at Sonia and shrugged. “I’m happy to help out Petra, she does so much. Besides, I love being with the dogs and it’s good for me to stay busy. Especially at this time of year. Growing up in Dahlia, Christmas was always a special time. But since my family has all moved away, it’s just not the same.”

“I know what you mean.” Sonia sighed. “I’ve decided to stay close to home this year. But I am planning a holiday party at the Dahlia Hotel. I’m going to drum up donations for some local charities, and of course the shelter. I’m going over tomorrow to do a menu tasting and give final approval for the meal. I would love it if you would join me.”

“Thank you, I’ll be there.” Nikki took Princess’ leash from Sonia and added it to the two she already held. “I just really wanted to help Petra leading up to the holidays. After how hard she’s been working, I know she needs it. Plus, I love getting to see all the puppies and kitties she has at the shelter. There are quite a few new rescues that have come in.”

“Well, it sounds very busy this year.” Sonia gave the German Shepherds another pat. “It’s nice to meet you, Rocky and Bruno. I’m sure you will fit in just fine.”

“How is Spots doing?”

“Great. But it has been an adjustment for Quinn.” Nikki grinned. “Spots gets him up pretty early to go out, and his plan to keep Spots on the floor on his pillow, and out of his bed, has not worked out. Spots also snores.”

“We should get going, I have a few errands to run after the walk.” Nikki smiled. “I have to stop at the pet store to pick up some Christmas presents for the dogs. I need to make sure I don’t leave it till the last minute. I don’t want to end up with nothing to give out to the dogs for Christmas.” She lowered her voice and grinned. “The rawhide chews I gave out last year were not a hit. I had a few complaints about the mess the dogs made with them.”

“Oh, I bet.” Sonia laughed and clapped her hands together. “Princess had hers scattered all over the house for weeks.”

“Oops.” Nikki grinned, then hurried the dogs down the driveway. Sonia was right about one thing, she did have a tight schedule, and if she didn’t stick to it, she would never get everything done.

As Nikki walked briskly in the direction of Quinn’s house to pick up Spots, she noticed the array of decorations that adorned the lampposts and fences throughout Dahlia. She loved how much effort everyone made to celebrate the holidays in the town. Each red bow, each string of tinsel wrapped around twinkling lights, brought up memories of her childhood in Dahlia. She smiled to herself as she recalled the empty lot being turned into a skating rink. The sharp sound of the ice skate blades cutting against the ice still sent a shiver along her spine.

Even after her brother started traveling across the country, working along the way, and her parents had moved away from Dahlia, she stayed, mostly because she couldn’t imagine anywhere else being home. Her small apartment was just enough space for her. Her assortment of clients kept her financially afloat, and her love for their dogs fulfilled her. There wasn’t much about her life in Dahlia that she didn’t love, and since Quinn had become such a big part of it, she hadn’t ever been happier. It still surprised her at times that she had ended up reunited with her high school crush, and that he had fallen as hard for her, as she had for him.

Despite her rush to get everything done, her heart warmed as she acknowledged just how lucky she was.

Once Nikki had collected Spots, and Coco, she steered the dogs towards the park. Many of her usual dogs were off on vacation with their owners. The small pack she walked made it easy for her to integrate the new dogs. Spots and Coco gave each of the dogs a sniff, then seemed more interested in the grass they strolled through. Nikki was pleased that Sonia had become more relaxed and let her beloved Chihuahua walk with the larger dogs. Nikki did take Princess on a few extra solo walks and Sonia would often join them. After their walk through the park, Nikki dropped off Coco and Spots, then checked her phone. There were no messages and she could spare a few minutes, so she decided instead of taking the dogs straight back home, she would walk through the shopping area to see more of the Christmas decorations.

“All right, we’re taking a little detour.” Nikki walked towards the center of town. She relaxed as she walked down Ruff Road, the main shopping strip in Dahlia.

The street teemed with cars and pedestrians despite the early hour and the cool temperature. Holiday shopping was in full swing. Nikki smiled and waved to a few of the people she knew. There weren’t many that she didn’t. She eyed a collection of people gathered around the window of one of the clothing shops. The front window displayed a wintry scene, including snowmen, gingerbread houses, and reindeer.

The sight of the picturesque display immediately put her in the festive spirit.

As Nikki walked past Marlo’s Butcher Shoppe, she was reminded that she wanted to pick up some bones that she’d ordered for Spots. He loved the raw bones and she loved treating him. The pup held a special place in Nikki’s heart, and her heart warmed whenever she thought of how Quinn had recently adopted him. He had quickly stolen both of their hearts and become a part of Quinn’s family. Although Spots was technically Quinn’s dog, she often thought of him as hers as well.

Nikki looked at the dogs happily sniffing each other. They certainly seemed to be getting along.

“Good boys and girl.” Nikki crouched down and gave each dog a pet. As she began to stand up, she heard the door to Marlo’s shop open. She turned towards it and saw a man who she recognized as Scott, the delivery driver for Marlo’s shop, come running out of the shop and straight towards her. She tried to step out of the way, but before she could he barreled into her. He knocked her off her feet and she landed hard on the ground with a thud.

“Stop him!” A tall, slender man she recognized as Gavin, a cook at the local diner, came running out of Marlo’s shop and straight past her towards Scott. “Stop!” He shouted as he ran after him. “Stop right there!”

Nikki was in a daze as she got to her feet. Scott continued running. Followed by Gavin close behind.

“Get back here!” Gavin gasped for air as he attempted to shout.

The collision had knocked the wind out of Nikki. She wasn’t sure what to do but the decision was made for her when the dogs tugged at the end of their leashes and started running towards Scott and Gavin.

The faster the dogs ran, the faster Nikki ran. She had no choice but to continue to run after the two men, as the two German Shepherds led the way. But it wasn’t enough for Rocky. He gave a hard, sudden lunge and his leash broke free of her grasp. As soon as he sensed the freedom, he snarled and launched himself forward, running past Gavin with ease and quickly covering the distance between himself and Scott.

“No Rocky! Sit!” Nikki gasped as she chased after the dog.

Before Nikki could reach him, Rocky jumped up into the air and landed hard against Scott’s back.

Scott stumbled and fell down onto the grass beside the sidewalk. Rocky stood on top of him. Bruno barked and whimpered as he attempted to break free as well. “Stop! Please!” Scott squirmed on the ground but stopped moving when a loud growl emerged from Rocky.