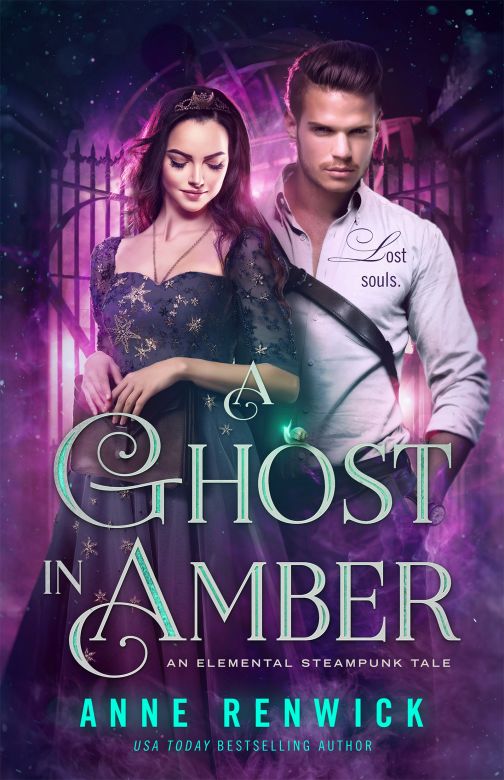 On All Hallows’ Eve, Lady Diana Starr is poised to uncover a lost zoological treasure when an unfortunate steam accident threatens to destroy the chance of a lifetime. Locked in a race with her arch nemesis, she must toss aside all decorum and break rules—lest he destroy her dreams. Again.

Trapped in the past and doomed to re-live the night of his murder, Lord Leo Wraxall awakens at sunset. This year, something is different. Might an unexpected time traveler who arrives at his hidden workshop help alter his cursed fate?

But destiny refuses to relax its grip; the stars cannot be realigned. As adversaries threaten to snatch away a final thread of hope, can Diana and Leo forge a new path into the future? Or will they be haunted for eternity by what might have been?

“Cancelled?” With a single word, weeks of preparation snapped like a copper telegraph wire subjected to an unexpected gale. “On such short notice? What of the houseguests, the extensive preparations?”

A current of anticipatory excitement had electrified Lady Diana Starr ever since the invitation to the event arrived in the post. But now, with a pop and a fizz, her energy drained away. To be so close, three miles from the chance of a lifetime, yet denied access?

Her mind rebelled. Absolutely not. There must be some mistake. Spending the evening in this ancient, soot-stained pub listening to increasingly intoxicated locals swap ghost stories was not in her plans.

Tonight was the night. The mysteries of Batcote Hall beckoned, and Diana would not be deterred. In that musty old house, a dead man’s field notes moldered upon shelves, his collections crumbling in collapsing cardboard boxes. All of it covered in strata of dust, begging to be liberated and dragged into the light of day.

While others danced the night away, she’d meant to slip into the library. Were she so fortunate as to pinpoint the location of the long-lost treasure, a quick inventory to assess its zoological value would have been in order. With a firm grasp of the materials in hand, she’d planned to approach the current Lord of the Manor to make an impassioned presentation, to detail the reasons he ought to grant her exclusive rights to assemble a catalog of his uncle’s collection whilst publishing a series of groundbreaking monographs.

But their hired carriage had not arrived, stranding them upon flagstones of blue-gray Wilmcote Limestone before their inn. As ladies did not proceed to a ball on foot, no matter the location, they’d retreated indoors, to the pub, where gossip had informed them of a misfortune of grand proportions.

Diana slid a hand over the silver spangles sewn onto the satin of her midnight-sky gown. Her fingers worried the bright punched metal circles that formed the Pleiades, the seven sisters. Nearby, Orion took aim. It was All Hallows’ Eve, and she was the night sky. A disguise to satisfy a mother intent upon securing her daughter a husband, a sister insisting upon one last appearance as a paired set, and her own requirements: slipping into shadows unnoticed.

A gentleman wearing a Tudor-styled doublet, hose and a fur-edged cape answered. “I’m afraid our would-be host, Lord Wraxall, is bedridden.” He answered Diana’s question, but directed the entirety of his fawning attention at her sister, Aurora, garbed as she was in a golden gown studded with beads of amber.

Easy to overlook the stars and the moon when the bright morning sun’s rays cast them into the shadows with the coming of dawn.

But Diana had come to prefer the dark recesses. There was much to discover in the nooks and crannies where most never thought to look.

“Bedridden?” she pressed, careful to infuse her question with an appropriate level of concern. “Whatever happened?”

A house devoid of guests, its gardens not filled with lanterns and wandering merrymakers, staff intently focused upon their master. Hazard or opportunity? Her mind whirled, calculating the distance from The Swan Inn to Batcote Hall. Two, perhaps three miles? Walkable. In a pair of sensible shoes. Which were in her travel trunk only a flight of stairs, a hallway and a closed door away.

“From the very beginning, it was a cursed house party,” answered the Tudor courtier. “A near accident during the pheasant shoot, a burr lodged beneath a horse saddle, an angry black cat trapped in Lord Wraxall’s dressing chamber.” His gaze slid past Diana, a sheepish acknowledgement that her status as “unsuitable for marriage” had relegated her family to local accommodations, their invitation limited to the costumed ball. A common occurrence, though the sting had not lessened over time.

“How very gothic.” Aurora leaned in, lightly touching the man’s arm, encouraging him to continue.

“Pages ripped from an overwrought novel,” the courtier agreed, smiling. “But true disaster arrived in the form of farm equipment, involving an engine, a pipe release valve and scalding water. A late sowing of winter rye, though aether only knows why a baron felt the need to drive the steam tractor into the barn himself on the very evening he was to host a costume ball. Instead, the town physician attends his bedside.”

“Is Lord Wraxall expected to recover?” Their mother sagged into a chair beside the fireplace, held upright only by the enormous volume of boiled starch that saturated the silk flowers and vines that twined about her green gown. Terra Mater, Mother Earth, had pinned too many hopes on the baron’s personal, handwritten invitation.

“Too soon to know,” the courtier replied. “But the evening’s festivities are, necessarily, cancelled.” He waved a hand toward the windowpanes. Beyond, a procession of polished carriages and gleaming clockwork horses rattled, clanked and clopped along High Street carrying houseguests away from Batcote Hall.

“What a shame.” Aurora batted her eyelashes and tossed him a pearly smile, unable to suppress an instinct to flirt with a handsome gentleman despite the faceted yellow diamond engagement ring that adorned her finger. “And here I was looking forward to sinking my teeth into a candied apple.”

The man all but swallowed his tongue.

“Behave,” Diana whispered, with a pinch to the back of her sister’s arm that elicited a yelp and a grateful glance from their mother. Aurora’s wedding was but weeks away, and the wealthy industrialist who’d slid that ring onto her finger bristled in the company of fawning gentlemen with the audacity to address his fiancée with any manner of familiarity. Theirs was a love match threaded with jealousy that only seemed to fuel the fire of their romance.

From their mother’s point of view, the sooner the wedding, the better. Lest another sister fall into ruin before her future was secured.

Irritated, Diana pulled back her shoulders. Hers was a regrettable mistake, one that refused to stay in the past, following her from one society event to another, forever nipping at her heels, while the other half of the guilty parties suffered no such consequences. Her only consolation was the knowledge that Hector Godfrey and his wife did not number among the houseguests, though it rankled that her rival had been invited at all.

Impossible to forget the evil spark that had flared in his beady eyes when he’d overheard her conversation with Mr. Rachet in the museum’s Shell Gallery—curse his booming voice—describe the contents of a letter sent to him some twenty years past. As such, the same bare bones facts had also been made available to Hector.

Earlier, a stroll through the village had brought the three of them within eyeshot, an exchange of narrow-eyed and cold glares their only interaction. But it was enough to know her nemesis possessed the same goal, that he would seek to thwart her every effort with the baron. As always, the prize was publication. This time, however, the stakes were higher, with no guarantee either of them would win.

A competition halted, or at least delayed, by the lord’s misfortune.

“Many guests adjourn to the ballroom of the Bristol Royal Hotel, though that is quite a distance away,” the courtier continued. “A few plan to attend All Hallows’ Eve festivities in the town’s assembly hall, a location not more than a few steps along the High Street. Might I offer to escort three beautiful ladies to this local venue?” He crooked an arm.

Grinning, Aurora rose onto her toes, but Mother quickly dashed her hopes. “How very gallant of you, sir, but I’m afraid we must decline.” She pressed a limp hand to her forehead. “I fear I’m developing a megrim and must retire for the evening. Nothing will bring me more comfort than the company of my daughters.”

“Our loss. May your ills past swiftly.” The courtier executed a bow worthy of Henry VIII at Hampton Court Palace then took his leave.

“Shall I order a bath sent up to your room?” Diana asked.

With a nod, Mother gathered up the layers of petals and tendrils that comprised her gown and stood, pointing her slippers in the direction of the staircase. Aurora sighed, her radiance dimming as she moved to follow, disappointed at her lost chance to play matchmaker for her sister.

Diana caught her elbow and spoke in a low voice. “I will be out this evening. Cover for me.”

“It’s only fair, I suppose.” Aurora cast a longing glance toward High Street. “Perhaps there will be landed gentlemen in attendance.”

A remark with which many would agree. At Diana’s advanced age of twenty-five, the expectation was that matrimonial exertions ought to be her focus, not the composition of yet another paper detailing the ancient familial relationships of gastropods as defined by the conispiral torsion of the perpendicular axis of the foot.