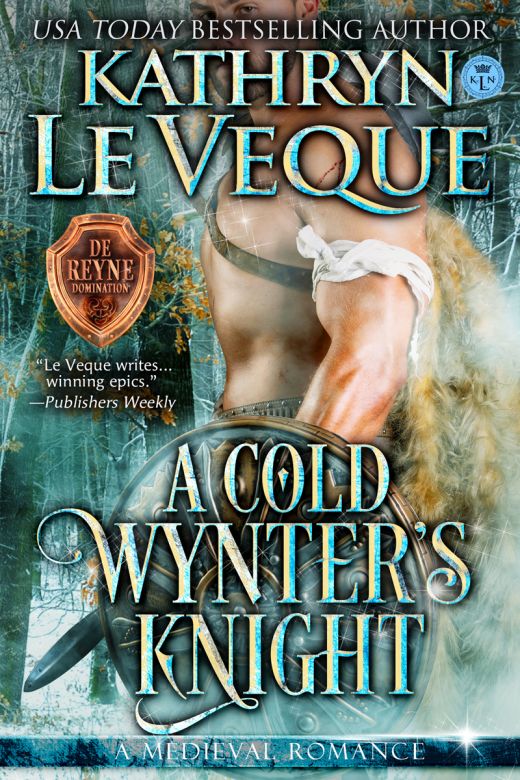 1230 A.D. - Dogged by sinister rumors courtesy of a jealous older brother, Gage de Reyne is the knight on the tournament circuit known as the North Wind – destructive, powerful, and cold as ice. But a chance meeting with a childhood friend Lady Wynter de Thorington brings about a spark that could melt the glacier he’s become.Or it could burn down his entire world.Wynter knew Gage as a child and, truth be told, she had quite a fondness for the big, silent, powerful younger sibling of a petty but powerful older brother. She’s heard the rumors, how Gage was driven out because he’d tried to steal his brother’s inheritance, but she simply can’t believe it was true. The Gage she knew was, above all, an honorable lad.An honorable lad who grew up into an honorable, tremendously skilled knight.When Gage and Wynter’s reacquaintance goes from a spark to a roaring blaze, they make a decision that will change their lives forever. Now, Gage is accused of coercing the heiress to the powerful de Thorington fortune into marriage, fortune and power that easily rivals his brother’s. Because of this, it appears that all of the rumors have been true – Gage has his fortune through his wife, but Wynter’s father is working against them to have the marriage annulled. In Medieval England, an annulled marriage is an act of God.And, quite possibly, a death sentence for Gage.Join Gage and Wynter on an impossible and thrilling adventure of tournament glory, passion, and the quest to bring the truth to light for a man who has been very badly slandered. In the end, it’s not the rumors or his prowess on the tournament field that define Gage de Reyne.It’s the sacrifice he makes for the woman he loves.Wynter's cold knight is anything but cold...The de Reyne Domination Series
Guardian of Darkness
A Cold Wynter's Knight
In Dreams
The Fallen One (part of the Dragonblade series)

Note: The House of de Reyne is an older, powerful family, pre-dating the Normans. It is said their origins lie in the Visgoths, their rise to power sometime during the Age of Darkness.

The month of September

“And God said kill your son to prove your love of the Lord!”

The audience was spellbound as the words came booming from a young woman wearing a white beard made from scratchy, uncombed wool held on her face with a string around the top of her head. She wore a red cloak around her shoulders, deliberately dirtied, and she was holding another young woman down on a makeshift altar fashioned from stone and wood.

Something grim was happening smack in the center of a delicate lady’s solar as the young woman clutched a glittering dagger in one hand, holding it aloft.

“At God’s command, Abraham bound his son to the altar and promised to kill him until an angel of the Lord appeared!”

On cue, yet another young woman dressed in flowing white, with a circle of pale flowers around her head, came rushing into the chamber. But the garment was too long and she tripped on the hem, plowing into the young woman with the fake beard and the knife. The knife went flying as both young women crashed into the girl who had her head upon the altar.

They all went down in a heap.

Unfortunately, so did the painted backdrop that was supposed to represent a mountain and clouds. It was a wooden screen used by the lady of the castle from time to time, but her naughty daughters had absconded with it and painted a scene for this great performance. As the girls fell over, they crashed into the screen and it toppled to the floor as the audience screamed with delight and surprise. It was an audience full of girls, none of them more than sixteen years of age, and they leapt to their feet as the performers collapsed to the ground.

They thought it was marvelous.

But it wasn’t so marvelous because it wasn’t planned. The young woman with the fake beard ended up at the bottom of the pile, enraged that her performance had been scuttled. The audience was laughing as they pulled the girls off of her, declaring their delight for the riveting tale of Abraham and Isaac. But the young woman at the bottom of the heap sat up, pulling the red cloak off her face as she faced her unruly audience.

“I’m not finished yet,” she said loudly. “If it wasn’t for the clumsy angel of the Lord, you would have seen a magnificent ending.”

The angel of the Lord, otherwise known as Lady Spring de Thorington, scowled at her eldest sister and the playwright of the family. “It was mostly over, anyway,” she said. “But it is yourfault.”

Spring lifted up the hem of the white garment. “This is toolong,” she said. “I told you it was too long. ’Tis your fault for making me wear it, Wynter.”

Lady Wynter de Thorington’s eyes narrowed dangerously. “You’re as ungainly as a newborn colt,” she said. “Any reasonably graceful person could have worn that robe and not fallen over her own feet.”

“Enough, ladies.” A woman in a white wimple and fine silks was suddenly between them, clapping her hands crisply. “Wynter, get off the floor. More of your guests are arriving, so your performance is over for the day, as inappropriate as it was. You must go and change into your finery.”

Wynter looked at her mother in outrage. “Inappropriate?” she repeated. “It is a story from the bible, Mama. How is it inappropriate?”

Maryann de Thorington, Countess of Ashington, eyed her eldest daughter with limited patience. “I think any tale where you threaten to sacrifice your sister is quite inappropriate,” she said. “Next time, do Ruth or Esther.”

“Next time, I shall do Moses parting the Red Sea!”

Maryann cocked an eyebrow. “As long as there are no knives and no real Egyptians in chariots,” she said. Then she pointed a long finger towards the stairwell of the keep. “And as Moses led his people to freedom, so shall I lead you from this room with my staff to your backside if you do not do as I say. Go.”

With a sharp sigh, one showing her displeasure at a mother who had no regard for her theatrical abilities, Wynter climbed to her feet, pulling off the woolen beard that had turned her chin red with irritation. She also pulled off the scarf she’d had wrapped around her head to conceal her deep auburn mane, glorious red hair that was the envy of every woman from Berwick to Newcastle upon the head of a young heiress who was quickly becoming the most sought-after bride in the north.

In fact, that’s what the celebration was all about.

The excuse was Lady Wynter’s sixteenth birthday, but the truth was that her father was taking advantage of the event to show off his daughter. Having no male children, the Earl of Ashington was going to parade his eldest daughter to the most eligible men in the north like a prized mare. The highest bidder, with the grandest family, the most wealth, and hopefully the best breeding, would be the winner of Lady Wynter Rose de Thorington and the Ashington earldom.

But it was going to take a strong man to manage both.

Wynter had the beauty. She had the breeding. But she was headstrong and quirky, hence the play of Abraham and Isaac. The young woman had been writing stories and acting them out since she’d been very young, only the priests that educated her at the Brothers in God at the Church of the Holy Sepulcher, which was quite a mouthful of a name, insisted she only act out biblical stories. They’d let her do it so long as the plays were holy. If she tried to do something different, she was met with a rap across the hands.

Wynter still feared the Brothers in God, or the Mob of God as her father called them. Nothing guaranteed they wouldn’t kick down the door of Ashleven’s massive keep and take a stick to her if they thought she was doing something they did not approve of. But she feared her mother more than those stick-happy monks, so she had little choice but to obey the woman’s directive.

Her performance, for the day, was most definitely ended.

Unhappily dragging herself up the stairs and into the living quarters on the two top floors of the keep, Wynter’s thoughts shifted from her ruined performance to the arriving guests. That thought alone had her moving a little faster because there was one guest in particular she wanted to see.

“When do you think Gage is coming?” A lass of ten popped out of the first door at the top of the steps, her angelic face upturned. She smiled a toothy grin. “Do you think he shall bring Bull with him?”

Wynter couldn’t help but smile at her youngest sister, Autumn de Thorington. It seemed that the young girl was reading her mind. “Who is asking about Bull?”

“Do you not think he is a little old for you?”

Autumn was coy. She took her sister’s hand and walked with her to her chamber next door. “He is handsome,” she said. “I must marry sometime, you know. Isabella of Angouleme was only twelve when she married King John, who was much older than she was.”

Wynter shook her head as she entered her chamber, tossing aside the red cloak she was still holding. “The royals always marry children,” she said with some disgust. “That does not make it ideal.”

“And you think Bull is going to wait for you?”

“Will Gage wait for you?”

That brought Wynter to a halt. Speaking of Gage de Reyne always brought her to a halt. With a faint sigh, she poured a measure of rosewater into a basin from a pitcher on the table. Her face was irritated from that terrible beard she had been wearing and she splashed it with the rosewater, cooling the inflamed skin.

“Gage is ten years older than I,” she finally said. “He is already a great knight.”

Autumn lay on her sister’s bed, sinking immediately into the feather mattress, made from the finest down. “But he has eyes for you,” she said. “I know he does. I have seen the way he looks at you.”

Wynter was uncomfortable with such talk. She wanted it to be true. The tall, muscular knight with the dark hair and pale, piercing eyes had garnered her attention since she’d first met him when she’d been a small girl. He’d been a youth and had briefly fostered at Ashleven Castle, and he’d taken a special interest in Wynter like the big brother she’d never had, only from her perspective, Gage had never been brother material.