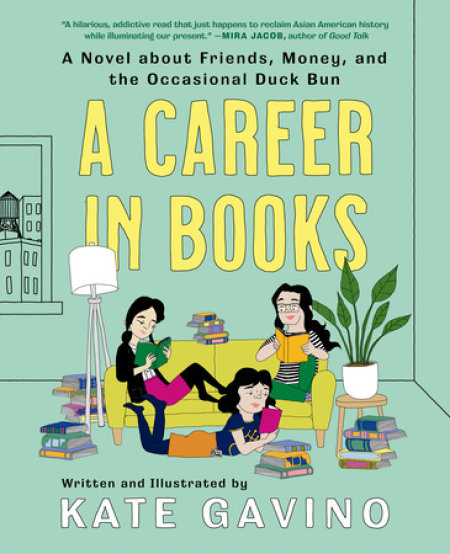 A Career in Books

A Career in Books is a graphic novel for everyone who's wanted to "work with books" and had NO idea what it entailed. It's for those who were taken aback by that first paycheck. It's for those who wanted a literary career even in the face of systemic racism, who dealt with the unique challenges of coming from an immigrant family, and whose group chat is their lifeline.

Shirin, Nina, and Silvia have just gotten their first jobs in publishing, at a University Press, a traditional publisher, and a trust-fund kid's "indie" publisher, respectively. And it's . . . great? ¯\_(ツ)_/¯ They know they're paying their dues and the challenges they meet (Shirin's boss just assumes she knows Cantonese, Nina cannot get promoted by sheer force of will, and Silvia has to deal with daily microaggressions) are just part of “a career in books.” When they meet their elderly neighbor, Veronica Vo, and discover she's a Booker Prize winner dubbed the “Tampax Tolstoy” by the press, each woman finds a thread of inspiration from Veronica’s life to carry on her own path. And the result is full of twists and revelations that surprise not only the reader but the women themselves.

Charming, wry, and with fantastic black-and-white illustrations, A Career in Books is a modern ode to Rona Jaffe’s The Best of Everything, and perfect for fans of Good Talk, Younger, and The Bold Type, as readers chart the paths of three Asian-American women trying to break through the world of books with hilarious, incisive, and heartbreaking results.