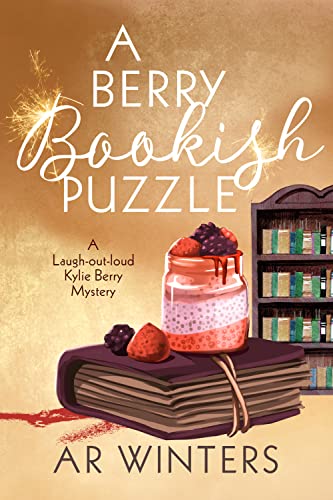 Welcome to The Berry Home: where the food is to-die-for!

Kylie is thrilled when the space next door is finally leased out to a bookshop owner. Unfortunately, opening day doesn’t go as planned. Instead, the bookshop becomes the scene of a murder.

Who could’ve killed Charlie Mccoy, a man of many secrets and just as many enemies? With a murder to investigate and a friend’s wedding to plan, Kylie must call on all her friends to help keep the Berry Home afloat as she scrambles to uncover the truth before it’s too late.

Meanwhile, Brad is left to fend for himself as a newly minted detective, while Gregson and Zoey obsess over their new joint venture.

"The perfect balance of being lighthearted, but still a serious page-turning mystery." - Jaycie D, Amazon.com

"For fans of Janet Evanovich, Rhys Bowen and Jana DeLeon, this is a funny, clean mystery." - Clara B, Amazon.com

A Berry Bookish Puzzle is the tenth book in the Kylie Berry Mystery Series. Though it can be read as a standalone, it's best read in series order.

This is a humorous cozy mystery featuring a strong female protagonist, some unusual friends and family, and a mystery that needs solving! It has no graphic gore, bad language or scenes.
Read more