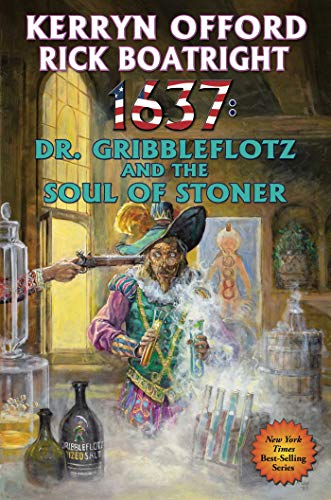 1637: Dr. Gribbleflotz and the Soul of Stoner

A 17th-century alchemist confronts modern science with unintended and amusing results. Another sparkling addition to the multiple New York Times best-selling Ring of Fire alternate history series created by Eric Flint. SCIENCE AND MEDICINE VS. FLIM-FLAMMERY Thomas "the Great Stoner" Stone once performed miraculous surgery upon Phillip Theophrastus Gribbleflotz, the World’s Greatest Alchemist, using his bare hands, no anesthesia, producing no pain, and leaving no scar. It would have been wonderful if it was real. But  Dr. Tom Stone, the face of modern medicine, has been engaging in fake treatments—bringing all modern medicine into question. Phillip, who has learned a thing or two about actual science from those uptime elopers from Grantville, West Virginia, decides to go to Padua and turn his problems into Tom Stone's problems. Meanwhile, the wily Bernardo Ponzi has assembled a team to support his evangelical touring roadshow featuring a light show, faith healing and yet more psychic surgery. Now Gribbleflotz and Stone are on a collision course with the Magnificent Ponzi, who has moved beyond showman-like fakery to causing actual harm to many people. It’s time for Gribbleflotz and Stone to resolve their differences, debunk one of history’s greatest bunko artists, and save the reputation of modern science and medicine from ruin! About Eric Flint’s Ring of Fire series: “This alternate history series is … a landmark…” — Booklist “[Eric] Flint's 1632 universe seems to be inspiring a whole new crop of gifted alternate historians.” — Booklist “. . . reads like a technothriller set in the age of the Medicis . . .” — Publishers Weekly