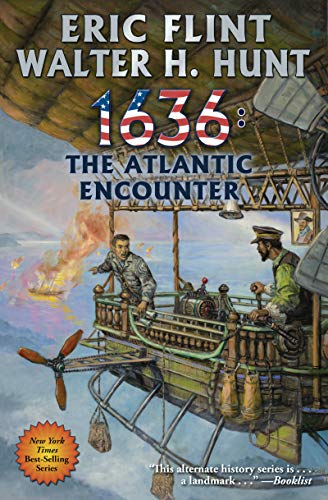 THE BEST-SELLING RING OF FIRE SERIES CONQUERS THE NEW WORLD! It has taken almost five years for the United States of Europe to stabilize its position in 17th-century Europe. Now it turns its attention to the New World, where the English have ceded their colonial claims to France. There are vast lands and rich resources across the Atlantic for any nations powerful enough to rule and control them—and equal incentive for other nations to block their path. The time-displaced Americans know about the future path that led to their own United States in North America, in the other universe they came from. But do they want to repeat that history as it was? Yes, they had democracy—but they are helping to create that in Europe. And they have learned the bitter prices paid for chattel slavery and the near-extermination of the native populations. Knowledge is power. Perhaps a new course can be taken. Accordingly, an expedition is sent to the New World to see just what might be happening there and what might be done. They are armed with their technology, among which are a radio and an airship. More importantly, they are armed with the knowledge of future history and their determination not to repeat the errors of their past. What could possibly go wrong? At the publisher's request, this title is sold without DRM (Digital Rights Management). About Eric Flint: “This alternate history series is . . . a landmark . . . ”—Booklist “[Eric] Flint's 1632 universe seems to be inspiring a whole new crop of gifted alternate historians.”—Booklist "[R]eads like a technothriller set in the age of the Medicis . . . ”—Publishers Weekly About Walter H. Hunt: "A compelling and immersive novel in which every word feels authentic and every chapter draws the reader deeper into the dark and terrifying power of the mind.”—New York Journal of Books Eric Flint is a modern master of alternate history fiction, with more than three million books in print. He’s the author/creator of the multiple New York Times best-selling Ring of Fire series starting with first novel 1632. With David Drake he has written six popular novels in the “Belisarius” alternate Roman history series, and with David Weber he has collaborated on 1633 and 1634: The Baltic War, as well as the Honorverse series entry Cauldron of Ghosts. Flint's latest Ring of Fire novel is 1637: The Polish Maelstrom. Flint was for many years a labor union activist. He lives near Chicago, Illinois. Walter H. Hunt is the creator of the popular Dark Wing space adventure series. He has nearly twenty years experience in high tech as a software engineer and technical writer. His writing reflects an abiding interest in history, his area of college study, but science fiction has been his favorite reading material since he watched Neil Armstrong walk on the moon when he was but a lad. He is an active Freemason and a lifelong baseball fan. He lives in eastern Massachusetts with his wife and daughter.