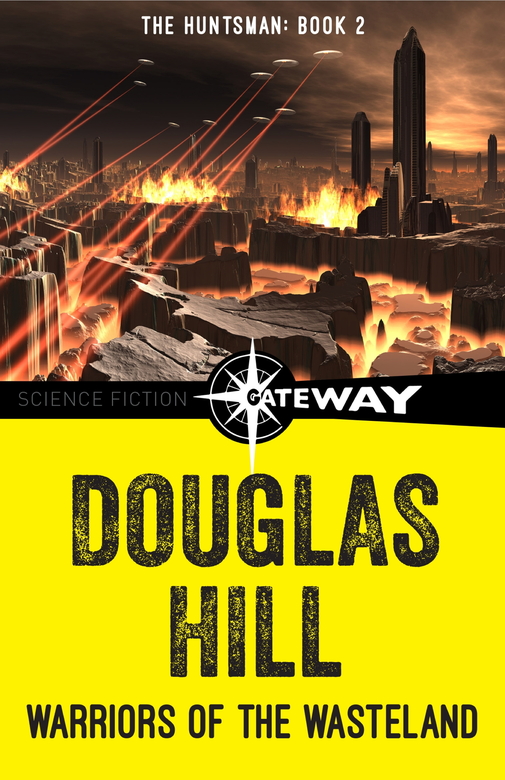 Finn Ferral travels through the wilderness with his contingent of rebels, ever aware of the Slavers' spywings. But his capture takes him by surprise. He is taken to the Alien Citadel, where his huntsman powers are worthless and where no human stands a chance of survival.

THE SMALL BATWINGED creature drifted through the empty sky, its bulging eyes tirelessly scanning the land below. Around it, on every side, jagged mountain peaks thrust up like gigantic broken teeth, with snow still glistening on some of them though it was late summer. Directly below the flying creature, between two spiky crests, lay a broad sweep of uplands, rising in an easy slope, richly covered in evergreens and scrub brush. As the creature swooped lower, to peer more closely into the shadows among the greenery, a rust-feathered hawk flung itself up from a treetop, as if to challenge the intruder. But then the hawk veered suddenly away, plunging back into cover even more swiftly than it had risen.

The hawk had sensed that the batwinged creature was not truly alive. Though it was partly flesh and blood, of a kind, its eyes were made of a clear, hard substance like transparent metal, and within the small dark body were other delicate mechanisms of metal. Those mechanisms transmitted, over astonishing distances, images of whatever the creature was seeing – images that appeared on large, oddly-coloured screens, surrounded by complex and strangely-shaped controls.

And the eyes that studied those screens, the hands that touched the controls to guide the creature’s flight, were not human.

But back on the forested uplands it was a very human figure that stepped out of a thicket, after the flying creature had vanished into the distance. It was a young man, no more than twenty, compactly muscled, who wore a sleeveless jerkin, trousers and low boots all made from animal hide. A heavy knife hung at one hip, a belt-pouch at the other; a strip of leather that was a sling was wrapped round his left wrist. He stood statue-still, sniffing the light breeze that ruffled his straw-coloured hair, his clear grey eyes warily surveying the sky.

The young man’s name was Finn Ferral. Once he had lived carefree and contented, as the huntsman for a tiny village huddled deep in an eastern forest. But that village was now many months and many hundreds of kilometres behind him. From their home in the village Finn’s family had been forcibly taken, carried off into terror and torment. And since then Finn had crossed more than half a continent, in a relentless, hazardous pursuit that few other humans in the world – as the world was – would have dared to begin.

Satisfied that the sky held no further danger, Finn turned back into the thicket. Though the brush was dense and dry, not a twig crackled, not a leaf rustled, as he wove his way among the branches. It was an effortless silence, almost instinctive, as if Finn was as much a wild animal as he was a human being. And the other figure, waiting for him in the depths of the thicket, seemed even more like a beast than a man.

He was no taller than Finn, but awesomely broader, a vast bulk of muscle. He wore only ragged trousers made of coarse cloth, and sturdy leather boots – but all of his massive upper body was covered in a dense, tangled pelt of light-coloured hair. And above one huge shoulder jutted the hilt of a machete, its sheath strapped against the mounded hump of muscle on his upper back.

His name was Baer, and he was one of a race of beings who called themselves the Bloodkin. They were descended from humans, in a chillingly unnatural way, but were closer to beasts – the beasts of nightmare and horror story – in their brutal savagery. Except for Baer. Far more of true humanity had been born in him: intelligence, compassion, humour. It was the human heart within Baer’s fearsome body that had led him, long before, to break away from his own bestial kind – and eventually to meet Finn Ferral, and to join him in his grim quest.

Baer stepped forward, aware as always of how much noise he made in the wilderness, compared to his young companion.

“That’s the second spywing this week,” he said, in a rumbling, melodious bass. “Wish I knew what they’re doin’, out here in the middle of nothin’.”

“Looking for us, maybe,” Finn said with a smile.

“Not funny,” Baer growled. “It could be. An’ the idea makes me nervous.”

“Where we’re goin’ is what’s different,” Baer rumbled. “Past these mountains we’ll be comin’ to the edge of the Wasteland. Which means big open stretches of nothin’. We’ll be as exposed as a black fox in a snowfield.”

“And past the Wasteland,” Finn replied firmly, “are more mountains. Which is where we’re heading. Even if every spywing in the west wants to come and watch.”

Then he grinned sheepishly as Finn burst out laughing.

“Folks in my village always used to say that,” Finn said. “They were a gloomy lot, too.” He jerked his head towards the west. “So let’s go see how much worse things get.”

He moved away through the brush, with Baer crashing noisily along behind him. “Just don’t forget,” Baer grumbled, “if we got spywings now, we maybe got somethin’ a lot nastier not far behind.”

Some days later, things had got worse. They were toiling through a region that made them long for the gentler slopes of the uplands. It was as if all the land in that part of the mountains had been squeezed and crumpled by some unimaginable force. The rocky terrain was split and broken – a series of ravines and steep-sided valleys, separated by barren tablelands. Yet there was still some plant life, mostly small twisted pine trees and thorny scrub. And among them, just as well adapted to that harsh world, many small animals found the means for survival. And where any wild creatures could live, so could Finn Ferral.

So he and Baer forged steadily on, through day after day of fierce exertion, of wind-swept ridges and rock-slabbed ravines, of high pale skies that remained empty of dark shapes with batwings.

Until a day came that brought to an end their time of uninterrupted travel.

The day was dwindling towards twilight, and as usual Finn had left Baer to make camp while he ranged out into the wilds. He was looking for water, to fill the leather water-bottle that Baer carried, and he was hunting, his sling ready in his hand, a sharp-edged stone from his belt-pouch set in its place.

But also, like any wild creature, he was prowling, making sure that no dangers lurked near the place where he would bed down for the night. So he was alert and watchful, listening to every fluttering leaf, sniffing the air like a wolf. And he drifted through the gathering shadows silent and unseen as a shadow himself.

The scent reached him first, and then the sound. A whiff of wood-smoke, followed by the almost inaudible murmur of voices. And if Finn had been a shadow before, now he was a ghost, vanishing into the brush as if the ground had swallowed him up.

Flat on his belly, he slid forward, towards the sounds. In moments he was close enough to peer cautiously past a low tangle of thorny branches.

Two Bloodkin. One of them lounging beside a small fire, the other standing upright, peering out into the gathering dusk. They were less bulky than Baer, but no less hairy. Both had long knives thrust into their belts, and their voices sounded harsh and angry. But then, Finn thought, Bloodkin always sounded angry about something.

“… so quit yer worryin’,” the one by the fire was saying. “If The Claw says they’re roun’ here, then they’re here. Them humans know these rocks. They’ll sniff ’em out.”

“Jus’ the same,” growled the one that was standing, “you heard what that kid c’n do. They c’d be sneakin’ past right now.”

The other snorted. “The kid’s one thing, the renegade’s another. We’d hear him. An’ so’ll them humans. They’ll have ’em ’fore it’s full dark. Why shouldn’t we get some rest?”

His voice trailed away – but the menacing words were echoing and re-echoing in Finn’s mind. He had no doubt that he was the “kid” they had spoken of, and Baer the “renegade”, the Bloodkin who had deserted his own kind. But who or what was The Claw? And who were the humans who were somehow on his and Baer’s trail? And, more important right then – where were they?

Finn felt a sick horror at the thought that humans might be working with the Bloodkin – serving the enemies of humanity, the Bloodkin’s inhuman masters. He wanted to get back to Baer with all speed. But he also did not want to leave two armed Bloodkin lurking out in the wilds.

Smoothly he rose to his feet, the sling whirling. His own movement was soundless, but the faint hum of the sling caused the standing Bloodkin to turn his head with a puzzled frown.

He was still wearing the frown when the stone struck him precisely on the temple, and when he slumped to the ground beside the fire.

The other Bloodkin began scrambling astonishedly to his feet, but did not complete the movement. A second stone thudded meatily just between the close-set eyes, and he sprawled back on to the ground where he had lain.

Finn approached warily, knife ready. But neither of them moved – and by the look of the crushed temple of the first one, he would never move again. Finn reached for their knives and flung them into the darkness. He knew that he should probably finish off the second one, but he was not able to kill in cold blood, not even a Bloodkin. At least when the creature awoke he would be unarmed, and dazed for some time.

And by then Finn intended that he and Baer would be far away from this unsettling place, where humans willingly did the bidding of Bloodkin.

He sped away, his night vision quickly returning as he left the firelight behind. Swiftly he retraced his steps, knowing that Baer too would be sitting by a small fire, unaware of the dangers gathering round him in the darkness …

But at the end of his desperate dash, he found that he was too late.

There was a fire, and Baer was beside it. But he was lying full lengt. . .