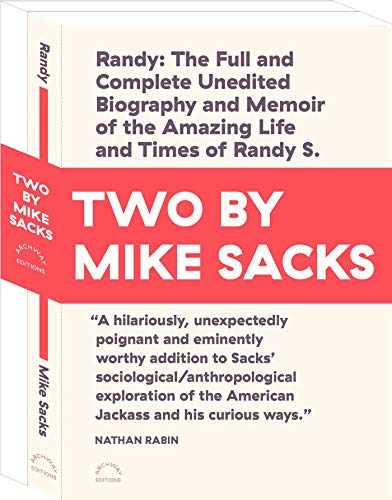 STINKER LETS LOOSE and RANDY - two ingenious metanarratives from Vanity Fair 's Mike Sacks that take comedy writing to surreal, uproarious new heights. “If you don’t know who Mike Sacks is, well, you should. His writing is funnier than just about anyone’s - hooray for Mike Sacks and everything he stands for.” -David Sedaris “He’s the best kind of comedy writer; a bona fide weirdo with virtually no interest in satisfying anything other than his own personal obsessions.” - Andy Richter STINKER LETS LOOSE “One of the Best Comedy Releases of the year.” - Splitsider “Top ten comedy release of the year!” - V ulture RANDY “Randy! is a hilariously, unexpectedly poignant and eminently worthy addition to Sacks’ sociological/anthropological exploration of the American Jackass and his curious ways. Audacious and inspired.” -Nathan Rabin “The year's best memoir is about a man who shot a porno in a Baskin-Robbins.” - Vice “ Randy does more to explain certain unexpected turns in this nation's political fate over the last couple of years than a bazillion think-pieces in the New York Times, Atlantic, New Yorker, MSNBC.” - John Colapinto ( The New Yorker) “As the book’s description alludes, Randy is an experiment in memoir, biography, and, well, sheer insanity.” - Robobutt