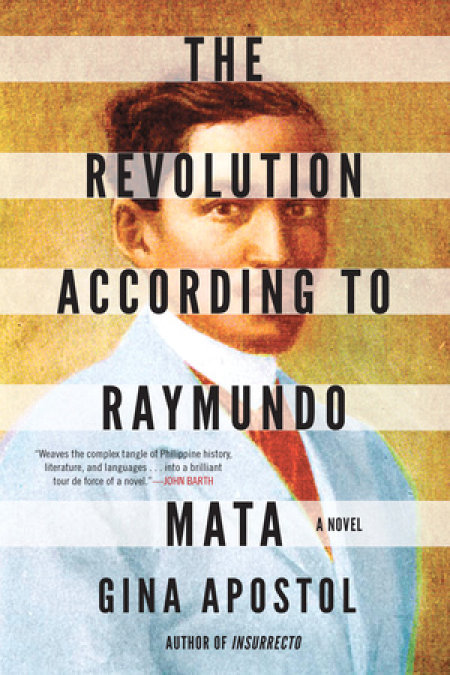 Revealing glimpses of the Philippine Revolution and the Filipino writer Jose Rizal emerge despite the worst efforts of feuding academics in Apostol’s hilariously erudite novel, which won the Philippine National Book Award.

Gina Apostol’s riotous second novel takes the form of a memoir by one Raymundo Mata, a half-blind bookworm and revolutionary, tracing his childhood, his education in Manila, his love affairs, and his discovery of writer and fellow revolutionary, Jose Rizal. Mata’s 19th-century story is complicated by present-day foreword(s), afterword(s), and footnotes from three fiercely quarrelsome and comic voices: a nationalist editor, a neo-Freudian psychoanalyst critic, and a translator, Mimi C. Magsalin.


In telling the contested and fragmentary story of Mata, Apostol finds new ways to depict the violence of the Spanish colonial era, and to reimagine the nation’s great writer, Jose Rizal, who was executed by the Spanish for his revolutionary activities, and is considered by many to be the father of Philippine independence.

The Revolution According to Raymundo Mata offers an intoxicating blend of fact and fiction, uncovering lost histories while building dazzling, anarchic modes of narrative.

I had not read General Mata’s journals when I spoke last year to a Mürkian psychoanalyst about the possibility of hysterical abreactions occurring on a national scale. This was during a lull at a conference at a floating restaurant on Manila Bay (or was it a fish market in Kowloon?—I can’t keep those junkets straight). There was a full moon, and we could see the marble columns of a colonial building nearby—a monstrous wreck that gave the shantytown around it a nasty glamor. The scholar was an unshaved blonde, the kind one often meets at academic conferences. She was expounding on independence movements as “macroscopic examples of aggressivity in the analysand” while she fondled some frangipani and picked through the pectorals of a Peking duck.
It struck me as she manhandled vertebrae and munched on the fronds, or vice versa, that academic blondes are aggressive bores.
To compare our revolution—the crux of our history—to some hysterical patient on a hypothetical couch was just icing on her slanderous cake.
But what did I have to offer her as evidence of the irreducible reality of our history? I knew no scholar, no text, not even a comic book that spoke of the Philippine War of Independence without disturbing solipsism or deeply divided angst. It’s a history that invites neurotics to speak up. It’s no great surprise that it ends up a vulgar patient in obscure neo-Freudian journals.
When the publisher Trina Trono described to me the Raymundo Mata manuscript—an excessive term, perhaps, for the mess she held up in her hands—I have to say I was skeptical. She held up an assortment of unpaginated notes and mismatched sheaves packed in a ratty biscuit tin and stuffed in a tattered medical bag, the edges of the papers curled up in permanent rust.
Then she thrust into my hands another stack, a neatly typed translation, with notes.
But even then.
I was not persuaded.
In my experience, the voice of the revolutionist is clouded by conflicting purposes.
He is vulnerable to the cynicism of a world that by the time he is done has sadly changed.
Our revolution failed.
Let’s face it.
We drove off a Spanish empire that had already given up the ghost then the Americans beat us to a pulp.
They had guns.
We wore slippers.
Who are we kidding?
Everyone acknowledges we got it worse than Vietnam, and the Battle of Manila Bay was way back in 1898.
We lost big time.
Why else do we have postcolonial conferences except to invite everyone to pick at our scabs?
Typically the revolutionist’s memoir emerges when the hero is beyond innocence—when the dream is dead. The gap between the irreducible (the mad flipflop fever, the trauma that cannot be spoken) and the speech that cradles it (unnaturally chronological, with suspicious clarity, and keloids of rancor garnished by footnotes) is only natural.
After all, as the blonde scholar said, and I quote with disgust: “the gap between language and reality is the bane of the human condition.”
Unquote.
However, in the histories of our revolution, this is magnified by the speaker’s own acceptance of his Fall. We’re left with the pathos of which he cannot speak, a rotten trick, if you ask me.
This is the tragic underlying note of all our histories. And so I felt this familiar troubling pain, below the diaphragm, near the liver, when I picked up the tin-can journals of Raymundo Mata, now conveniently stashed into this fine translated state.
My surprise was great as I read on. That the storyteller is, I must admit, flawed, maybe mad, does not diminish my faith in his story.
In fact, his madness amplifies its truth.

1 Oh the transgressions, you can call them that, on the life of his sad mother! The late lamented Leyteña, Maria Tarcela, or is it Marcela—whom Caviteños fail to acknowledge as the crux—the heart—the haunting ghost in young Raymundo’s story—as is the case of all Filipinos and their mothers, if you think about it, really. (Estrella Espejo, Quezon Institute and Sanatorium, Tacloban, Leyte)
2 Ah how I remember the luxury of lugaw as a kid, whenever I was sick in bed and stayed home from school—my mom’s specialty, flavored with cinnamon and molasses. Those are the moments I remember most about my robust nanay, maker of sinanlag and ladler of hipon (not that bland Tagalog bagoong!)—her own art, mix of shrimp and chili, with the occult taste of the sea and the earthy residue of baptismal fonts! Not this damned watery vileness—this cheap, mealy mash, this glum slime—that the nurses keep giving me! I have fragility of the nerves, not gum disease: can’t I get real, decent rice, at least! (Estrella Espejo, ditto)
3 Fragile nerves! You’re a spastic imbecile. I mean, a special ambassador. (Dr. Diwata Drake, Anaheim, California)
4 Really, Ms Translator? Who are you kidding—we had no Bartolome de las Casas in our sucesos, no eloquent curser of the conquistadores. We had Padre Damaso and Padre Salvi. Scalawags! Demonio! Spoilers of women and faith! Whose side are you on, Ms. Translator?? (Estrella Espejo, ditto)
5 Uuuh. Professor Estrella: Padre Damaso and Padre Salvi were fictional characters created by the hero-novelist Rizal. Though, true: Spanish priests were the devil. And that is the summa of Spanish history in the Philippines. (Trans. Note)
6 True! Father Damaso and Father Salvi are brain-children of Rizal, just like the country! Ah, how Rizal portrayed the truth. Just look at the demon friars’ spawn, the deathly pale mestizos all around us! Diyos ko ‘day! A ghostly people created in ungodly lust! Though I do like their cochinillo, t.b.h. (Estrella Espejo, ditto)
7 Uuuuh. Rizal was a mestizo, Professor Estrella? (Trans. Note)
8 Ah, there’s the rub. That the country arises from fiction, but this makes the demons no less true. Such is the fate of fantastic Nation. (Dr. Diwata Drake, Copenhagen, Denmark)
9 Filipinos used the term katsila, or, in the orthography of the time, kachila, to refer to both the Spanish person (Castilian/castellano) and the Spanish tongue. Even today, katsila types in Manila are simply called, without irony, coño. (Trans. Note)
10 Do all mothers have an unconditioned way with words to show their unconditional love, Mimi C.? Que se joda. A pungent phrase from my childhood. For my mom, may she rest in peace, that meant, I do not care, do as your conscience sees fit! And so I would learn not to disobey—except in my dreams. Later I learned the words meant something else. In this way my mother condemned me, nga birat ka, or silibanco pa man, buot dida, inday, in loving tones that made me buotan: that is, a beloved though bruised daughter. Ave Maria! (Estrella Espejo, ditto)
11 Ah, but is it not so that the cases of our affection are also matters of our split [mis]identifications, Professor Estrella? The above church-going anti-clerical Masons are specimens of humanity, are they not, just like our contemporary Filipinos: who are homophobic gay-lovers and matriarchal misogynists? As a wise proverb of an otherwise secular genius goes: That he is a trinity tells us even God is empty—a divided self [Claro Mürk, Proverbs III]. (Dr. Diwata Drake, Manila, Philippines)
12 A colonial dish of ox tongue, made by my mother with tons of peppercorn and olives. Cooks from other regions—and they know who they are—ruin it with sugar. Shame on them! (Estrella Espejo, ditto)
13 Yes, Estrella, one may call that lengua a suspect yet indivisible part of the Filipino stew simmering in the tongue—smothered with soy sauce and garlic, braised later in an American brew: English. (Dr. Diwata Drake, Manila, Philippines)