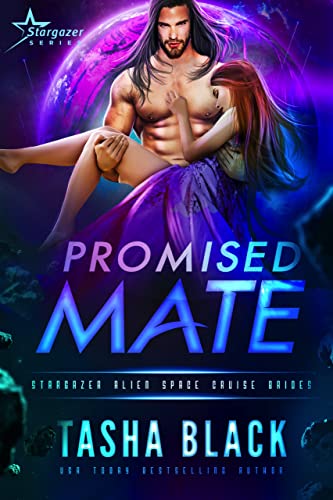 Hyacinth of the Seventh House is promised to a prince, but in love with her guardian. Magister Locke traveled to her homeland to teach her how to live in her fiancé’s world, but over time his commanding voice, subtle kindness and dark good looks have worked their way into her dreams. Now touching him is all she can think about. But her wishes won’t matter when it comes to her wedding day. If she doesn’t marry the prince, her planet will be doomed.

Viktor Locke of the Firmament traveled worlds to get to Hyacinth. His sacred duty is to instruct her in the ways of her fiancé’s people, in order to save her own. But, oh, the things he wants to teach her. If only he couldn’t read her emotions, then he wouldn’t know how desperately Hyacinth wants him too. The swift approach of her wedding date is both a torture and a relief.

When the engines fail on the craft carrying them to the wedding, the two take an escape pod and end up on an uncharted planet, far from anything they know. With comms down, danger everywhere, and no one to rely on but each other, Hyacinth and Viktor will have to drop the formalities that have defined their relationship for years.

Alone together, on a lush, unknown planet with wild animals and aggressive plant-life, the most dangerous thing they have to contend with now is their shared desire.

If you like strong women, hunky aliens, wild adventures, steamy sensual scenes, and happily-ever-afters, then you’ll love the world of Stargazer!

Author’s note:
Promised Mate was originally published as part of the collection, Claimed Among the Stars, which released in July, 2022. The anthology is no longer available.

Hyacinth of the Seventh House glanced around the ballroom.

Beautifully dressed Drathians were all around her, their fine suits and gowns nearly as colorful as the people themselves. Some wore jewels around their necks, on dark chains that matched their curved, black horns.

“May I have this dance,” a gentleman asked, bowing to her with a hungry look in his eyes.

She smiled at him, as she had been trained to do.

While he was presumably dazzled by her smile, she took in the blackened silver chain with onyx stones on his chest.

Silver meant he was of the noble class. But onyx meant he had pledged fealty to the Azyrim Party, the one that opposed her intended’s familial line.

“It is an honor,” she said politely. “But my lord awaits.”

“Another time, perhaps,” he said, moving back into the crowd.

“Stop,” her sister’s voice cried out.

Instantly, all movement in the room froze.

The dancing figures faded out partially, revealing Lilac in a scarlet gown, frowning at Hyacinth’s reaction to the hologram simulation.

“What is it, Lilac?” Hyacinth asked as patiently as she could.

Lilac blinked at her once, and ran a hand through the long, auburn mane that perfectly matched Hyacinth’s own long hair.

“What do you mean, you don’t know?” Hyacinth asked. “I spotted the jewels. I used the proper phrasing. I’m fine. I’m not going to ruin everything.”

“Our whole world is at risk,” Lilac said, her fierce facade revealing a rare touch of vulnerability. “You can’t just be fine. You have to be perfect.”

“I know that, Lilac,” Hyacinth said.

She felt a pinch of guilt in her chest. Her sister had sacrificed her own career to accompany her on this journey. Hyacinth should be grateful.

“It’s just that you do it better for him,” Lilac said.

Back on Pacifica, their home world, there were no men. Their leaders had founded the idyllic planet to be a woman’s paradise, with true equality, connection to the Great Mother, and peace at the forefront.

But now that the Armada had targeted their system, things had to change.

Pacifica needed an armed ally quickly, or it would be the first to fall to this new threat. And after that, the rest of the system wouldn’t be far behind.

There was no time for the slow waltz of interplanetary relations, which could take generations.

The fastest way to cement a treaty was with a wedding.

The Drathians had a considerable military, and their own unique need for such a marriage to happen quickly.

Prince Rowan of Drath was next in line for the throne. He was also rumored to be a wild playboy and not considered to be king material. The law stated that if he was wed to a woman not recognized as a full Drathian citizen, he would renounce his claim to the throne, and let his younger brother take his place as the next king.

But of course, he couldn’t marry just anyone. To avoid a complete scandal, the prince’s bride would still need to be of high enough birth to become a member of the royal family.

Which was precisely why the High Priestess of Pacifica had sent guards to take her from her home three years ago, when she was a normal, sixteen-year-old girl, studying the Great Mother’s texts, baking bread, and reading stories to her beloved little sisters.

In spite of the tears of her sisters and the pleas of her mother, Hyacinth had been brought to a temple at the top of Mount Serenity and given to a strange teacher brought in from The Firmament to be his ward.

It was an honor to serve the Great Mother by training to be a bride, or so she was told again and again. But she missed her family, and cried for them at night for the first few long months.

For three years now she had studied the etiquette and customs of Drath with Magister Locke. She memorized lists of its notable citizenry, and read endlessly about its warlike history. She mastered the language, including both the tone and accent to be used for any circumstance a princess might find herself in. All of these things she was supposed to do, and she did them with all her heart, for her people.

But for herself, she studied Magister Locke, wondering at the strangeness of his male form and his deep, frightening voice. She had never known a man before. He even smelled strange and foreign. At first, ...