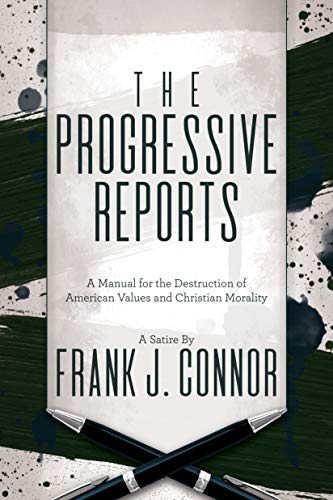 A satirical series of reports from a young progressive student to the DNC, outlining ways to undermine the conservative movement and create a progressive nation. The Progressive Reports is comprised of a series of nine commentaries written to the Democratic National Committee by David Gore, a fictitious progressive college student. These commentaries analyze social identity, morality, religion, science, rights, and the English language. David is angered by the activities of his university’s chapter of College Republicans and the way they are advancing the conservative cause in an area that has long been the acknowledged territory of the progressive movement. His goal is to use the lessons he has learned, as well as his observations of conservative students, to guide the country toward a more progressive future. He contrasts his own beliefs with those of a notable conservative student at his university, referred to only as “FJC.” An homage to C. S. Lewis’s timeless classic, The Progressive Reports provides an understanding of the tactics used by the American Left through the lens of their own—ultimately flawed—thought process in a form and style resembling The Screwtape Letters. It brings the reader face-to-face with the threats progressivism poses to our country.