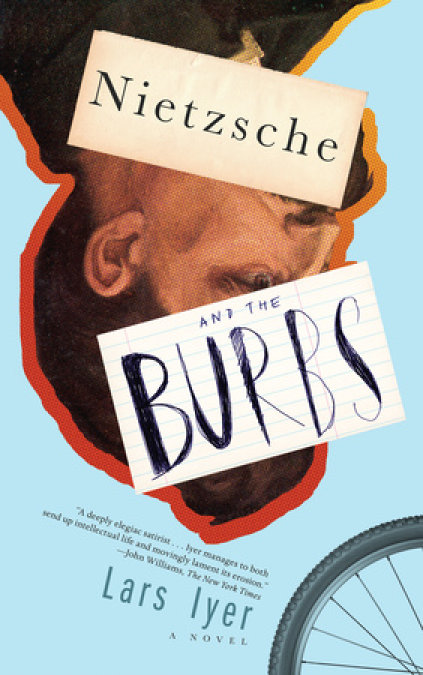 In a work of blistering dark hilarity, a young Nietzsche experiences life in a metal band & the tribulations of finals season in a modern secondary school

When a new student transfers in from a posh private school, he falls in with a group of like-minded suburban stoners, artists, and outcasts—too smart and creative for their own good. His classmates nickname their new friend Nietzsche (for his braininess and bleak outlook on life), and decide he must be the front man of their metal band, now christened Nietzsche and the Burbs.

With the abyss of graduation—not to mention their first gig—looming ahead, the group ramps up their experimentations with sex, drugs, and...nihilist philosophy. Are they as doomed as their intellectual heroes? And why does the end of youth feel like such a universal tragedy?

And as they ponder life's biggies, this sly, elegant, and often laugh-out-loud funny story of would-be rebels becomes something special: an absorbing and stirring reminder of a particular, exciting yet bittersweet moment in life...and a reminder that all adolescents are philosophers, and all philosophers are adolescents at heart.

Into assembly. The new boy, already picked off by the sixth-form pariah.
Oh, God—look at Bombproof, Art says. All positive.
We hope the new boy doesn’t judge us all by Bombproof.
Should we mount a rescue operation? But the new boy has already excused himself to Bombproof. He’s gone to the bathroom.
A cunning ruse, we agree. The bathroom rse.

Assembly. The whole school, sitting in rows. The whole school community. The whole school family.
We take our seats at the back of the hall.
Art, coughing. Merv, coughing slightly louder. Me, coughing louder still. Paula, coughing extremely loudly. Titters. Paula, excusing herself loudest of all.
The head of sixth form, glaring at us from beneath his domed forehead. Quiet, Upper Sixth! You’re supposed to be setting an example!
The Lord’s Prayer. Our daily act of worship. The whole school, heads down, mumbling the words. The new boy, head unbowed, staring straight ahead.

Economics.
The Old Mole, with graphs. The rise of stocks. The fall of government bonds. The continuing inflation of the housing bubble.
The Old Mole, asking what the graphs might mean.
Um, Bombproof says.
Ah, Dingus says. Then, inspired: It means that things are going well! Then, no longer inspired: Doesn’t it?
Diamanda, twiddling her pen. Putzie, shrugging. Quinn, vacant. Calypso, glowing prettily, but also vacant.
The Old Mole, impatient. Is she going to rant on again about overprivileged pseuds? About none us having ever seen real poverty?
Global economic collapse, miss, Paula says.
The Old Mole, looking up from her despair.
Hyperinflation, then a new Weimar, possibly a new Hitler, miss, Art says.
Stagflation, then another world war, to boost production, leading to mutually assured destruction, miss, I say.
Financial despotism, following the fusion of corporate power and political power, miss, Paula says. Fascism, in other words.
Resource wars, miss, Art says. Trade wars, miss. Real wars, miss . . .
The Old Mole, smiling grimly. And what is to be done?
Ums. Ahs.
Separate investment banks from retail banks? Art says.
Cryptocurrencies? Paula says.
Disintermediation? I say.
The new boy, hand raised.
The Old Mole, nodding.
The new boy: Nothing.
The Old Mole, no longer nodding: Nothing?!
The new boy: Let it all come down.
An entire economic system? the Old Mole says.
The new boy: Economy is the problem.
The economy itself? the Old Mole says.
The new boy: Economy devalues everything that matters.
The Old Mole, looking baffled: You want to get rid of the economy? What would we have in its place?
The new boy: Life.
Without goods and services? the Old Mole says. How would you meet your basic needs?
The new boy, leaning forward. My basic need is not to be dead. It’s not to be carrying a corpse on my back.
The Old Mole, not knowing what to do. Is the new boy a nutter?
The new boy, sitting back in his chair. Silence.
Wow! Art says, sotto voce.
So the new boy’s an apocalypticist. Just like us.

Lunch. The sixth-form common room. The new boy, carrying a tray from the canteen. We call him over to sit with us. Bombproof, slumped against the opposite wall, disappointed.
The end of the world, eh? Paula says.
Exactly how is the world going to end? Art says.
I think the world’s already ended, I say. This is the afterlife.
Some fucking afterlife, Art says.
I think this is the before life, Paula says. I think we’ve never actually lived.
We contemplate the new boy’s tray. Chips. Coleslaw. Baked beans.
Don’t feel you have to eat the school dinners, Paula says. The canteen’s disgusting.
And it’s full of lower-school pupils, Art says. Always avoid ­lower-school pupils.
We spent years avoiding the lower-school pupils. And we were in the lower school, I say.
The new boy excuses himself. He wants to return his tray. And he needs the bathroom.

Boredom. All the old common room faces. Bitch Tits . . . Schlong Boy . . . Hand Job and the gang . . . And The Sirens, of course, sitting together, exotics, transferred from private school at the beginning of the sixth form.
The Sirens haven’t played their hand yet, have they? Art asks.
They’ll never play their hand, I say. They’re girls of mystery.
You’d think they’re dykes, but they’re not, Paula says.
Paula wants to have the edgy lez monopoly, Art says.
Snippy snippy, Paula says.
Well, they’re definitely not gay, I say.
Chandra still has his thing for The Sirens, Merv says. Or for one of them, anyway.
I do not! I say.

The common room.
The lowest-common-denominator room, Paula says.
The common soul-death room, I say.
Surveying the landscape. The beasts—the last beasts, the last of their kind, their fellows having left the sixth form. These are the academic beasts, the beasts with some brain to go with their brawn, and their hangers-on. There’s Bombproof, the beasts’ chew-toy. There’s Calypso, as beautiful as her namesake, sitting on Dingus’s knee.
But the beasts are in decline, now might is no longer de rigueur. The beasts no longer rule the school, not since the trendies discovered irony . . .
And there they are: the trendies. Gathered round the centre table. So knowing. So louche. So seen-it-all-before. The spoilt kids. The clique of cliques. Mean boys and mean girls, looking to fill everybody with fear . . .
But even irony has its limits. Even mean kids meet their match.
There’s a new ascendancy—the meteoric rise of everyone else. The grey masses. The drudges. The duh-rudges. Too lazy for fear. Too distractible for irony . . .
So many of them! Always snacking and checking their phones. Always at their troughs. Always chowing down. Consuming. And so cosy! So bedded-in, with their novelty slippers and their massive vats of tea. So satisfied, yet so insatiable. So inert, yet growing fatter by the day. You can basically watch them expand. They’re like bamboo in the tropics, only not so vertical.
The drudges will survive us all—there’s no doubt of that. The drudges are here for the duration . . .
It’s a grim scene, I say.
It makes me want to put out my eyes, Paula says.
No wonder we don’t have anyone to hang out with, Merv says.
We have us to hang out with, Art says.
All we have in common is that we have nothing in common with anyone else, I say.
Or each other, Merv says.
We have our band! Art says.
The band’s dead, Paula says.

Home time.
The bike sheds. Unlocking our bikes.
Pigeons, flying after one another.
That one’s trying to fuck that one, Merv says. He’s, like, forcing himself on her.
Maybe she likes it, I say.
She’s flying away, Paula says. Or trying to.
Look at the way he’s strutting, Art says. Just like you, Chandra.
How do you know it’s a he? Paula says. Could be a dyke. Could be all dyke pigeons around here.
Nature’s disgusting, Art says. Animals are disgusting. I hate the way they always remind us of us. The way they just live—it’s indecent. All their instincts . . .
We have instincts, Paula says.
I refuse to have instincts, Art says.
The need to breed, Art—everything fucks, I say.
Is that what we’re like? Is that what love is? Art says.
Maybe machine intelligence will be better, Merv says. I mean, machines don’t fuck, do they? They can just build new machines.
Roll on full automation, Art says.

Wheeling through the crowds.
You know who the new boy looks like? Paula says. I’ve been thinking about it all day. Nietzsche.
Who? Merv asks.
Friedrich Nietzsche—the philosopher, Paula says. Don’t tell me you haven’t heard of Nietzsche.
Merv, investigating on his phone. Showing us a photo. The new boy doesn’t look anything like him!
You have to look beyond the moustache, Paula says.
How? Merv says. All I can see is moustache.