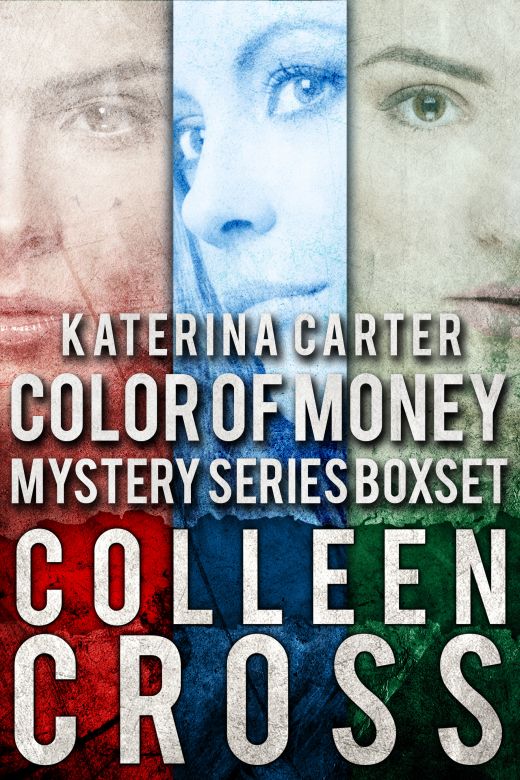 mysteries include wine, roses and a deadly romantic Christmas in the mountains!Red HandedWhen forensic accountant and fraud investigator Katerina Carter and journalist boyfriend Jace Burton accept an impromptu party invitation, crime is the last thing on their minds. Then a winning wine investment leaves a sour taste in Kat’s mouth and she unravels the clues to a million-dollar wine fraud, all before dinner!Blue MoonKat and boyfriend Jace’s plans for a fancy dinner go awry when she discovers that her elderly neighbor Fiona has taken an ex-con into her home as a boarder. Fiona’s volunteer gardening program at the local prison has changed lives, but extending her generosity further just might put her own life in jeopardy.Kat’s suspicion deepens when she learns of a recent life insurance policy. And accidental death pays double.GreenwashRocky Mountains, deadly avalanches…and a cold-blooded killer. He’s creeping closer…Private investigator Katerina Carter and her boyfriend enjoy a wintry weekend getaway just before Christmas at a luxury mountaintop lodge. While he writes the biography of a billionaire environmentalist, she explores the snowy wilderness. When two environmentalists die under mysterious circumstances, they uncover an even deadlier disaster. The mountains take no prisoners.Neither does the killer.If you like intriguing mystery thrillers liberally spiked with spine-tingling suspense, you’ll love Greenwash, a heart-stopping adventure!Forensic accountant Katerina Carter and boyfriend Jace Burton embark on a weekend getaway at a luxury mountaintop lodge just before Christmas. While he writes the biography of a billionaire environmentalist, she explores the snowy wilderness.Then two local protestors die under mysterious circumstances, and Kat and Jace race against time to save themselves from an even deadlier disaster.

Some days—correction—most days—Katerina Carter questioned the wisdom of buying the old Victorian house. She and Jace had bought it, sight unseen, at the city tax sale. It had seemed too good a deal to pass up, an entire Victorian house in exchange for payment of three years’ worth of unpaid taxes. But any savings had been more than eaten up in repair bills. Not to mention sweat equity.

She’d taken a rare day off work to focus on some much-needed home improvements. Fraud investigation tended to be slow in late August and she was between cases anyways. It was debatable which was harder: catching criminals or sanding away decades of paint layers on a neglected old house.

Kat laid down her paintbrush and smiled as she surveyed her work. The veranda looked stunning, the white paint gleaming in the bright afternoon light. While there were more pressing tasks around the house, they were largely invisible, like plumbing and electrical work. Doing the painting herself meant less money dropped into the insatiable money pit. She also wanted to finish before the onslaught of Vancouver’s autumn rains.

He flashed a smile that made her forget he’d been gone almost two hours.

Kat blew him a kiss and sat down in a creaky Adirondack chair, wondering why it had taken all summer to get around to painting the railing.

Of course she knew the reason. She had been preoccupied with the endless repairs and related casualties, most recently the burst pipe that had morphed into a complete re-plumb. Not to mention the warped fir floors resulting from the leak.

“Did you get the paint?”

Jace tapped his forehead. “I knew I forgot something.”

“But that’s what you went for. Only one item on the list.” Jace’s singular focus was a boon as a journalist chasing a story, but less productive when it came to other things.

“Sorry. I ran into Kirk Evans at the hardware store and lost all track of time. But I got something else.” Jace pulled his arm out from behind his back. “This.”

Kat leaned forward to read the small print on the bottle. “A bottle of red wine? Uh-oh, Jace. Drinking and painting never works out for us.”

He laughed. “That’s not what I was thinking. Besides, this isn’t just any old bottle of wine. It’s Screaming Eagle Cabernet Sauvignon.”

“Eagle. Kirk’s got cases of this stuff. You can’t buy it anywhere. He’s a wine investor now.”

“That’s a switch from unemployed journalist,” she said. “Don’t wine investors need money for start-up capital? He’s been out of work for quite a while now.” Kirk had worked with Jace at The Sentinel until he was caught up in the downsizing last year.

“We didn’t get into details, but somehow he’s making it work. This baby’s worth thousands. At least that’s what it sells for. Kirk buys it for about five hundred bucks a bottle.”

“And Kirk just gave it to you? What’s the catch?”

“No catch, just showing his appreciation for me helping him out last year.” Jace held out the bottle for her inspection. “Anyways, I thought we’d save it for a celebration. Once we finish with the plumbing and stuff.”

“Are you crazy? We can’t drink something that expensive.” Kat sucked in her breath as the bottle slipped in Jace’s hand. She certainly didn’t want to feel indebted to Kirk Evans. “Put it down before you drop it. We’ve got to give it back.”

Jace handed her the bottle instead. It looked like an ordinary bottle of Cabernet Sauvignon, except for the vintage year. Nineteen ninety-seven had to be expensive, even if the small monochrome label made it appear more ordinary than most. She studied the label’s flying eagle motif, wondering what made it so special.

She stood to return the bottle to Jace and almost tripped.

“Yikes!” Jace’s mouth dropped open as he lunged forward. “I got it.”

He grabbed the bottle from her hand and placed it on the table. “This stuff goes for over two grand at auction. People would give up their firstborn for a case.”

“We can’t keep it, Jace. We certainly can’t drink it.” Odd that Kirk would just happen to carry an expensive bottle of wine with him on a trip to the hardware store. But then Kirk was a bit of a braggart. Kat wouldn’t be surprised if he carried around a bottle as some sort of success trophy.

“I tried giving it back but he refused to take it. He wanted me to have it since he’s making such a killing. Said I could sell it if I want, he wouldn’t care either way.”

“That was nice of him.” Kirk wasn’t known for favors, unless he got something in return. “Since when is he so generous? I thought he was broke since his severance pay ran out.”

“He said the layoff was a blessing in disguise. Apparently wine investing is quite lucrative. He buys from the wineries, then resells it at auction. He has some kind of connection, I guess. I had no idea people even did that sort of thing.”  Jace sat down opposite Kat in the matching Adirondack chair. “Kirk says he’s a millionaire now. He was at the hardware store looking at materials for a wine cellar in his new house.”

“He told me he’s gone from broke to millionaire, just like that.” Jace snapped his fingers. “Less than a year. Wouldn’t it be amazing if we could do the same?”

Kirk was notoriously cheap. That was probably why he was building the wine cellar himself. But it hardly made sense to give bottles away, even to Jace. “There must be some angle, something he’s not telling you.”

“Doesn’t seem to be. He just has good connections. Oh, and he invited us to his housewarming dinner party tonight.”

Kat was surprised Kirk would risk money up front to buy the wine, let alone resell it.

“At least that way we could return the wine,” she said. She was curious about Kirk’s sudden change of fortune. “And investigate this wine investing further.”

It sounded too good to be true, and Kat intended to find out more.