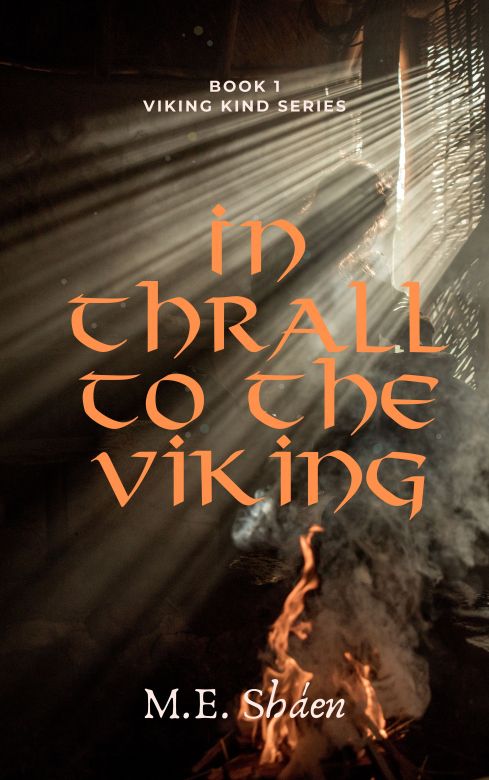 MEShaen
Follow
Elen is captured by Halfdan, a Viking warrior, and made his slave. Will she accept her fate or fight?
Genres: Historical Romance
Buy now
Available in:
Keywords: historical fictionhistorical romance vikingscandinavian fiction
Share

Myths, folklore, and legends have always fascinated me. In Thrall to the Viking is a fictional account of actual brothers, Halfdan and Eowils, who were kings in Northumbria in the late 800s and early 900s. Both, as well as a 3rd king named Ingwaer, eventually met their fate in the battle of Tettenhall.

I love a good enemies-to-lovers story with a strong heroine, so I hope you enjoy this story of Halfdan and Elen.

“The first hint my life was over came with the scream of the abbot and the ring of the old, iron bells. We skittered in all directions at the panic in the abbot's voice.

I raced from the garden with novice Mathilda on my heels. The abbot yelled for all the priests to go with him into the low building that housed the altar and the monastery treasures.

Confusion flooded my mind as I caught sight of dragon heads that loomed over the wall. Were we being attacked by dragons? I stopped and Mathilda almost ran into me.

"Come on, Nerys Elen! We've got to find safety!" She tugged my arm as she practically shrieked the words at me.

"What are we getting safety from? What's happening?"

As if the gods themselves strove to answer my question, a group of men appeared around a corner.

Mathilda sprinted away, only to be caught up by one of the men, and tossed over his shoulder.

I turned to flee and found my way blocked with yet more men who flooded the courtyard now. They all carried weapons and seemed to be cutting down anyone they came across.

I turned in another direction and blood splattered across my face as one of the brothers was all but sliced in half.

I dropped to my knees and began to crawl toward the gates. I hoped no one would see me in all the confusion.

I managed to slip past legs covered in leather and furs and saw a break between the men up ahead. I would make it out of the courtyard!

Then the ground fell away as I was lifted bodily by yet another man that I had not seen.

"Put me down!" I kicked at him and tried to yank at his long hair.

He smacked me in the mouth before he tossed me across his shoulder as I had seen done with Mathilda.

I struggled to free myself and this time he smacked me across the backside. ”

Excerpt From: M.E. Sháen. “In thrall to the Viking"