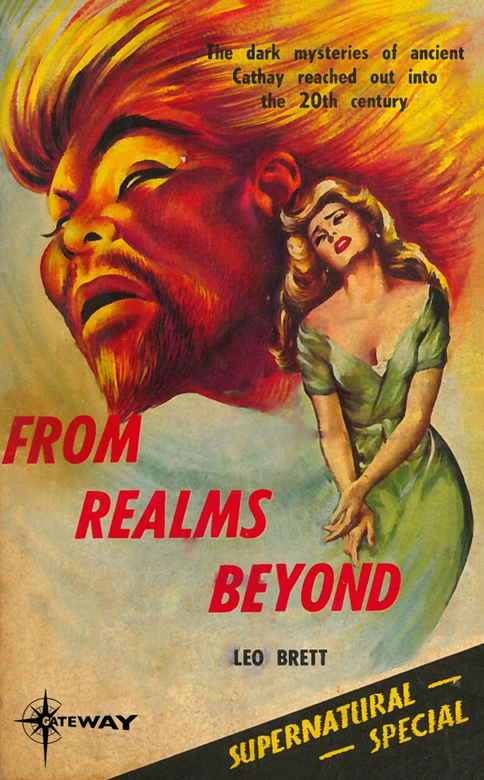 Nadia was a girl who had everything except real happiness. She was tired of trying to buy it, and she had just about matured to the point where she knew that nothing was to be gained by deliberately hunting happiness.

She saw the strange Asian in a Paris street market. His inscrutable features were dominated by a pair of mysterious eyes. He was incredible old.

Without knowing why, Nadia purchased a curiously carved wooden casket. The casket contained an oriental miniature, a scroll of curious characters and a phial of glowing blue elixir.

Nadia consulted a number of experts about these strange objects, but not until a psychometric boy handled them did she begin to guess at the terrible truth. She was trapped in a vortex of evil power and 20th-century science seemed unable to save her...

Mark of the Beast

Out of the Night

The Day the World Died

The Eye of Karnak

The Man From Beyond

The Man Who Conquered Time

The Return of Zeus

The Girl from Tomorrow

The World That Never Was

World of the Future

Face in the Night

March of the Robots

They Never Come Back

Cyclops in the Sky

Dawn of the Mutants

The Face of X

The Man Who Came Back

Beyond the Barrier of Space (AKA Formula 29X)

Legion of the Lost

The Face of Fear

World of the Gods

Alien from the Stars

Out of the Darkness

NADIA SINCLAIR was one of the most attractive girls in a boulevard which was as full of attractive girls as an Easter garden is full of daffodils. The Parisian sunshine reflected on hair that threw back a rich auburn fullness; it shone and sparkled in eyes like emeralds. Nadia Sinclair was all sparkle. She moved down the boulevard in a leisurely fashion. A woman with a hat the size of a dustbin lid, and a poodle the size of a cat, minced past on the other pavement. Nadia waved and the monstrosity beneath the dustbin lid hat waved back.

“Nadia, darling, how lovely to see you!” Dustbin-lid made its way across the boulevard, passing between the traffic like a mushroom floating downstream between pebbles.

“What are you doing, darling?” gushed the Mushroom, as it reached the sanctuary of the far pavement.

“How terribly gay! How absolutely wonderful!” gushed the mouth beneath the dome.

“Truffles doesn’t like people to tickle his nose!” gushed the mushroom.

“It’s a dear little thing,” answered Nadia, and carefully contrived to catch her toe against Truffles foot. Truffles yelped. Nadia smirked, as though to say, ‘that’ll teach you to snap at my fingers.’

“What have you been buying, darling?” asked Mushroom Hat.

“Positively heaps and heaps of things,” replied Nadia. “I couldn’t begin to tell you, darling.”

“Mmmmm,” affirmed Nadia, “ever so exciting.”

They walked together down the boulevard, pointing to things in shop windows, chattering girlishly about fashion and similar trivialities. In the clear, blue morning sky three fleecy white clouds, like the lonely harbingers of a distant storm, drifted like the eyes of some dry, opticated god, staring down balefully upon a creation which had not come up to his expectations….

“Oh dear,” sighed Nadia, “I get so tired of the boulevard.”

“So do I, darling,” gushed Truffles’ owner.

“Shall we try——” Nadia paused and whispered the name of a street market.

“Daddy doesn’t let me go down there,” said Nadia, “so of course I go whenever I can!”

They called a cab. It was a big Renault, bearing a white door number and propelled by a smartly uniformed driver belonging to one of the big fleets. Even Paris taxi drivers change eventually. Gone were the pre-war Jehus, each of whom had been such a character, such an individualist, such a bargaining, arguing, exciting, miniature in his own right. But their spiritual descendants had not lost the old-time skill. The Renault was a magnificent car. It had to be to stand up to the kind of treatment which its Jehu gave it! In and out of the traffic the monster tore, while Nadia Sinclair, Truffles and his owner sat ensconced in the comfortable depths of the back seat. On three separate occasions the taxi driver appeared to be heading for a completely unavoidable head-on collision. Yet on each of the three occasions the unavoidable was somehow miraculously avoided. Nadia and Mushroom Hat had travelled sufficiently often in French taxicabs never to be in the least ruffled or perturbed by the brushes with death which seemed to be a moment by moment routine, insofar as the drivers were concerned.

Truffles, being Truffles, sat and looked with bright, round, poodle eyes through the back window. He skipped from the seat to the floor, the floor to the foot rest, from the foot rest back to the seat, from the left window to the right window, and then resumed his position on the seat, staring out of the back, for all the world like a mascot that has fallen off the bonnet, or like the figurehead of a ship that has fallen off and been thrown in the hold after some minor collision.

The car sped on until they reached the end of the narrow street market.

It was a riot of colour and bustle, and characters who Were more human than honest. There was originality about those people, the quality of life which is a refreshing change from the artificiality of the Smart Set, who perambulated idly along the boulevards. Whatever else they lacked, these people did not lack realism….

Nadia Sinclair and her ‘friend’ alighted, paid the cabby, gave him a generous tip and made their way along the narrow, twisting alleyway, threading their steps daintily between stalls and fellow shoppers. Nadia was thinking deep thoughts of her own as she moved along the street.

“You were miles away. What were you thinking about?”

“Things? Whatever do you mean by ‘things’?”

“I want something more out of life,” mused Nadia.

“Did you have too much to drink last night, darling?” asked Truffles’ owner. “It does give us funny heads sometimes….”

“I haven’t got a funny head,” said Nadia. “If I had,” she added, rather tartly, “it would go very nicely with your funny hat.”

“I think it’s absolutely damn silly!” asserted Nadia. She was roused. Her green eyes flashed. Her red hair swirled as she turned her head. Nadia had a very quick temper.

“I think I’ll go home,” sniffed Truffles’ owner, “and it was going to be such a lovely day.”

“I didn’t ask you to come,” reminded Nadia.

“I thought you wanted me to come! You waved to me on the boulevard.”

“I couldn’t very well pass you in the street, could I?”

Nadia felt that she was behaving like a silly schoolgirl. She was angry, really angry. Girls like her ‘friend’ with the mushroom hat and the poodle, and all that mushroom hats and poodles stood for, suddenly seemed so dry, so empty and so completely worthless. There didn’t seem to be any reality left anywhere—and she was looking for reality so desperately. Nadia felt deep down within herself that happiness and reality must lie very close together, and that if you could once find reality you would be well on the way to finding happiness. People like Truffles’ owner belonged to the opposite school of thought altogether, they were those who had decided long, long ago that they dare not face reality, and to whom life had become one long round of escapism and frills and folderols.

There are some of us who are not satisfied with a life of froth and bubble. There are some of us who insist on finding a stone foundation, the solid rock of reality upon which life is constructed, if it is to have any meaning. Nadia was only vaguely aware that her friend with the poodle and the enormous hat had gone. She watched them out of the corner of her eye as they walked back to the edge of the alleyway, back to the world of respectability, back to the world of poodles and immense hats, the world of fashions and cocktail parties, and fads and trends, and à la môdes and, for want of a better word, sheer, empty vanity.

Nadia suddenly saw the strange Asiatic. His inscrutable features were dominated by a pair o. . .