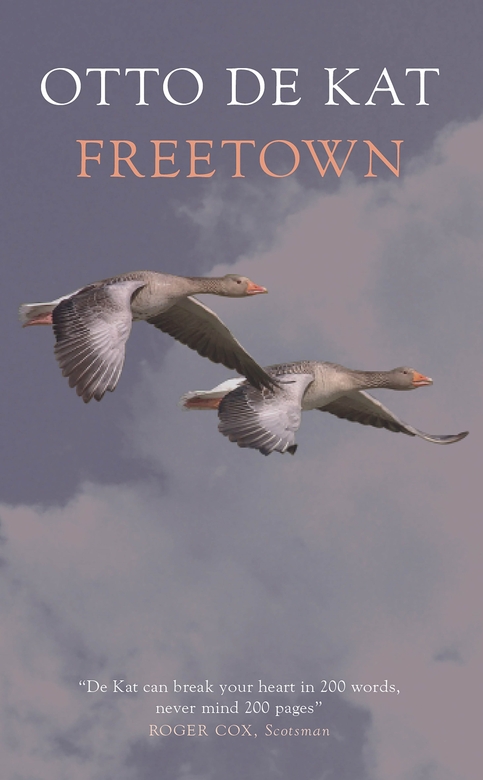 "He was a Fula. I say 'was', because I haven't seen him for a long time. I don't know if he's still alive or where he might be. He just disappeared."

Maria is independent, unconventional and unafraid. She is trying to find an explanation for the disappearance of Ishmael, a refugee from Sierra Leone who came to her door as a newspaper boy and stayed for seven years. He was like a son to her. Vincent is a psychologist. Once he and Maria had an all-encompassing relationship, but since their break-up he has been living in a kind of haze. One day, Maria asks for his help.

In the encounters that follow, Ishmael is pushed into the background by a rekindling of the old love between Vincent and Maria. The stories and memories that resurface come to replace the sadness at the loss of the boy. But despite the distraction of their new situation, Ishmael proves impossible to forget.

Otto de Kat is known for concise novels that are beautifully observed, subtle and precise, and Freetown is no exception.

Translated from the Dutch by Laura Watkinson

“I say ‘was’, because I haven’t seen him for a long time. I don’t know if he’s still alive or, if so, where he might be. He just disappeared.

“He was like a son to me. Son – that’s such a beautiful word, isn’t it? A word with longing in it. As soon as I say it, I can see him walking up our drive, with a helmet on his head. It was just before Christmas and it was raining. Yes, I’ll admit it sounds like the beginning of some old tearjerker.

“When I opened the door, there he was, a postcard in his hand, just waiting to be made redundant – hesitation from head to toe, no conviction at all: We Wish You a Merry Christmas and a Happy New Year. From Trouw newspaper and your delivery person.

“He handed it over saying a word. I couldn’t see him too well. It was still dark, and the visor of his helmet had dropped halfway over his eyes. The black jacket and the black trousers didn’t improve the situation. A Happy New Year – could there be any gloomier way to make that wish?

“I asked him if he wouldn’t mind taking off his helmet for a moment, to make it easier for me to talk to him. He did, and then I saw his face. Small and black, withdrawn, with eyes that did not look at me. Short curly hair.

“‘You’re always up and about early, aren’t you? When there’s hardly anyone else around,’ I said. Something like that. The conversation didn’t exactly flow, not that first time. He just nodded and gave me a hint of a smile. All that rain made it look more like crying. I gave him ten euros, and thanked him for delivering our newspaper.

“He stood there awkwardly holding the money, before stuffing it into his pocket, and then reached out both hands to shake mine. I told him to come back if he was ever out of work. And that maybe I could help him. I’ve often wondered why I said that.”

“Not a single day has gone by when I haven’t missed him, and it all started then. A dark-skinned boy, in a helmet, who grew up on the edge of the jungle, and somehow ended up in a backwater full of newspaper-reading affluence. Of course he didn’t look at me. What he could see all around him was so unfamiliar.

“The sound of his voice when I asked him his name.

“‘Ishmaël.’ He pronounced it in a slightly nasal tone, with the pitch of a different continent.

“‘You come back here, alright? If you ever need anything,’ I said to him. What a strange thing to say. Who invites a young man, a complete stranger, to come to their house? Was it impulsive? Prompted by some kind of embarrassment?

“And yet I meant what I said, without any doubt. Even though I’ll admit the words took me by surprise. But it was more than a mere impulse. I know for certain that what I had said expressed what I felt.

“Looking back, I thought it must have been to do with the time of year. Christmas, about to embark upon a Happy New Year. Everything under control, and every year better than the last.

“That was almost eight years ago now. Eight years, seven of which were happy ones. Well, not all the time, of course – that would be impossible. But yes, I’ll call them happy, because that’s how it seems, looking back. Those were the years with Ishmaël, and when I think of Ishmaël it’s as if someone switches on a light inside me.”

“It’s so kind of you, Vince, to agree to see me, and to listen to what I have to say. And what a good idea it was to go for a walk along the dyke. It’s much easier to talk here, so much freer. I was scared you’d want to see me in your office at home and I wouldn’t know what to say. But walking here with you, Vince, it helps me get my thoughts straight.

“Do you mind me telling you about Ishmaël? Yes, he is called Ishmaël. I feel like I’ve come to a dead end. I’m looking for a way through this, trying to understand what happened with him. Maybe you can make some sense of it, of what I want to tell you. You do specialise in other people’s stories, after all. I’m hoping that maybe you can explain why he left.”

“I live in a house that’s set some way back from the road. You wouldn’t know it. Maarten and I moved there about six years ago – you probably don’t even know that. Thirty kilometres along the river and you’re in a different area, with a new town where you go to do your shopping, and there’s almost nothing to remind you of where you used to live.

“You have to follow a gravel lane to get to the house, more grass than gravel, with trees and bushes either side. The garden’s pretty big, as my back kept telling me. I’ve stopped gardening now. I used to cope with the garden at our old place, but this one’s intimidating. It’s too much to handle.”

“Ishmaël closed his visor and walked slowly into the rain. He had leaned his moped against the fence. I saw him climb onto it. I’d walked some of the way with him, an umbrella over my head, and stood watching him go. A short curve and he disappeared from sight. I knew I was never going to see him again, and the thought made me a little sad.

“But then, with a longer curve, he reappeared, three months later. It was cold, the end of March, winter was over, but spring had not yet really begun. A dead time, when everything is waiting.

“I was working in the shed, stacking kindling wood, or something like that, when I saw him standing at the end of the drive. He didn’t move or dare to enter the garden without being invited. I waved at him to come on in, and then walked over there, since he still had not moved. Feeling a little awkward, I led him to the house. I could see how impressive it must look, the big garden, the rows of trees, the rhododendrons, hedges and shrubs, no sign of any neighbours. Not the kind of place where you would knock on the door unannounced.”

“I had told him that he should come back. He said to me in broken English that he had remembered my saying it. I don’t think there was a single word of Dutch in what he said back then. It makes you feel shy too, and so you struggle to find words. We tried to converse using nods and hand gestures. If you’d seen us from a distance, you’d have thought we were both deaf.

“The newspaper had sacked him, because he had overslept once. Which made me want to cancel the newspaper there and then.

“Sometimes I get up early. At six in the morning an entirely different world is stirring and rustling around you. I have to confess that I had often looked out for him, ever since he’d first come to our door. When I had seen an older man getting off his moped by our gate, I had wondered where Ishmaël was, if he was maybe sick, or had been given a different round.

“I asked Ishmaël where he lived. With an Afghan family in town, he said, but he had been asked to leave without any notice. The Afghans had simply deposited his suitcase in the corridor outside. He didn’t understand. He hadn’t done anything wrong. He’d even looked after the children sometimes, and he paid the rent in advance. And now he had nothing.

“He didn’t put it quite like that, of course, but I worked it out. He told me enough for me to understand. On other occasions too, I noticed the way he managed to get his meaning across with his half-swallowed, fragmented sentences, unintentionally challenging me to find my way into his language and to fill in what was missing. He nearly always succeeded in telling me a story I understood.

“The front door was open, and I asked him to please come in. Down the hallway, into my living room, my ordinary enough room which was filled with the collected past. Sixty years of stuff, plus a hundred years of family bits and pieces, paintings, a grandfather clock, photographs from before the war. You’d know all about that, Vince – I remember nearly everything from your room. We could open a little shop together. And call it ‘Life’s Luggage’.

“Ishmaël didn’t sit down. He stood there, dazed, or maybe just numb, that’s possible, in the middle of the room. I had no plan whatsoever. I’d more or less mechanically reeled him in and steered him inside. But what now?

“The silence was tangible.

“At one point, I imagined he was so quiet because he liked being with me, that he found it peaceful. Later I realised I’d been wrong. He once confided to me what was going through his head the first time he was in our house. He would have liked to disappear as quickly as possible. What did I want from him? He’d be better off calling a friend he could stay with. He would thank me for my kindness, but he had to go. And then his head was suddenly so muzzy he thought he was g. . .