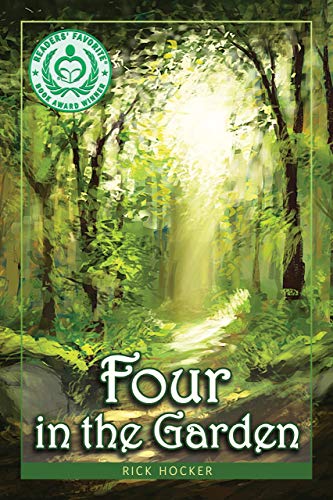 Rick Hocker
Follow
Imagine you were the only human made by Creator and He wanted a relationship with you.
Genres: Christian Classics & AllegoriesChristian FantasyReligious & Inspirational
Buy now
Available in:
Keywords: Christian FantasyChristian fictionfaith and Trustinspirational fictionspiritual fictionchristian classicchristian allegoryTrust
Share

"A must read for anyone on a spiritual journey."
​​​--Richard Rohr, OFM, Founder, Center for Action and Contemplation, Author of 30 books

What if you were the only human made by Creator and He wanted a relationship with you, but you found it difficult to relate to Him? This award-winning book challenges readers to trust in God in spite of our fears and misconceptions. A compelling, emotional, and thought-provoking allegory of one's relationship with God.

To aid contemplation and spiritual growth, Four in the Garden is divided into short thematic chapters and discussion questions are available at the back of the book and at rickhocker.com.

On the book's web site, rickhocker.com, download a free transcript of a speech by the author on the topic of trusting in God, the main theme of his book, Four in the Garden. 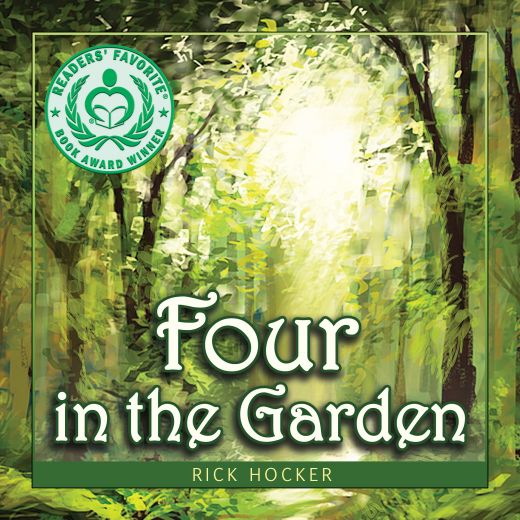 The warm sunlight touched my skin for the first time. With tender care for their precious cargo, the three Teachers laid my lifeless body on the soft grass in a forest meadow. Scattered clover stirred in the breeze that caused the nearby cypress trees to shiver. My mature body had firm limbs and shoulder-length hair. Creator had readied it to receive my soul.

The slender, human-like Teachers knelt around me and waited for me to awaken to life. Each Teacher possessed a pair of giant, feathered wings in addition to a pair of arms. Each wingtip connected to the nearest wingtip of the others by single hooked fingers, creating a circular enclosure around the four of us, a ring of feathers with me at its center. Their eyes twinkling, they gazed at me and smiled with loving adoration.

Creator had given the Teachers charge over me. He had appointed them to teach me about Him. They would soon discover that I was slow to learn and trust.

My first thoughts emerged like bubbles that surfaced from deep, secret waters, then popped, releasing their contents for me to ponder. My awareness focused on my self, alone. I explored the inner space I inhabited, a whole universe of being.

I gasped, sucking my first draft of air with greediness. Afterward, I felt the rhythmic rise and fall of my chest with each breath. Warmth penetrated the front of my body. Something soft and cool pressed my back. Soothing sighs whispered into my ears. Each sensation intrigued me and gave structure to my world.

When I opened my eyes, the overwhelming light caused me to squeeze them shut. Then I squinted and looked away from the brilliant light above me, allowing my eyes to adjust to the brightness. My breathing quickened as I beheld a dazzling display of colors, patterns, and movement.

I sat up to survey my surroundings, but I couldn’t distinguish distinct forms from the visual information inundating me. After practicing to focus, I could discern shapes, though I didn’t understand them. I couldn’t yet comprehend that I was sitting within a forest clearing, encircled by three kneeling creatures who I thought were nothing more than scenery.

Beneath me, a dense layer of green, flexible blades cushioned my body. I brushed my hand over their soft texture and watched the blades snap back into place. Driven by curiosity, I extended my hand to touch a large shape, not knowing I was touching one of the winged creatures. They had no gender, but I refer to them as male in this story.

The creature responded by placing his hand atop my head, startling me. Iridescent emerald feathers on his throat gleamed in the sunlight. The tips of his wings and his large eyes were also emerald green. His massive nose curved like a beak toward the top of his feather-capped head. The feathers of his wings and head were gray-brown, speckled with dark chevron-shaped flecks. His body had smooth skin the color of tawny sandstone.

In a melodious and cheerful voice, he said, “Blessed are you, formed by Creator’s wisdom and power, gifted with life by His abundant grace. You are Creator’s handiwork, made from love and for love. He rejoices at your birth and delights in your being. Because He cherishes you, you shall be called Cherished. My name is Manna. I express the words of Creator.”

The other two creatures swept past me to position themselves in front of Manna. With flapping sounds, they reconfigured their wings as they dropped into in a kneeling position facing me, all the while keeping their wings linked.

The creature on the left placed both hands on his chest and spread his massive wings. He had the same form as Manna, but with ruby eyes, throat, and wingtips. He was the largest of the three, with a broad chest. “My name is Ennoia. I fathom the mind of Creator,” he said with a commanding, orotund voice. “Manna isn’t the only one who speaks for Him. I speak when Creator discloses His innermost thoughts.” Ennoia contracted his wings and became silent.

The third creature smiled and gazed at me with expressive sapphire-blue eyes that matched his throat and wingtips. He had the smallest frame and a few feathers sticking out of place atop his head. “I’m Aable.” The sound of his voice was high and crisp. “I’m not a talker like those two,” he said, glancing at the other creatures. “I do the works of Creator. My specialty is works, not words.”

I lost track of myself as I watched this captivating activity play out before me. My ability to understand them amazed me. I listened, trying to grasp every word.

Manna shuffled forward and placed his hand on my leg. “Creator has given you the knowledge of language and the capacity for speech so you can understand us and communicate with us. Ask questions and speak freely. We will teach you everything you need to know. We are your servants.”

The three beings bowed as they draped their wings on the ground.

I interpreted this gesture to signify that I was the dominant being in this foursome. As such, I took initiative and spoke my first words.