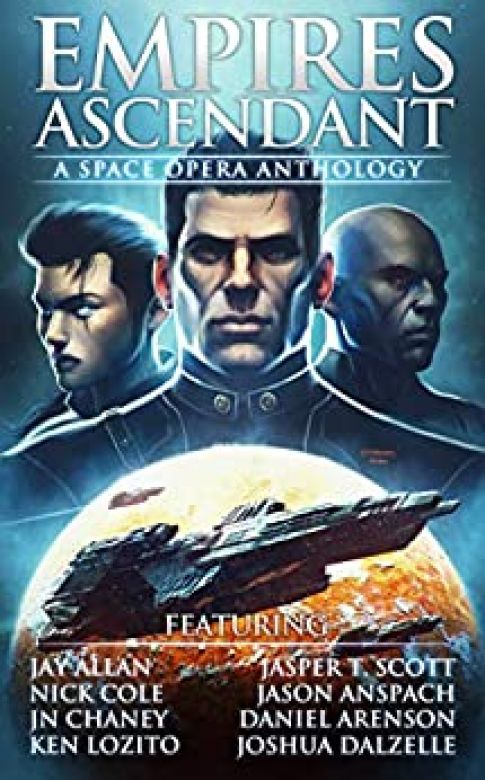 The rise of empire. The golden age of expansion, of exploration. Stories of new and vibrant civilizations growing, reaching out…and sometimes fighting desperately for the future.Empires Ascendant brings 6 masters of military science fiction and space opera together in one volume of all new, original material.Shadow of PurpleJay AllanOne honorable man.Altharic Vennalus is a general, and a loyal servant of the Republic. He has battled endlessly, fighting to preserve the Republic from the usurpers who would topple it. The civil wars that have raged for three decades are nearly at an end. But peace is an elusive dream, and pain and loss will drive Altharic to places he couldn’t have imagined. In the end, he will be faced with answering one burning question. What is the cost of his honor?The Thousand Colors of NightDaniel ArensonA strange signal comes from deep space. A folk song from hundreds of light-years away. A song where there should be only silence. One starship flies to investigate. It finds a mystery that will change humanity forever.Banshee’s Last ScreamJason Anspach and Nick ColeFrom the world of Galaxy's Edge: When a Dark Ops legionnaire is found dead under suspicious circumstances, his fellow operatives employ the notorious bounty hunter Tyrus Rechs to find those responsible and make them pay for their actions. But Rechs uncovers a sinister plot much bigger than a simple murder. Jason Anspach & Nick Cole deliver the first original Galaxy's Edge short story ever to appear in an anthology… Banshee’s Last Scream!The Ganymede ArbitrationJN ChaneyIn 2833, Arbiters Wojtek Dimek and Gabriel Anderson are sent to contain an escalating genocide on Ganymede. Jovian Alliance Prime Minister Frank Wallace directs a campaign of systematic murder on the frozen moon.The Arbiters board Wallace’s ship to take the Prime Minister into custody, only to find themselves at ground zero of a coup, and they must now fight to reach extraction against overwhelming military forces in an increasingly volatile situation.Demons at WarJN ChaneyA Republic war in paradise. A Marine faced with the ultimate decision.Sergeant Magnus pictured the beach covered with bikini-clad women working on their tans. Instead, it has been overrun by those who would see him dead.Outnumbered and surrounded, Magnus must find a way to keep his unit alive against an unrelenting enemy from the ocean. It's time to do what he does best.Rogue FactionsJoshua DalzelleAll 3 of the warring nations of humanity had finally agreed to meet and discuss an end to the slaughter that had gone on for centuries. Could this really be the end of a conflict that had taken millions of lives and left economies on the verge of collapse?As the 3 delegations meet on neutral ground to discuss the chance for peace, not everyone is happy that the war could be ending. Soon, multiple assault forces, smuggled into the conference in secret, engage each other. Who will dictate the future of humanity, those who want war without end, or those who want to forge all of humanity into a mighty empire?Acheron RisingKen LozitoLt. Commander Elias Browning's military career was over, or so he thought.When a secret research colony is discovered by a ruthless enemy, Elias must take command of a small battlegroup. Outclassed and outgunned, Elias must find a way to stop a superior enemy fleet from enslaving his people, but how can he succeed where every other star union in the galaxy has failed?InvasionJasper T. ScottChris Randall just got fired. On his way to break the bad news to his wife, an explosion rips through the night--followed by a dozen more. Scimitar Fighters are streaking down from space. Before Chris can wonder what starfighters are doing over San Bernardino, he sees the clouds light up with laser fire. That's when he sees it: a dark wall of shadows hovering over the valley and drifting toward LA.