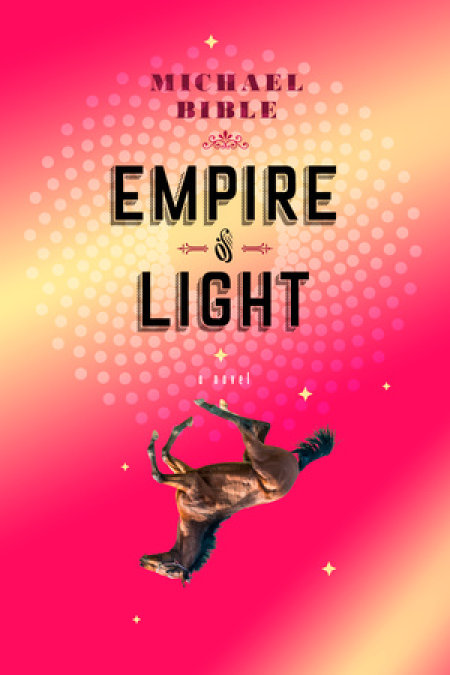 ”Denis Johnson seems to be the abiding spirit of the novel, which achieves the incendiary strangeness of his prose . . . Bible offers us a remarkable vision of adolescence as not just a time of extreme exposure but one of visionary longing.” — THE NEW YORK TIMES

After an adolescent prank leads to a stranger’s death, Alvis Maloney rambles westward. He lands in a small North Carolina town and falls in love—in love with his neighbor Molly, with a lonesome quarterback called Miles, with a whole community of enduring misfits and losers.

But at the same time, another life takes shape in Maloney’s dreamlike visions: a horse named Forever, a princess with hypochondria, and an electric city that’s always just out of reach. As these two promises of home fight for their hold on Maloney, the story careens toward disaster, and in the end Maloney must choose between love and redemption.

From the author Electric Literature called “one of the most interesting and exciting new novelists in years,” Michael Bible’s Empire of Light blooms with mystical imagination and a hopeful heart.

When I was twelve years old, I caused a stranger’s death. I was living in a foster home in the foothills of North Carolina. It was a snow day, no school. One of the other kids, this boy they called Bird, asked me to go sledding beside the cemetery. The whole town was covered in ice. The hill was a sheet of glass and we went faster than we’d ever gone before. It got dark but we didn’t feel like going inside yet, so we sat at the top of the hill and watched cars pass under the amber glow of the streetlight. It was Bird’s idea to throw snowballs and see if we could hit something.

Next car is mine, he said. Bet you a dollar I can hit it from here.

Bird packed up a snowball. A truck with big mud tires was passing under the streetlight. Bird lobbed it up high and it came down like a grenade and landed with a thud on the truck’s hood. The driver rolled down the window and gave us the finger. We laughed.

Next one’s yours, Bird said.

He packed a snowball and handed it to me. The next car was an old grey Ford. I wound up like a baseball pitcher and threw it as hard as I could. It smacked the windshield and the driver lost control. The Ford ran off the road and slammed into the streetlight. The horn was damaged on impact and moaned out into the night. Bird didn’t move but I ran to the car, slipping on the ice the whole way down. The driver was an elderly woman, she was pinned inside.

Call for help, I yelled to Bird, but he couldn’t hear me over the sound of the car horn.

What, he yelled back.

Call for help, I yelled again.

Steam came out of my mouth as if the words themselves hung there in the night. The driver’s side door was stuck so I ran around and opened the passenger side door. The woman was slumped over the wheel like she was sleeping. I crawled over but couldn’t get her out of the seat belt. There was a bouquet of azaleas in the backseat undisturbed among the glass and blood. The strange amber glow from the streetlight filled everything.

Can you hear me, I asked.

The woman let out a low sound, a word maybe. Was it an accusation? Had she seen me throw the snowball? I couldn’t hear anything over the sound of the horn. I looked through the cracked windshield and saw people beginning to come out of their houses. A few stood on their porches and watched. No one wanted to get involved. I tried again to get the woman free but she was stuck. There was nothing I could do but hold her hand.

You’re going to be OK, I said.

It seemed like forever but finally a fire truck arrived. It was bright and loud and strange, as if a spaceship had landed in the snow. I ran out to it.

She’s pinned inside, I said to the fireman.

Get the hell out of here, kid, he said.

A police car had pulled up too and the fireman put me in the backseat. Bird was already there, a policeman sat up front sipping coffee. We watched one fireman put up a blue camping tarp over the car to block it from view while the other firemen worked to pry her out. Finally someone cut the battery and the horn slowly died away, from a constant moan to a whimpering silence.

Tell me what you saw, the policeman said from the front seat.

She lost control on the ice, Bird said. Hit the streetlight.

Where were you standing, the policeman asked.

Up on that hill, Bird said.

What were you doing up there, the policeman asked.

There was a long pause. Bird looked at me.

Nothing, he said. We weren’t doing nothing.

The ambulance arrived. They worked under the blue tarp for a while. I knew the firemen had freed the woman from the car because the ambulance driver got the stretcher out.

Is she going to be OK, I asked the policeman.

He turned around. He was young for a police officer. Maybe in his twenties. He looked like he wanted to say something that he didn’t know how to say.

She’s going to be fine, he said. You did the right thing.

Behind him they loaded her into the back of the ambulance in a body bag. It was the first time I realized that people lied to protect you from the truth.

That was five years ago.

I never saw Bird again. Last I heard he got adopted in Florida. The foster program bounced me around to a half-dozen families and schools. I began to have discipline problems. Minor stuff. Cutting class. Smoking cigarettes. Then one night I got drunk on cheap wine and rode a stolen horse through a school dance. They were gonna send me away to juvie for that one. I wanted to see the wide-open country so I hitchhiked west. I saw the sun die pink over the Rio Grande, walked the streets of Hollywood penniless and was taken in by an aging starlet until she tired of me, and I lied about my age to become a dishwasher on a cross-country train. There were strange nights out there and I longed for a steady place to lay my head. I got busted smoking a joint behind a Waffle House in Tennessee and spent a night in lockup till they got my records straight. Judge gave me two choices: big-boy jail (his words) or back to foster care in North Carolina. I chose the latter.

I was sent to another nowhere town on the way to somewhere better. My neighbor was a wayward girl my age named Molly Everhart. We sat on her side porch in old white wicker chairs and watched big storms roll in. It’s what passed for entertainment in that little Carolina town. The rain fell in long blue curtains over the roof like we were trapped inside a waterfall. Molly’s hair was the color of wild honey, same as her eyes. She leaned back in the wicker chair and smacked her gum. The yard filled with puddles so deep the water splashed back skyward like it was raining in both directions. She wore a pink sweater and white jean shorts and when she stretched I noticed a tiny birthmark on her hip in the shape of a dagger.

Where did you come from, she asked.

A city, I said. An electric city.

I closed my eyes.

There was a city up ahead that pulsed and glowed. For me, life and death were learned by heart. There were canyons up ahead with walls painted like a child bride’s face. Princess Hypochondria was on a sheer cliff, the long train of her dress flowing out with her hair.

I’m dying, she said. I have every disease.