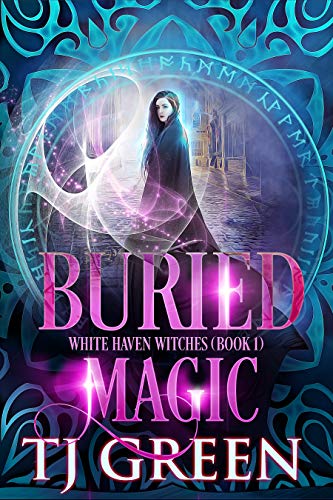 Avery, a witch who lives on the Cornish coast, finds her past holds more secrets than she ever imagined in this spellbinding mystery.

For years witches have lived in quirky White Haven, all with an age-old connection to the town’s magical roots, but Avery has been reluctant to join a coven, preferring to work alone.

However, when she inherits a rune covered box and an intriguing letter, Avery learns that their history is darker than she realised. And when the handsome Alex Bonneville tells her he’s been having ominous premonitions, they know that trouble’s coming.

They need to team up to uncover the truth.

Their investigations bring danger. Someone wants the past to remain buried, and they’re willing to unleash powerful magic to do it. 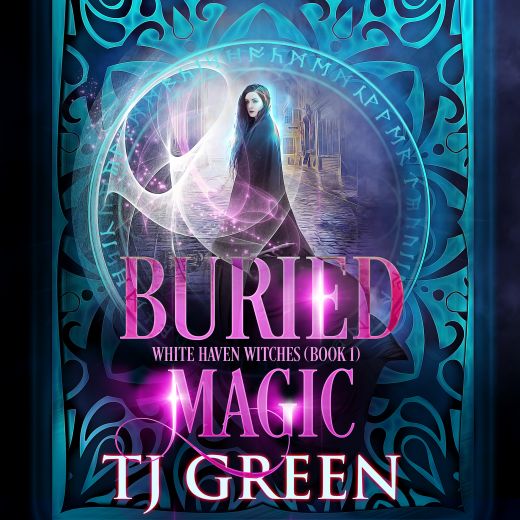 I love writing about witches and find witchcraft fascinating, and I have attempted to be as faithful as possible to witchcraft traditions - with of course fantasy elements!

Check out my blog post on the origins of this series: https://tjgreen.nz/witchesandthewitchtrials/

Avery always liked to read the tarot cards on a full moon, outside if the weather allowed, and today it did. It was mid-June and hot. The earth smelled rich, and the scent of lavender drifted towards her.

She sat at her garden table. The brick-paved patio area was flooded with silvery light and the garden beyond was full of plants, lost in the shadows despite the full moon. The only things visible were the white roses that nodded from the depths of the borders, and the gravel paths that snaked around them.

Earlier that day she had sensed a shift in the normal path of her life; a premonition that required further investigation. Out of long practice she sat calmly, shuffling the cards and then placing them out in the cross before her, turning them one by one. She shuddered. Change was coming, and with it, danger. The cards revealed it and she could feel it. And it would happen soon.

Avery leaned back, perplexed, and then jumped slightly as she heard the click of the gate. Alex, another witch. She recognised his scent and sound. Her worry over the reading was replaced by curiosity.

He stepped into view, his expression invisible with the moon behind him, casting her in shadow. He was tall, with broad shoulders and a lean, muscular build. It was like a wall had stepped between her and the moon.

“What a lovely greeting, Avery,” he said, his voice smooth. He pulled a chair out and sat opposite her, looking down at the cards. “So you sense it, too.”

“You know what.” He sounded impatient. “That something is coming. Don’t you think we should work together?”

He leaned back, shifting slightly so that the moon lit his face, showing his day-old stubble and his long dark hair that fell just below his shoulders. His brown eyes looked black in the light. “This is ridiculous. You have no reason to distrust me.”

She refused to be drawn. “I have no reason to trust you, either. You disappeared for years, and now you’re back. I have no idea who you even are anymore.”

“I’m the same witch I always was. People travel, you know. That’s life!”

Even now Alex could make her blood boil with his infuriating superiority. She wanted to throw something at him, like a lightning bolt. “Why are you here?”

They stared at each other across the table, Avery only able to see a glint of moonlight in his eyes, until he said with forced patience, “There are five witches now in White Haven, five of us who wield the old magic. We should meet. Pool our resources. I can’t believe you haven’t already.”

“We’ve had no need to form a coven, and I like working alone.” She inwardly chastised herself. Why did she have to sound so defensive? It was okay to work alone.

“I’ve been talking to Elspeth. She’d like to form one.”

Avery rolled her eyes. “Of course she would.”

“We’re all witches! What do we need to share?”

“Oh, let me see,” he said with a sigh. “El can work metal, brilliantly, metal and gems, in fact. Far better than any of us can. Have you seen what she’s been producing lately?”

“You should. And of particular use for us, she can weave magic into an Athame, and other useful objects we use in our rituals.”

“Not as good as she can,” he persisted. “And Briar is excellent at using herbs and healing. Better than all of us,” he said, cutting her off before she could protest. “Gil is particularly good at using water magic. And then there’s you.” He stopped and just looked at her, his expression unfathomable. He was making her uncomfortable.

“What about me?” She was annoyed with him for being so very logical, and she felt the wind stirring around her as her annoyance increased.

He laughed, the white of his teeth bright against his shadowed face. He looked around and the breeze made strands of his hair float around his face. “Am I making you cross? I’m sure you’re causing that wind.”

She frowned and cut it off, the wind dying instantly.

“Air. You manipulate it so easily. And new spells, your intuitiveness—those are your strengths.”

She was so unnerved at his knowledge of her that she responded with sarcasm. “And what about you, Alex? What can you bring?”

“My ability to scry, to prophesise, my astral abilities. And fire.” He glanced at the candle that sat on the side of the table, unlit, and it suddenly flared to life, the flame shooting a foot into the air before it settled down to a small, orange flame. The light illuminated his grin. “I burn hot, Avery. Nice on cold nights.”

“How lovely,” she said, trying to dispel the images that rushed into her head. She put the flame out as quickly as he had lit it, the smoke eddying between them.

He leaned forward. “I’m calling a meeting. The others should know that we’ve sensed something. We need to be on our guard. My place, tonight at ten.” He stood, once again blocking the moon briefly before he headed to the gate, his gait long. “By the way, your defences on the house need strengthening. See you later, Avery.”

Alex was 29, a year older than her, and they’d been to the same schools and shared the same powers, and yet he infuriated her. She watched him go, then looked up at the moon and wanted to scream, but the moon counselled silence, so she swept the cards up, shuffled, and dealt again.