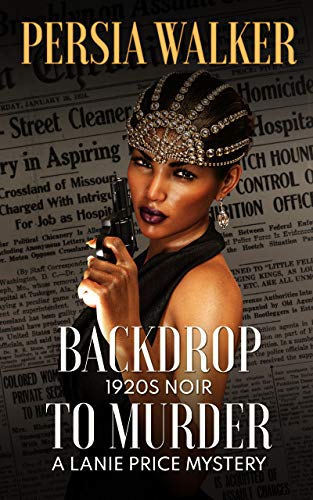 For 1920's society reporter Lanie Price, the photographer found shot through the eye in the back of his studio isn't just another story. It's personal.

On a dank night in September, Lanie is called to the scene of a grisly double murder. The victims: a popular photographer and a Cotton Club beauty. The suspect: the dead man's jealous wife. Found weeping over his body, her wails of grief and regret condemn her on the spot. The cops say the wife did it and an outraged community believes it. Will Lanie be able to stop an innocent woman from getting a date with the electric chair -- or is this innocent woman not so innocent after all?

Set against the backdrop of the Harlem Renaissance, Backdrop to Murder is the latest book in the Lanie Price mystery series. If you like suspense, then you'll love this 1920's noir mystery. Pick up Backdrop to Murder to discover this exciting series today.

You ever heard of the colored photographer Andrew King? Never did? Well, that’s a darn shame. But in a way, it would’ve surprised me if you had. Not many people remember his name nowadays, but a lot more would’ve—if he’d survived.

As a young man still in his twenties, Andrew was more than making his way. He was giving that guy with the Dutch name a run for his money. You know the one. James Vanderzee. He’s famous now. Took a load of pictures of Harlem hot-shots: Florence Mills, Hazel Scott, and the like. Don’t get me wrong. Vanderzee was something all right. But the way people talk, you’d think he was the only colored man taking pictures in Harlem back then; that just wasn’t so.

There was a man named Woodard—William E. Woodard—and a couple of guys by the name of Vernon and King on West 135th, and Walter Baker, up on 133rd and Lenox. There was even a woman, Winfred Hall. She and her husband ran an institute that taught photography.

Then, there was Andrew.

I was a reporter for the Harlem Chronicle. That little paper kept up with all the doings in Harlem. It was a weekly and it was hot. We knew who was doing what, where and with whom. But to say it was all gossip would be unfair. This was a legitimate paper and we dished out any social news that was fit to print.

I had my own column, a little slice of life called “Lanie’s World,” sort of a paper within the paper. My photo ran with it, and I got to pick and choose what I wanted to write. I’d just finished covering the Joplin murder trial when the King story broke and I jumped on it.

Brandy Sullivan was one of those café au lait chorines you always heard tell about. “Tall, tan and terrific,” she was the lead dancer in the nightly floor show at the Cotton Club. She had grown up in the tobacco fields of Virginia, then come up North to the big city and made good. All was going well for Brandy, till the night she met a pit bull by the name of Big Earl, and up and married him.

Big Earl was a prizefighter, heavyweight division. He was also an albino. The white folks didn’t know what to make of him, this giant black man with milky white skin, but the colored folk loved him. He didn’t have the elegance of Jack Johnson or the charm of Tiger Flowers, but he did pack a mean right uppercut. He was hot-headed, brash and jealous. He knew not to threaten white men if they came on to Brandy, but he’d deck a colored man in a second.

Which brings us back to Andrew.

Rumor had it that Brandy had fallen for him. You see, Andrew wasn’t just talented. He was fine, one of the finest men I have ever seen, and I’ve seen aplenty. To top it off, he didn’t seem to know just how fine he was. He was a good man, thoughtful, funny and kind—had a heart as big as a mountain. Legions of people were in love with him, most of them women, but more than a few men could’ve been counted in there, too.

To Andrew, that was all just bunkum. It meant nothing. He had his love, his “one true love,” and that was his wife, Tessie. She was talented, too. Her collection of essays, The Bitter Herbs of May, had drawn rave reviews. I had read it, and loved it. Tessie, it seemed, was one of those rare, gifted writers whose work appealed to both the critic and the general public.

Unfortunately, Tessie herself didn’t appeal to either one. She was reserved, socially awkward and beyond plain. I had spoken to her only briefly before the events I’m about to relate, and that was at a party she’d attended with Andrew. She had seemed out of place. She was tall and thin and about as curvy as a pencil. So, she actually had the perfect figure for the times we lived in. But she had a way of dressing like a middle-aged spinster and those thick spectacles she had propped on her nose didn’t help.

Rumor had it that she was every bit as smart and perceptive as the esteemed W. E. B. DuBois. Having read her work, I didn’t doubt it. But she was a woman, and an unfashionable one at that, living in a society that valued beauty over brains, silliness over sanity. So, she got no kudos for her intelligence, only darts for her dullness.

In point of fact, a lot of folk didn’t think Tessie made a fitting wife for such a fine-looking man. I remember hearing them whispering at that party, talking about her as she and I walked by.

“Hmm-hmph! Just what does he see in her?”

Nevertheless, for a while there, it looked as though they both were going to be stars. Andrew was making marks as a photographer and Tessie, popular or not, was destined for a place at the top, right up there with Zora Neale Hurston, Nella Larson and Jessie Fauset, on the vanguard of Harlem literati.

But all that changed one bleak September night, and all it took was a bullet—two to be exact.