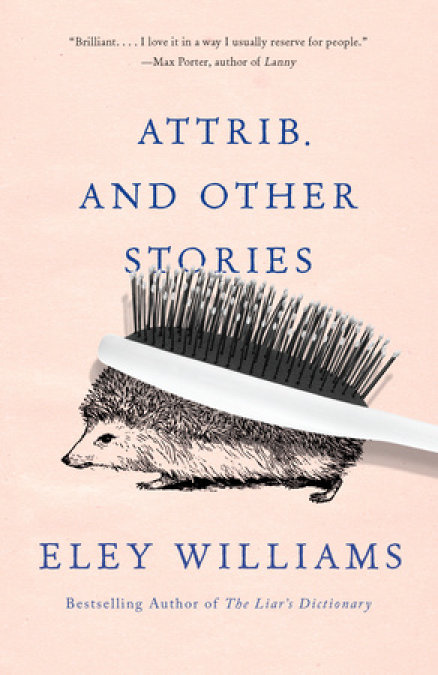 "It's just the real inexplicable gorgeous brilliant thing this book. I love it in a way I usually reserve for people."
--Max Porter

Eley Williams has been a literary sensation ever since this collection of experimental short fiction was published in the UK. Lauded as "elegant" (The Guardian) and "exhilarating" (Vanity Fair), Attrib. and Other Stories won the James Tait Black Prize, was longlisted for the Dylan Thomas Prize, and was named a best book of the year by The Guardian.

Attrib. presents a cast of unforgettable characters standing at the precipice of emotional events (a disastrous breakup, a successful date, an unexpected arrival) and finding it fiendishly impossible to express themselves. With intimate, irreverent, and playful prose, Eley Williams rejoices in both the possibilities and limitations of language, as well as the very human need to be known and understood--despite our own best efforts.

Original and inventive in the vein of Lydia Davis, Deborah Eisenberg, and Amy Hempel, these stories are "emotionally delicate and tenderly introspective" (New Statesman) and "an absolute must-read" (The London Magazine).

or Writing Love Letters, Before I Forget How to Use Them

or These Miserable Loops Look So Much Better on

Paper Than in Practice)

The plot of this is not and will not be obvious. I’m pretending that this is not important. It is quite likely that I have lost it anyway. The plot. Related—where are my glasses? For some reason I find that if I say,

in an authoritative way while searching for them it seems more likely that I shall find them or that I will somehow invoke them into being. This is a strategy that does not work for finding one’s dignity nor for finding you but glasses—possibly. Announcing my intention to find them at least conveys a sense of control as I dither around picking up ornaments and looking under curtains. There is a paper published online that sets out this thesis, and I shall quote it aloud to make it real: speech can alter “ongoing cognitive (and even perceptual) processing in nontrivial ways” effectively allowing one to concentrate better. Say it ain’t so—announce, with an ounce of courage and conviction and the world’s your—

the world’s yours for the mistaking.

For what it’s worth, concentrating, I can say that you altered me in nontrivial ways.

The pursuit was anything but trivial, at least. I remember that.

I completely lost it (the plot, not the glasses—they’re only mislaid) about two weeks ago around the same time that I mislaid you. If you were here you would make a filthy joke about my use of that word, about you being miss laid. Scratch that, then. Screw it or unscrew that word out of place. Two weeks ago is when I lost it—the plot—round about the same time that you were not mislaid by me but were misplaced. When you misplaced me. Two weeks ago is when we ceased to converge by the bedside table, beneath the sofa, by the fridge.

I have realised with some embarrassment that the reason I could not find them is of course because I am wearing my glasses. This is like that time someone (I am being coy— I mean you) complemented no complimented my eyes and suddenly I wished that I could pop them out onto your palm and say, “Hey, damn right, they’re the best thing about me; not, you know, functionally, of course, hence the glasses, but in terms of form; want to swap? I wanna see you in ’em,” which would of course be impossible for three reasons and horrible for about twelve, but

—what was I saying?—

even though I now know the whereabouts of my glasses the feeling of lack remains. I have lost something else so here I must remain, poised to retrieve. If I say,

in an authoritative way perhaps it is more likely that I will find it, whatever it might be.

We looked up my condition after coming home from the doctor’s the first time where it had been explained to us in a pale room with a ticking light. We had looked the word up in the dictionary. I did not tell you, but I had imagined using my plucked-out eye’s optic nerve as a bookmark to save the definition’s place. We also searched online to make sure that our Internet history was keeping up with our life events. I spelt the word with an f at first and, sighing, you took control of the keyboard.

A P H A S I A, you typed. It required both of your hands in the same way that origami might or the act of unwrapping a parcel. We browsed. Aphasia: a disturbance of the comprehension and formulation of language caused by dysfunction in specific brain regions.

“You can’t spell aphrodisiac without aphasia,” you said later, trying to make a filthy joke out of it and holding me.

“Yes you can,” I said into your jumper after a while. This gave me time to work it out.

And “Gimme me an A!” you had said in your cheerleader voice. I cannot remember what happened next. I probably did give you something. After all, your innuendo-led ears would probably not let me get away without giving you one but it is impossible to recall. I have forgotten, basically, and now I have misplaced you.

I have swept so many words under my tongue and out of the porches of my ear, out of sight and out of mind. Over the years your ears must have become spoked and fairly bristling with my Xs and Ks and Ts and teasing.

The plot, yes—the condition of its being lost. I have a great deal of nostalgia for having the plot and a full vocabulary. Both have been lost gradually, along with the—what is it—marbles. My marbles, specifically. We have come to specific marbles. I have lost it, I have lost my marbles and I have lost the plot—the Holy Trinity of losing I have lost my faith in—wham bam thank you m’—ma—mate. Maybe the plot was connected with my marbles in some way. Maybe one plays marbles on a plot, plot being synonymous with pitch or field or court. I lost them all long ago is what’s important. Two weeks ago. You took my marbles and it with you and I appear to have mislaid the plot. In the film-of-the-musical-of-the-play, in Hertford Hereford and Hampshire Hurricanes Hardly Ever Happened but Eliza Doolittle was fed marbles in order to improve her diction not to lose a good thing she had going, and no doubt if you were here you would make a dirty joke about that word too. I shall shun diction, then; a cunning stunt. Spoonerisms, tongue-twisters—I remember that you could make those words affectionate and filthy as soon as you found them and me in close confines.

One cannot spell eyes without having to also spell yes. This was always especially the case with you, and with yours. Incidentally, my dictionary is definitely getting smaller. This might be because I am moving away from it or because it is shrivelling.

“What’s your favourite word?” you asked me on our first date.

“Excellent,” you had said. You may have even clapped. “Favourite letter?” you continued without offering your own answer. You tended to take charge like that. A waiter was sizing-up our shoes, and handing you the bill.

I was trying to seem interesting, so I replied, Q.

“Q?” you echoed, somewhat accusingly, as you pressed your PIN code into the machine.

“Q needs U to be useful,” you had said, and I remember that I rolled my eyes out of my head and you winked in a pantomime way and touched my wrist with your hand.

“I consider favourite letters to be a better indicator of personality than star signs,” you had said, and I had thought, oh great this person’s a massive weirdo and is going to try and inculcate me into a reiki-practising cheese-cloth wearing bewhiskered cult or sect, because I used to use words like inculcate without thinking twice even though I knew at the time that it was unadvised. Inadvised. But by God you were charming, said the other half of my brain. Cult leaders often are, replied the first half. GO ATROPHY ON A STALK, said the second half, and it did, I think. Thank goodness. You had evaded my question, I couldn’t help but notice.

“A is a snapped Eiffel Tower. The shape of it. If you were interested in A as a letter I’d assume that you were only interested in half-finishing projects,” you said.

“H is for rugby fans, and penalties. F and E and Y are all prongs.”

And prongs are for stabbing at something, I thought: letters as stabs in the dark. I do not know why you picked these letters as examples. You were misspelling the alphabet.

“What does Q imply?”

You had cocked your head as if the answer might slide out of your ear onto the table. “Upper case or lower case?” you asked, gravely.

“That would be telling,” I said, pretending that I knew how to flirt.

“It stands for questions, often, doesn’t it?” you said, and I’m sure that I did not know how to answer. We went to a bar.