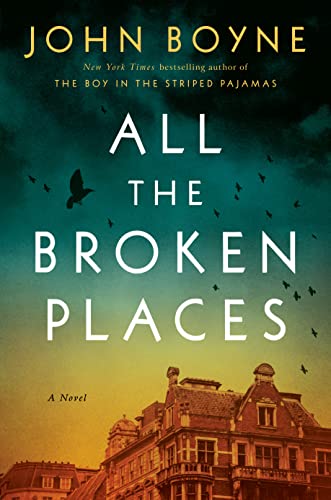 “You can’t prepare yourself for the magnitude and emotional impact of this powerful novel.” —John Irving, #1 New York Times bestselling author of The World According to Garp

From the New York Times bestselling author John Boyne, a devastating, beautiful story about a woman who must confront the sins of her own terrible past, and a present in which it is never too late for bravery

Then, a new family moves into the apartment below her. In spite of herself, Gretel can’t help but begin a friendship with the little boy, Henry, though his presence brings back memories she would rather forget. One night, she witnesses a disturbing, violent argument between Henry’s beautiful mother and his arrogant father, one that threatens Gretel’s hard-won, self-contained existence.

All The Broken Places moves back and forth in time between Gretel’s girlhood in Germany to present-day London as a woman whose life has been haunted by the past.  Now, Gretel faces a similar crossroads to one she encountered long ago. Back then, she denied her own complicity, but now, faced with a chance to interrogate her guilt, grief and remorse, she can choose  to save a young boy. If she does, she will be forced to reveal the secrets she has spent a lifetime protecting. This time, she can make a different choice than before—whatever the cost to herself…. 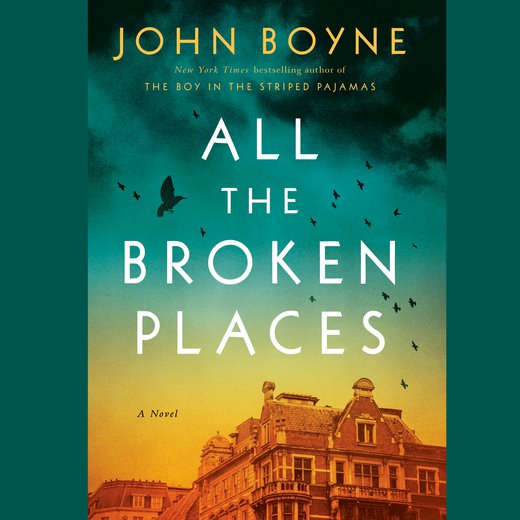 Mother and I escaped Germany in early 1946, only a few months after the war ended, traveling by train from what was left of Berlin to what was left of Paris. Fifteen years old and knowing little of life, I was still coming to terms with the fact that the Axis had been defeated. Father had spoken with such confidence of the genetic superiority of our race and of the Führer’s incomparable skills as a military strategist that victory had always seemed assured. And yet, somehow, we had lost.

The journey of almost seven hundred miles across the continent did little to encourage optimism for the future. The cities we passed through were marked by the destruction of recent years while the faces of the people I saw in the stations and carriages were not cheered by the end of the war but scarred by its effects. There was a sense of exhaustion everywhere, a growing realization that Europe could not return to how it had been in 1938 but needed to be rebuilt entirely, as did the spirits of its inhabitants.

The city of my birth had been almost entirely reduced to rubble now, its spoils divided between four of our conquerors. For our protection, we remained hidden in the basements of those few true believers whose homes were still standing until we could be provided with the false papers that would ensure our safe removal from Germany. Our passports now bore the surname of Guéymard, the pronunciation of which I practiced repeatedly in order to ensure that I sounded as authentic as possible, but while Mother was now to be called Nathalie—my grandmother’s name—I remained Gretel.

Every day, fresh details of what had taken place at the camps came to light and Father’s name was becoming a byword for criminality of the most heinous nature. While no one suggested that we were as culpable as him, Mother believed that it would spell disaster for us to reveal ourselves to the authorities. I agreed for, like her, I was frightened, although it shocked me to think that anyone could consider me complicit in the atrocities. It’s true that, since my tenth birthday, I had been a member of the Jungmädelbund, but so had every other young girl in Germany. It was mandatory, after all, just like being part of the Deutsches Jungvolk was compulsory for ten-year-old boys. But I had been far less interested in studying the ideology of the party than in taking part in the regular sporting activities with my friends. And when we arrived at that other place, I had only gone beyond the fence once, on that single day that Father had brought me into the camp to observe his work. I tried to tell myself that I had been a bystander, nothing more, and that my conscience was clear, but already I was beginning to question my own involvement in the events I had witnessed.

As our train entered France, however, I grew worried that our accents might give us away. Surely, I reasoned, the recently liberated citizens of Paris, shamed by their prompt capitulation in 1940, would react aggressively toward anyone who spoke as we did? My concern was proven correct when, despite demonstrating that we had more than enough money for a lengthy stay, we were refused rooms at five separate boarding houses; it was only when a woman in place Vendôme took pity on us and shared the address of a nearby lodging where, she said, the landlady asked no questions that we found somewhere to live. Had it not been for her, we might have ended up the wealthiest indigents on the streets.

The room we rented was on the eastern part of Île de la Cité and in those early days I preferred to remain close to home, confining myself to walking the short distance from Pont de Sully to Pont Neuf and back again in endless loops, anxious about venturing across bridges into unknown terrain. Sometimes I thought of my brother, who had longed to be an explorer, and of how much he would have enjoyed deciphering those unfamiliar streets, but, at such moments, I was always quick to dismiss his memory.

Mother and I had been living on the Île for two months before I summoned the courage to make my way to le Jardin du Luxembourg, where an abundance of greenery made me feel as if I had stumbled upon Paradise. Such a contrast, I thought, to when we had arrived at that other place and been struck by its barren, desolate nature. Here, one inhaled the perfume of life; there, one choked on the stench of death. I wandered as if in a daze from the Palais to the Medici fountain, and from there toward the pool, only turning away when I saw a coterie of small boys placing wooden boats in the water, the light breeze taking their vessels across to their playmates on the other side. Their laughter and excited conversation provided an upsetting music after the muted distress with which I had become familiar and I struggled to understand how a single continent could play host to such extremes of beauty and ugliness.

One afternoon, taking shelter from the sun on a bench near the boulodrome, I found myself consumed by both grief and guilt, and with tears falling down my face. A handsome boy, perhaps two years my senior, approached wearing a concerned expression to ask what was wrong. I looked up and felt a stirring of desire, a longing for him to put his arms around me or allow me to rest my head upon his shoulder, but when I spoke I fell into old speech patterns, my German accent overpowering my French, and he took a step back, staring at me with undisguised contempt, before summoning all the anger he felt toward my kind and spitting violently in my face and marching away. Strangely, his actions did not diminish my hunger for his touch but increased it. Wiping my cheeks dry, I ran after him, grabbed him by the arm and invited him to take me into the trees, telling him that he could do whatever he wanted with me in the secluded space.

“You can hurt me if you like,” I whispered, closing my eyes, thinking that he might slap me hard, drive his fist into my stomach, break my nose.

“Why would you want that?” he asked, his tone betraying an innocence that belied his beauty.

He seemed both aroused and repulsed and looked around to see whether anyone was watching before glancing toward the copse that I had indicated. Licking his lips, he observed the swell of my breasts, but when I took him by the hand my touch insulted him and he pulled away, calling me a whore, une putain, and broke into a run as he disappeared out onto rue Guynemer.

When the weather was good I wandered the streets from early morning, only returning to our lodgings when Mother would already be too drunk to ask how I had passed my time. The elegance that had defined her earlier life was beginning to fall away now but she was still a handsome woman and I wondered whether she might search for a new husband, someone who could take care of us. But it did not seem that she wanted companionship or love, preferring to be left alone with her thoughts as she made her way from bar to bar. She was a quiet drunk. She sat in darkened corners nursing bottles of wine, scratching at invisible marks upon wooden tabletops while making sure never to cause a scene that might see her exiled to the street. Once, our paths crossed as the sun disappeared over the Bois de Boulogne and she approached me unsteadily before taking my arm and asking me the time. She didn’t appear to realize that it was her own daughter she was addressing. When I answered, she smiled in relief—it was growing dark, but the bars would remain open for hours yet—and she continued in the direction of the bright, seductive lights that dotted the Île. If I vanished entirely, I wondered, would she forget that I had ever existed?

We shared a bed and I hated waking next to her, inhaling the stench of sleep-infused liquor that poisoned her breath. On opening her eyes, she would sit up in a moment of confusion, but then the memories would return and her eyes would close as she tried to ease her way back into oblivion. When she finally accepted the indecency of the daylight and dragged herself out from beneath the sheets, she would give herself a rudimentary wash in the sink before pulling on a dress and making her way outside, happy to repeat every moment of the day before, and the day before that, and the day before that.

She kept our money and valuables in an old satchel at the back of the wardrobe, and I watched as our small fortune began to diminish. Relatively speaking, we were comfortable—the true believers had seen to that—but Mother refused to invest more in our accommodation, shaking her head whenever I suggested that we rent a little flat of our own in one of the cheaper parts of the city. It seemed that she had a simple plan for her life now, to drink away the nightmares, and as long as she had a bed to sleep in and a bottle to empty, nothing else mattered. What a far cry this was from the woman in whose embrace I had spent my early years, the glamorous society wife who had performed like a film star, sporting the latest hairstyles and dressing in the finest gowns.

Those two women could not have been more different, and each would have despised the other.