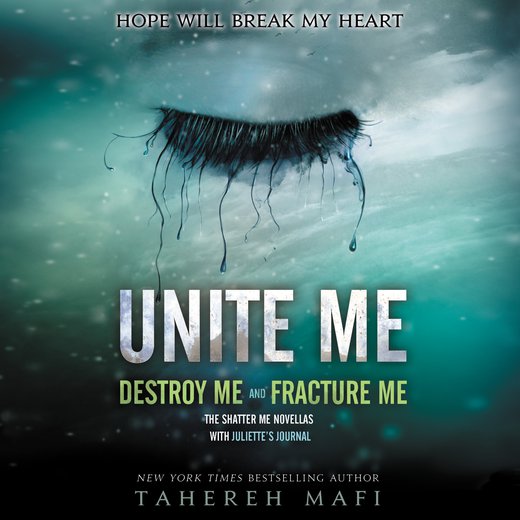 Perfect for fans of Tahereh Mafi's New York Times bestselling Shatter Me trilogy, this audiobook collects her two companion novellas, Fracture Me and Destroy Me, for the first time in audio. It also features an exclusive look into Juliette's journal and a preview of Ignite Me, the third installment of the series.

Destroy Me tells the events between Shatter Me and Unravel Me from Warner's point of view. Even though Juliette shot him in order to escape, Warner can't stop thinking about her—and he'll do anything to get her back. But when the Supreme Commander of The Reestablishment arrives, he has much different plans for Juliette. Plans Warner cannot allow.

Fracture Me is told from Adam's perspective and bridges the gap between Unravel Me and Ignite Me. As the Omega Point rebels prepare to fight the Sector 45 soldiers, Adam's more focused on the safety of Juliette, Kenji, and his brother. The Reestablishment will do anything to crush the resistance . . . including killing everyone Adam cares about.

The Shatter Me series is perfect for fans who crave action-packed young adult novels with tantalizing romance like Divergent and The Hunger Games. This captivating story, which combines the best of dystopian and paranormal, was praised as "a thrilling, high-stakes saga of self-discovery and forbidden love" by Ransom Riggs, bestselling author of Miss Peregrine's Home for Peculiar Children.

And don't miss Defy Me, the shocking fifth book in the Shatter Me series!