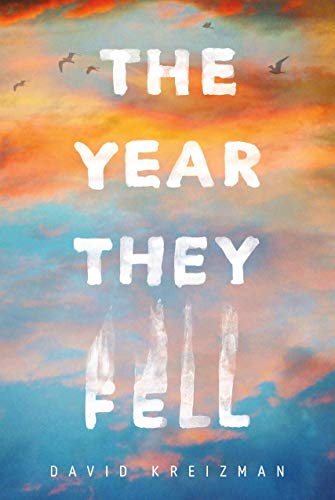 When a horrible tragedy unites five very different high school seniors, they discover the worst moment of your life can help determine who you really are in the powerful YA novel, The Year They Fell.

Josie, Jack, Archie, Harrison, and Dayana were inseparable as preschoolers. But that was before high school, before parties and football and getting into the right college. Now, as senior year approaches, they're basically strangers to each other.

Until they’re pulled back together when their parents die in a plane crash. These former friends are suddenly on their own. And they’re the only people who can really understand how that feels.

To survive, the group must face the issues that drove them apart, reveal secrets they’ve kept since childhood, and discover who they’re meant to be. And in the face of public scrutiny, they’ll confront mysteries their parents left behind—betrayals that threaten to break the friendships apart again.

A new family is forged in this heartbreaking, funny, and surprising book from award-winning storyteller David Kreizman. It's a deeply felt, complex journey into adulthood, exploring issues of grief, sexual assault, racism, and trauma.

“Teen drama abounds in this story about loss and love.” —Kirkus Reviews

“Readers will find the characters relatable as they navigate the challenging time from senior year into adulthood following tragedy.” —School Library Journal


On the night their parents’ plane did a header into the Caribbean Sea, Josie and Jack Clay threw the biggest blowout River Bank High School had ever seen. Wait. That came out really shitty. It’s not like the twins knew about the crash during the party. Nobody in attendance did, especially not Archie Gallagher and Harrison Rebkin, whose parents were on the same doomed flight. I got my party on the way I always did: alone in my tiny, sweltering room, in front of the computer, stalking them all on social media.

I prepared my usual dinner: one blueberry Greek yogurt, two cans of Rock ’n’ Roar energy drink, unicorn puke in my vape pen, and as many pills as I could swipe from Papi’s stash. With my parents away on vacation, I had my pick of the in-home pharmacy. I lined up the bottles at the edge of my laptop like a tiny audience. Alprazolam, clonazepam, sertraline … the names of at least four different doctors on the labels. My father didn’t move his ass for much those days, but he never missed an opportunity to score from his enabler of the week.

I rattled out a few yellows with a name I recognized from the commercials. You know, the one starring White-Lady-Riding-Bike-with-Cat-in-Basket and Whiter-Dad-Climbing-Tree-with-Adorable-Kids. I swallowed the pills and washed them down with the energy bevs. Now there’s a commercial I could get behind. Brown-Teen-with-Purple-Hair-and-Face-Full-of-Piercings swallows a magic pill and suddenly the world comes to life in vibrant colors. Birds sing and a butterfly lands on her shoulder. Her clothes explode in flowery pinks and ruffles. The rings and studs drop from her ears, nostril, septum, eyebrow, and upper lip. Mami would empty the rest of the bank account for that little miracle. What wouldn’t she give to have her precious little princesa back?

While I waited for Papi’s little helpers to do their thing, I joined Josie Clay’s #epicClayparty #LastPartyBeforeSeniorYear, already in progress. I clicked on a photo of blonde, beautiful Josie and her ginormous shaved-headed brother, Jack, on the porch pre-party. I hit print and watched as it rolled out.

Cyber lurking wasn’t something I was super proud of. It’s just what I did. It had been a hundred years since Josie, Jack, Archie, Harrison, and I were in the same class at Sunny Horizons Preschool. Josie dropped me as her bestie a long time ago. Or maybe I dropped her. Whatever. Things happen. People change. I wasn’t bitter or anything.

If I’m being honest—and why the shit not at this point—I kept watch on a lot of people. Their Snapchats, Instas and finstas. I was pretty much up-to-date on Jack, his whole football team, and the rest of the student council; pretty much all of Josie’s followers. And she had A LOT of followers. All those characters I saw in the hallways. Spray-tanned white girls in miniskirts, making out with their hoodie-wearing boyfriends. I’m not saying I wanted to be part of their group. They were mostly asswaffles anyway. Their music was poser urban electronic techno-crap. They were fake to everyone outside their group and even faker to each other.

But they had drama. Stories. Lately my story was just a lot of me sitting home by myself getting high.

As #epicClayparty #LastPartyBeforeSeniorYear cranked up, Josie and her crew of look-alikes seemed to be spending more time posting pics, showing the world they were having fun rather than actually having fun. All of her new besties must have wanted a selfie with Josie. Josie in her clean white dress, holding a red cup and smiling like she’d just won Miss Teen New Jersey. Cody Salamone wearing a scarf and winter beanie with his board shorts, hugged her from behind. Was he her newest boyfriend? How long would he last? Josie was everywhere, that grin at the center of every post from the party. The smile wasn’t real though. I knew that smile, the one that said “I’m not really here right now.” It never quite reached her eyes.

While their house was under siege, Josie’s ’rents were on their way to the islands with Mami and Papi, Archie’s parents, and Harrison’s mom. They’d become friends when we were all in preschool together. And they were still friends, even if we weren’t. I wondered what would happen in a few days when the Clays got home. Maybe they already knew about Josie and Jack’s party and didn’t care. By the time they returned, the cleaning lady would’ve fixed it all up anyway.

’Course my parents wouldn’t have given two mouse balls if I’d thrown a party, invited the entire high school, and provided free meth at the door. Papi wouldn’t even notice, and Mami would be thrilled that I’d at least done something “normal.” Not that anyone would come to my shindig anyway. And who could blame them for avoiding me? I’d heard the rumors: that I’m a vampire or a Santeria witch or a Santeria vampire-witch. That I eat babies for breakfast. Didn’t matter that I was a vegetarian. Most of the time. Not like anybody would talk to me to find out. Mami would say, “Daya, maybe if you try to look a little less … rough, people might not be so afraid to get close to you.” I was okay with the distance. Really, I was.

I scrolled back through the latest posts in my feed, all filtered to perfection. But to me, the action in the background was the real show. There you got to see people in their natural states, when they didn’t know the camera and I were looking. Frosh chick nervously fixing her lacy bra straps. Hot-shit wrestler gazing longingly at his teammate. I was about to scroll past a picture of a bored-looking Jack Clay when I spotted something really fucking weird over his left shoulder.

I clicked and zoomed in on two sad and lonely figures hovering near the snack table. Archie Gallagher clutched the bulky sketchbook jammed under his arm, his thick-framed glasses so smudged with Doritos dust I could barely see his eyes. I’d say he was the last person I’d ever expect to see at Josie’s party, but he was at best tied with the pale, awkward creature looming above him. As far as I knew, Harrison Rebkin hadn’t been to a party since his eighth birthday was shut down when he had a panic attack at Chuck E. Cheese’s. What in Satan’s name were these two doing there? We were all buds back at Sunny Horizons Preschool, but those days were way gone. Our little group had scattered to the winds years ago. No chance Josie invited those two and not me. Right?

With my brain starting to fuzz around the edges, I closed my eyes and saw myself gliding into the party. Atop the perfectly manicured lawn, the crowd would part for me. I’d feel the beat from the sound system going right through my body. Some of the less douchey guys might even check me out. Josie, in the middle of a conversation with a horde of her followers, would sense me at the door. She’d turn and smile, like no time had passed. Like we were four years old and she was my lifeline in the scary world of the Sunny Horizons Preschool playground.

Just like she did then, she’d take my hand and lead me inside, where Jack, Archie, and Harrison were waiting. The five of us, the way it used to be back at Sunny H.

I pulled open the fridge. On shelf after shelf were perfectly lined-up containers, each labeled in Mami’s neat lettering. Food from our native Costa Rica right next to our adopted American “cuisine.” Casado cozying up to pasta with meat sauce and broccoli casserole. I had no desire to touch any of it. I wanted Mami to come home in a few days and see it all still sitting there. Rotting.