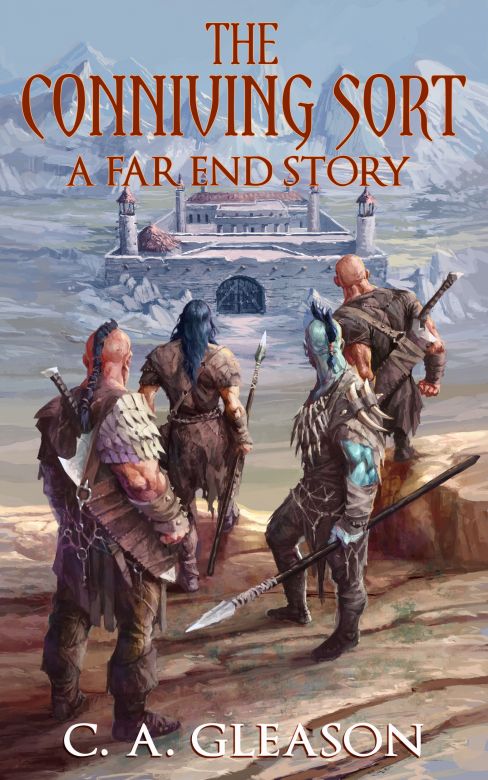 Toiling away at the Shallows Post can be lucrative but because precious goods are traded it attracts thieves and murderers. And since it’s located so close to the water, a blade—swung by a true warrior or the unskilled—isn’t the only threat.

Beasts are always lurking, especially beneath the murky expanse that drives the livelihood. Tremendous water creatures hunt the deep water near the Far End, occasionally capsizing vessels before reaching the shallows, and even snatching Vranigans walking too closely to the waves crashing onto shore.

A good day at the post often means going home alive, and Garmish was fed up with such treacherous living seasons ago, so when like-minded post hands devise a worthwhile—but risky—plan to better themselves, he gladly capitalizes on the opportunity and joins them.

Except in order to set the plot in motion, and intent on leaving the post behind him for good, Garmish must take on an entirely different role, one that is far more dangerous than any he’s ever undertaken and one that few have ever survived.

THE CROWD CLOSED in as if they were to fight next. While avoiding the angry two at the center, both with harsh words and murderous intentions, hurried steps darted in multiple directions, one of which stumbled and fell off the dock, into the crashing waves breaking onto shore, causing laughter, an alarming contrast to the fight.

Only one Vranigan would be the victor, and everyone knew who the victor would be from the moment Hossuk drew his blade. Except for who faced him.

Hossuk knocked away blade strikes stabbing toward his face, the older Krimzin taller than the younger one, both Vranigans with reddish flesh wanting to kill the other for reasons Garmish didn’t understand. It was as if Hossuk were making a game of it, the ruthless brute displaying his viciousness to the crowd, an attempt to entertain them.

His opponent was out of breath, surely realizing the mistake of challenging him, wondering if maybe he should have let whatever triggered his temper to subside without confrontation.

“I only wanted some Yollopy plants for my female,” he gasped.

“This isn’t that kind of post,” Hossuk said, “if there is any kind of growth that interests this sort, it’s Theed flowers to make poison. I’m in the right!”

Blood would spill soon. Hossuk backed away, enlarging the crowd of onlookers, them anticipating what was about to happen like bloodthirsty Quillers. The out of breath Krimzin, who Garmish had never seen before, who had surely never traded here before, and had surely never met Hossuk or heard of his skill with a blade, made desperate and weakened lunges forward.

Hossuk took careful but planned steps backward, and after another attempted stab at his face, he advanced quickly, blocking the opposing blade and ramming his own blade deep into his opponent’s chest. The Vranigan hollered, but when Hossuk twisted the blade and yanked it out, he grunted and fell onto his back, squirming as he died.

Pooling blood caused gasps from the gawkers, and Garmish rolled his eyes. What had they expected to happen? As if they didn’t know. As if they weren’t hoping for it.

Hossuk watched the trader die as coldly as if he were watching a Farppy flip and twitch in its final death throes after being fished onto shore.

Brodax had been observing too, and he finally approached the crowd, individuals breaking around him, and he spoke with Hossuk, surely about what had caused the blade fight to happen in the first place, nodding along as Hossuk explained.

The explanation was brief, and Brodax turned, pushing with his hands to break up the crowd even more, shoving them if they were post hands to get them back to work, asking if anyone knew who had died, or explaining to traders to get their business done with and move on.

Garmish took advantage of the spectacle of the fight by separating goods at a leisurely pace, and he noticed the Efftrul, Valin, at a distance, watching it all too. Valin pointed at a few post hands, designating them to bury the body in the local boneyard.

When Garmish glanced over to where the blade fight had taken place, Hossuk locked eyes with him, an arrogant grin on his face. Ignoring his own thoughts about what it meant, Garmish just went back to work.

“YOU GOT A problem with what I did?”

Hossuk had appeared before him, and Garmish resisted being startled. “Everyone was watching. No one knows who might be the next victim of your blade.”

“Keep up the judgment and the next will be you.”

Garmish was flabbergasted. “I’m doing what I always do, minding my own—”

“Thinking you’re better than everyone else, Braunzin.”

Which was true. Garmish was definitely a better Vranigan than the muscular Krimzin brute before him, in every way he could think of aside from strength and skill with a blade. Garmish was tempted to even say so, instead he finished his sentence.

“Minding my own business and doing my work. Maybe you should do the same.”

“You think I need to work harder, is that it? You think you do more than me?”

Questions that were actually traps. But Garmish didn’t care at that point. He was used to bickering with Hossuk.

“Yes, I do. You might accomplish more if you took a break from murdering traders.”

A familiar arrogance spread across Hossuk’s face, as if what Garmish mentioned was exactly what he’d wanted to hear.

But he didn’t make a move, clearly debating what he would do next, and then the only Vranigan keeping Garmish alive at the moment made his presence known; Brodax, and with irritation.

Hossuk looked at Brodax, the sneer toward Garmish disappearing before continuing on, no doubt to harass a different post hand.

ARGUMENTS WERE COMMON, absolutely nothing new at the Shallows Post, and Garmish had gotten into plenty of them during his life. Before working there, during, and even after a workday, on his way home. Bickering with a fellow young one was one of his earliest memories; seemed endless, as if they might continue until his last day alive, but it wasn’t his fault. Other Vranigans simply weren’t as smart as him.

Still, Garmish tried to stay motivated, and mentally prepared himself as he made his way toward the beginning of yet another workday. Likely, he would get into some sort of confrontation, a verbal one, either with a trader or a fellow post hand, but skillful words usually deterred a striking blade. It never hurt that Brodax looked after him.

Hopefully the Shallows Post would be the last post Garmish would ever have to work at. Post work began for him when he had been made to go to a different one by his father when he was very young. Garmish’s father had been killed shortly after, dragged off and eaten by Quillers—according to his mother, who’d suffered the same fate seasons later—and Garmish had worked for so long after that now, he barely remembered either of them.

Worked there for so long at that kind of work that he barely remembered why he was still doing it, other than for Vor. Working the post hadn’t been his only role; he’d also done the dangerous work of harvesting Blaze, but he was meant for so much more than being a common worker.

Edginess was typical of what went on at a post; everyone was constantly stressed to get everything done or leave as soon as possible—post hands and traders—but it was especially that way for Garmish today, as he’d gotten into yet another confrontation with Hossuk the day before.

They’d always danced around it with verbal taunts at one another, as they typically did, and the recent words exchanged had been about which post hand got the most work done. Typical workday, silly argument, but Garmish realized he shouldn’t engage with a beast of a Vranigan such as Hossuk at all. Especially shortly after Hossuk stabbed someone to death.

Garmish knew better. It wasn’t as if Hossuk were the type of Vranigan who would be interested in—or even attempt—to understand someone else’s perspective. Plus it was well-known that Hossuk would rather pull a blade than use words, so Garmish wasn’t going to bring up the matter about who worked the post the most again, even if he, and everyone else, knew the truth.

And the truth was that Garmish got more done than any of the other post hands, his anger and frustration giving him extra energy. That was why he’d earned the respect of Brodax and even Valin. It was probably why Hossuk was so often hostile toward him. In fact, he’d avoid Hossuk altogether if he could help it, not even work near him, which wasn’t so difficult to do; there was a constant crowd of post hands and traders mixing together.

Hossuk seemed to always be looking to argue with anyone who wouldn’t back down from him, was prone to violence, and Garmish didn’t want to get himself murdered over a silly argument. For obvious reasons—not wanting to lower himself—but also before his potential was realized. So, as always, he tried to remain positive, which for him meant not voicing the negativity flooding his mind. His role as post hand wasn’t going to change soon that he could foresee.

Being a post hand was a reliable living and dependable in ways most roles were not, especially if done well, and Garmish knew he did do it well. That was accurate, and others knew it to be also, but he was tired of it. All of it. He’d had enough of catering to every kind of filth, Vranigans who’d done something nefarious, acquired goods of worth from that nefariousness and were hoping to trade for it and be on their way as soon as possible.

Season after season it was the same.

He’d done it for longer than he ever should have. Sure, he could work at the post, and live near it for the rest of his life—it was a lucrative living, even without theft—but he knew it wasn’t for him because it wouldn’t attract a female such as Yana.

He often wondered what the difference was between his life and a slave’s. Freedom at night? But that was probably all.

Slave vessels had apparently passed through the Shallows Post seasons before he’d worked there, but Garmish had never seen one. If he ever did, he might consider climbing aboard. Better than doing work such as the usual dreck. Most would consider his outlook spoiled or grim, but Garmish could argue that they thought so because they weren’t meant for something better as he was, and he was the uncommon Vranigan who understood the difference.

Some Vranigans were simply better than other ones, stronger or smarter, and Garmish definitely understood what kind of Vranigan he was.