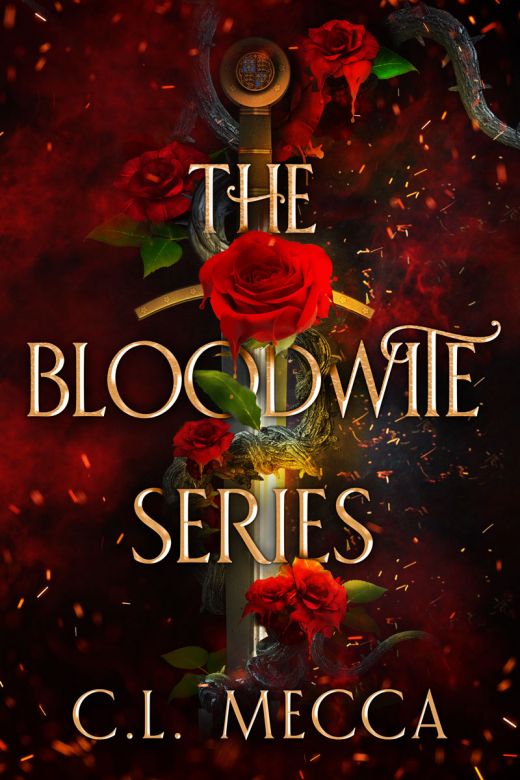 All four novels in the completed Bloodwite series, including the brand-new fourth book: The Vampire’s Temptation, The Immortal’s Salvation, The Hunter’s Affection, and the NEW, full-length series conclusion, The Assassin’s Redemption.Even cursed blood can fall prey to love’s bite.Kenton Morley and Lawrence Derrickson have hated each other ever since they were feuding border lords in medieval England and Scotland . . . seven hundred years ago, when their bloodlines were cursed, birthing the world’s first vampires.Their feud has since carried through the centuries as the Morley brothers seek to destroy the Cheld—the only line of humans capable of killing their kind—while the Derricksons seek to protect them.When the vampires move to Stone Haven, Pennsylvania, Alessandra Fiore and her friends find themselves caught in the middle of an ancient feud that threatens to shatter the peace in their sleepy, tight-knit town.The Vampire’s Temptation:Kenton is seeking to kill her. Lawrence is trying to save her. What’s a girl to do? Especially when one of them has a devilish twinkle in his eyes that she just can’t say no to. And when the decision could cost Alessandra her life.The Immortal’s Salvation:Lawrence feels he’s finally found a home, and the love of his long life, in Alessandra’s best friend Toni, but trouble soon finds him in Stone Haven, forcing him to decide what matters most—desire or duty. Family or his own heart.The Hunter’s Affection:The English teacher is everything Torr Derrickson is not. A small-town girl. A rule follower. And very much a human. She’s the last woman Torr wants in his life . . . yet the first one to ever set his blood on fire. Forced together, the two opposites must decide between passion and reputation.The Assassin’s Redemption:Of all the original vampires, only one is the deadliest, the most ruthless, and a persona non grata when he arrives in Stone Haven . . . just because he once tried to kill his sister-in-law Alessandra. The woman was Cheld, after all, and Rowan Morley has been protecting his brothers from the vampire hunters for over seven hundred years.He won’t stop now, even when Shayla Foster, a lovely “little witch”—as well as Alessandra’s old friend—brings him to his knees. Instead, Rowan will do what he’s done for centuries.Get up, brush off the dust, and kill anyone who gets in his way.

“You have exactly three minutes to explain your mate’s words before I rip out your heart.”

The bastard glared at him, saying nothing.

It wouldn’t be long before this guy's friends came calling, which left two options. Take on a gang of Sect members alone or kill him and move on. Rowan had gotten what he came for—confirmation of the vampire hunter’s lair. He should just be done with it . . .

A tingling at the back of his neck complicated matters.

Dammit. This was the last thing he needed at the moment.

Turning at the sound of his brother’s voice, Rowan kept his hands around the Sect’s member’s throat. He didn’t ask how Drake found him. A skilled tracker, his brother was always able to sense when his family members were nearby. He must have been following the same lead.

“His buddy asked about Kenton,” Rowan explained. “I won’t kill him until he tells me why.”

Drake rolled his eyes. “For a seven-hundred-year-old predator, you are remarkably stupid, Rowan. What leverage do you have if he knows you’re planning to kill him anyway?”

With a cracking sound of his hand, he reached inside the Cheld’s chest. The man’s still-warm heart dripping blood onto Rowan’s jeans, Rowan tossed it to the side and stood.

“We have to go.” He knew Drake was right about that, at least. A final glance at the body of his enemy, and Rowan left the old stable house, which wasn’t far from the ancient castle. Sure enough, a half dozen men walked toward them, spotting him and Drake.

Even though the very-human Cheld had developed abilities to rival their vampire counterparts, Rowan and Drake were two of the oldest, two of the original vampires. Which meant no one was faster than them, not even those who dedicated their lives to training for the sole purpose of eliminating every vampire in existence.

Lindisfarne, or Holy Island as it was also called, was a tidal island only accessible for part of the day. Thankfully, low tide allowed them to run away from the castle and back to the mainland.

“They’re still following us,” Drake called from behind. Despite the fact that Rowan and Drake moved farther and farther away, the Cheld continued to hunt them down. And would do so until either they, or the vampires, were dead.

“They won’t give up.” Rowan held out his hand for Drake to stop. It was well past three in the morning, and the streets were dark and mostly abandoned. “Down there.” Rowan pointed to a darkened alley. Drake followed him as they waited for the Cheld to round the corner.

Rowan rolled up his sleeves and waited.

Though not very long.

These Cheld were prepared. Six on two was somewhat of a fair fight, and as they engaged, Rowan narrowly missed an aspen sword to the heart. Instead, it plunged into his shoulder. Pulling it out, he barely had time to return the favor when another of them attempted to lop off his head with a sword.

He never bothered to so much as glance at his brother. Drake could take care of himself, and they’d certainly faced worse odds before. He’d hardly broken a sweat by the time all six Cheld lay on the ground. Two now heartless, three stabbed with the wood swords they’d thought to end Rowan and Drake’s lives with, and one currently beneath him being drained of his blood.

It was the most painful of ways to die, and Rowan wasn’t in the mood for mercy. Writhing beneath him, the man, no older than his own thirty years, made a strangled sound all too familiar to Rowan. Of all the original vampires, none had killed more than him. And he especially relished this particular one.

“Would you be done with it already? I’d prefer not to deal with the aftermath,” Drake said, impatience evident in his tone.

Not in the mood to accommodate his brother after stalking these bastards for the better part of a month, Rowan continued to draw out the Cheld’s inevitable demise. When Drake finally pulled his brother up, he got a hard shove in the shoulder for his efforts.

“Why do you have to be such an asshole sometimes?” Drake walked away before waiting for a response.

“Only sometimes?” With a final glance back at the carnage that the brothers would normally have cleaned up, Rowan wiped blood from his mouth and followed Drake at a less frantic pace than before.

If there were others, they were not on the mainland.

Although vampires could not sense the presence of cloaked Cheld, Rowan’s instincts, born of many lifetimes, told him they were alone.

“I’m staying at Abbey Hall.” Rowan nodded in the opposite direction of where Drake was headed. “This way.”

Drake fell in step with his brother as they navigated their way through the darkened streets.

Drake darted him a disgusted look. “You just single-handedly slaughtered six Cheld and that’s your question? How did I find you?”

Rowan was about to argue the point until he remembered the two men back on Holy Island. Yep, six.

“I was keeping tabs on Torr and his wife Charlotte, who came here last month,” Rowan said, ignoring Drake’s groan. “They had no idea I was even on their heels.”

“You think?” Drake asked, sarcasm dripping from his voice.

“I hung back. Didn’t even go onto the island until they left so they couldn’t sense my presence.”

“How very cautious of you. But yeah, I know they were here already. They said they didn’t find anything.”

Rowan stopped in his tracks. “How do you know that?”

Torr Derrickson was their enemy. At least, he still was to Rowan. For seven hundred years the two families had hated each other, the Scotsmen responsible for turning the Morley family into immortals. And for a hell of a lot more. A fact Drake and the rest of Rowan’s family seemed to have conveniently forgotten. When their older brother Kenton, once the earl of Rockford and still the head of their family, moved to a small town in the States to hunt down a Cheld, as always, the Derricksons were hot on his heels continuing the dance that had carried on for centuries whenever a Cheld came into their powers.

The Morleys hunted the Cheld.

The Derricksons attempted to protect them.

“I know because I talked to him.”

The adrenaline that coursed through Rowan during his kills came flooding back at the reminder that Drake was on speaking terms with a man that should be his enemy.

“And what did your new friend say about the Cheld on Lindisfarne?”

Drake ground his teeth. “He is not my new friend. We’re simply working together toward the same goal.”

“Do you even hear yourself? Working together? With a fucking Derrickson?”

Rowan would do no such thing. “Maybe if Derrickson stayed a little longer he would have confirmed what I just did tonight. Holy Island is a Sect stronghold.” An extremist group of Cheld, the Sect, were a special kind of dangerous to vampires. “And unlike yours, my allegiance is to my family. So if you’ll excuse me, I need to get my things and hightail it out of here.”

Drake caught Rowan’s arm before he walked away. “One, my allegiance is always to you and Kenton first. Why do you think I’m here, dipshit? And two, where are you going?”

Rowan shrugged off his brother’s arm.

“Rowan? Where are you going?” Each consecutive word was more punctuated than the last.

“Like I said, despite the fact that he’s engaged to the enemy, my allegiance is still to Kenton. And he may be in danger.”

Drake eyes narrowed. “What do you mean?”

“I didn’t plan on a bloodbath tonight, despite the fact you think I thrive on it.”

“I’d been keeping my distance until I heard them talking about Kenton.”

Drake’s back straightened at the news.

“When I confronted them, one asked, ‘How’s your brother Kenton?’”

“So naturally, you killed him.”

“And then thought to inquire why he was asking?”

“You’re going to Stone Haven?” Drake correctly guessed, grabbing Rowan’s arm much harder than the first time. “Rowan.” Drake’s tone was more serious than usual. “Alessandra is not Kenton’s fiancée, she’s his wife. And I swear to God, if you attempt to kill your sister-in-law, or any of her family members . . .”

Wife. Rowan hadn’t expected that. “No promises, brother.” Rowan disentangled himself from his brother’s grasp, ignoring the look on Drake’s face. If Kenton wanted his original family to make nice with his new one, maybe he should have married a vampire. Or even a human. Either way, it was time to pay the little town of Stone Haven a visit.