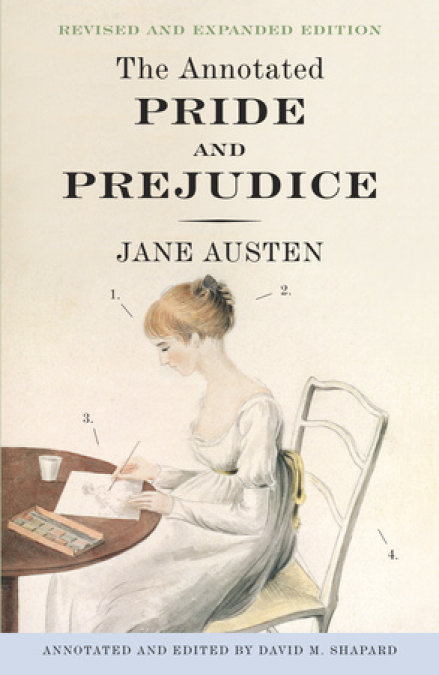 This Revised and Expanded Edition contains hundreds of new notes and illustrations.

The first-ever fully annotated edition of one of the most beloved novels in the world is a sheer delight for Jane Austen fans. Here is the complete text of Pride and Prejudice with thousands of annotations on facing pages, including:

• Citations from Austen’s life, letters, and other writings

Parallels between the novel and Austen’s experience are revealed, along with writings that illuminate her beliefs and opinions.

Archaic words, words still in use whose meanings have changed, and obscure passages are explained.

Insightful notes highlight Austen’s artistry and point out the subtle ways she develops her characters and themes.

of places and objects mentioned in the novel.

• An introduction, a bibliography, and a detailed chronology of events

Of course, one can enjoy the novel without knowing the precise definition of a gentleman, or what it signifies that a character drives a coach rather than a hack chaise, or the rules governing social interaction at a ball, but readers of The Annotated Pride and Prejudice will find that these kinds of details add immeasurably to understanding and enjoying the intricate psychological interplay of Austen’s immortal characters. 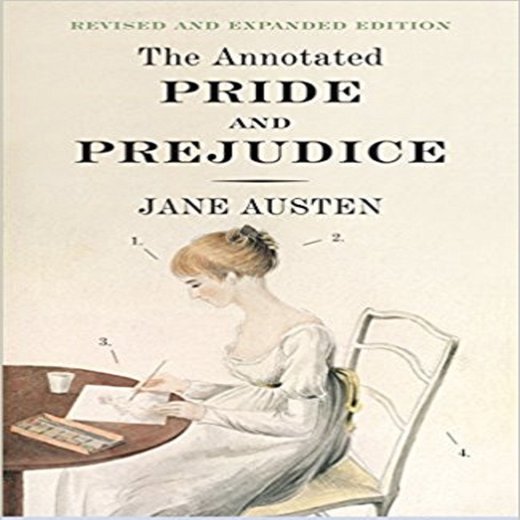 (Note: In the printed book, annotations appear on pages facing the text of the novel.)

1. The famous opening line, with wonderful economy, accomplishes two main purposes. It indicates the novel’s central subject of marriage, along with the financial considerations usually involved in it. It also sets the tone of irony that will pervade the book, for in fact, as we  immediately see, it is the single women in this society who are truly in want, or in need, of a man of large fortune.

2. Netherfield Park is the name of a house in the local area; it is later described as three miles from the Bennets’ residence. It was common for houses, if grand enough, to be given a name, often including words such as “park” to indicate their attractive and rustic character. It was not unusual for large houses to be rented out, for it cost a substantial amount of money to staff and maintain a grand home, and many landowners were unable to afford it. In Jane Austen’s Persuasion the heroine’s family, thanks to the father’s extravagant spending habits, is forced to let their house and move into apartments in the resort city of Bath.

3. Until its concluding paragraph, the rest of this chapter consists entirely of dialogue between Mr. and Mrs. Bennet. Dialogue occupies much of Jane Austen’s novels, and presentation of character through dialogue is one of her fortes. In this case, Mrs. Bennet’s excitable exclamations and exaggerated phrasing reveal her flightiness and impetuousness, while Mr. Bennet’s terseness and irony reveal his cool detachment.

4. A chaise is a type of carriage; it seats three people, all facing forward, and is enclosed (see illustration on p. 16). “Four” refers to the number of horses pulling it. A chaise was a popular vehicle for long-distance travel, so it would be a logical choice for someone coming from far away (though it also turns out to be the carriage this man owns and uses regularly). But a chaise was normally pulled by only two horses, which, while slower, was cheaper. The use of four horses indicates the visitor’s wealth, which is why Mrs. Bennet has bothered to mention it.

5. Michaelmas: September 29. This was one of the four days used to divide the year into quarters; the other three were Christmas, Lady Day (March 25), and Midsummer Day (June 24). The action of the novel, which is carefully worked out chronologically, will terminate around Michaelmas of the following year; most of Jane Austen’s novels transpire over a period of approximately one year.

6. It was common for servants to precede their masters in order to prepare a house.

7. “Four or five thousand a year” is Mr. Bingley’s annual income in pounds.  This is the way Jane Austen usually describes wealth; the income would normally come from the agricultural profits on land or from other property and investments (in Bingley’s case, it turns out to be the latter). It is not easy to translate incomes of the time into today’s money. By some calculations, the effects of inflation mean that a pound in Jane Austen’s time has the value of almost forty pounds today; if so, Bingley’s income would be the equivalent of £150,000 to £200,000 a year in today’s pounds (or around $250,000–$300,000 in current U.S. dollars). Estimates like this are tricky, however. For example, most goods cost much more than they do now in relative terms, while labor was much cheaper. In addition, the average income in this period, even when adjusted for inflation, was much lower than in our time, so Bingley’s income represents a far sharper deviation from the norm than its current equivalent. Another way to put such wealth in context is to note that in Sense and Sensibility a mother is able to support herself and three daughters in reasonable comfort in a nice home she has rented, with a staff of three servants, on five hundred a year. Jane Austen herself lived most of her life on less than that. The Bennets, who live well, have an income of two thousand pounds a year. Hence Bingley, however one calculates it, is a truly rich man and a highly desirable matrimonial prospect.

Mrs. Bennet’s knowledge of Bingley’s income, before he has even arrived, reveals the speed with which vital information about people could circulate. Local gossip played a central role in this society, greatly assisted by the many servants in employment, who could convey the secrets of their household to other domestics and townspeople. This means of spreading information is mentioned later in this novel, as it is in other Jane Austen novels, most notably in Emma.

11. In this society there are strict rules for visiting people one does not know. Since Mr. Bingley is a man, Mr. Bennet should make the acquaintance first (Mrs. Bennet worries about both Sir William and Lady Lucas visiting, but in fact only Sir William goes, see p. 14). Mr. Bennet certainly knows this, and is simply pretending not to know in order to tease his wife. His teasing went still further in his earlier suggestion that the daughters go without their mother, for young unmarried women would never visit an unmarried and unrelated young man on their own, even in cases where they were already acquainted with him.