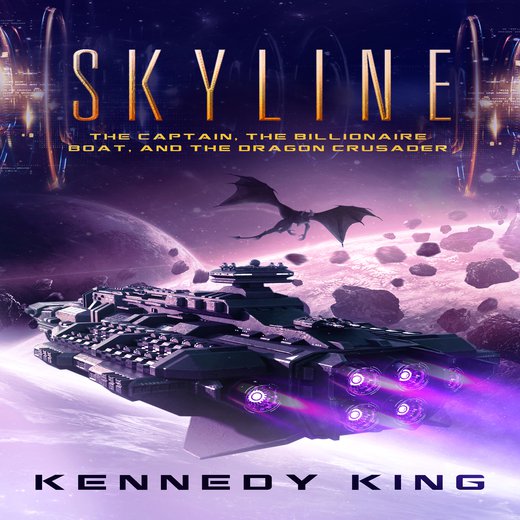 SkyLine: The Captain, The Billionaire Boat and The Dragon Crusader

The balance between human and Dragon rests on the shoulders of a young pilot on her first mission.

Dawn Redding. An Admiral of the World Crisis Committee, she stands on the threshold of the life she gave everything for. She only needs to bring in the galaxy’s first outerworld outlaw.

Howard Carver. The legacy left behind by his family holds the key to facing humanity’s greatest threat, the far-flung lifeforms known as Dragons.

Rick Miller. A retired Captain with the ship to take them both to the outerworlds, where the outlaw Drogan lurks.

These three come together aboard the ageing Arcadia, a ship equipped with an AI named Alice, who is capable of self-piloting. Dawn, naturally feels useless. With or without the use of her greatest skill, she discovers her purpose as a leader when the group comes face-to-face with the being between man and Dragon himself. Drogan.

The astral road to him, the SkyLine, launches Dawn and the crew of the Arcadia from Mars to Neptune, and past the edge. Companions in loathing and love, they fight to level the cosmic scales. Through it all watches Alice, inside the Billionaire Boat, the Arcadia. More closely than anyone, she watches Dawn.

What waits for the crew at the edge of humanity’s reach; the land of the Dragons: redemption, or damnation?

This is the second installment of the ongoing series, SkyLine. This book is intended for a young adult to adult readers. It contains some graphic violence and some explicit sexual content.

Book 2: The Captain, The Billionaire Boat, and The Dragon Crusader