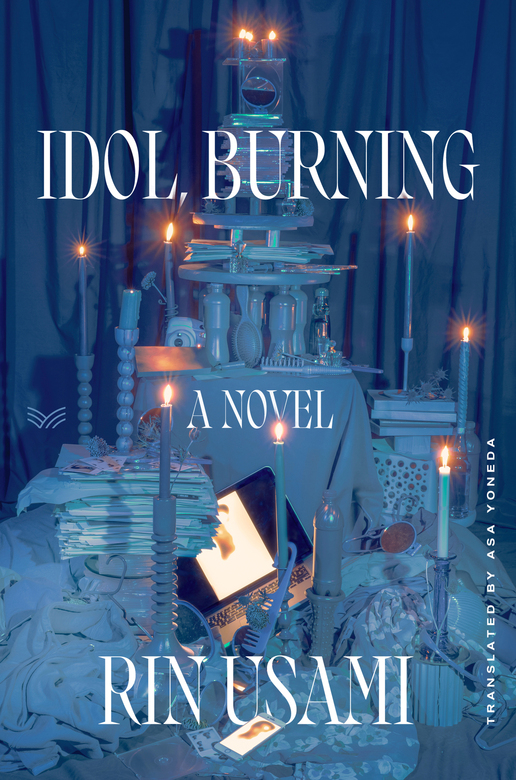 A DECEMBER INDIE NEXT PICK!

“Haunting and sincere, Idol, Burning subverts and astonishes. Rin Usami balances humor, obsession, heartbreak, and sacrifice in her debut, crafting a story that's both enveloping and expansive. Usami's writing is thrilling and deft, and her novel illuminates the shadows cloaking our digital lives, leaving us with honesty and grace in equal measures. Idol, Burning is a barnburner and a prayer and a testament to the lengths that we'll go to reach for our dreams.”—Bryan Washington, award-winning author of Memorial and Lot

The novel that lit the Japanese publishing world on fire: From a breathtaking up-and-coming writer, a twenty-first century Catcher in the Rye that brilliantly explores toxic fandom, social media, and alienated adolescence.

Akari is a high school student obsessed with “oshi” Masaki Ueno, a member of the popular J-Pop group Maza Maza. She writes a blog devoted to him, and spends hours addictively scrolling for information about him and his life. Desperate to analyze and understand him, Akari hopes to eventually see the world through his eyes. It is a devotion that borders on the religious: Masaki is her savior, her backbone, someone she believes she cannot survive without—even though she’s never actually met him.

When rumors surface that her idol assaulted a female fan, social media explodes. Akari immediately begins sifting through everything she can find about the scandal, and shares every detail to her blog—including Masaki’s denials and pleas to his fans—drawing numerous readers eager for her updates.

But the organized, knowledgeable persona Akari presents online is totally different from the socially awkward, unfocused teenager she is in real life. As Masaki's situation spirals, his troubles threaten to tear apart her life too. Instead of finding a way to break free to save herself, Akari becomes even more fanatical about Masaki, still believing her idol is the only person who understands her.

A blistering novel of fame, disconnection, obsession, and disillusion by a young writer not much older than the novel’s heroine, Idol, Burning shines a white-hot spotlight on fandom and “stan” culture, the money-making schemes of the pop idol industry, the seductive power of social media, and the powerful emotional void that opens when an idol falls from grace, only to become a real—and very flawed—person.

Translated from the Japanese by Asa Yoneda. 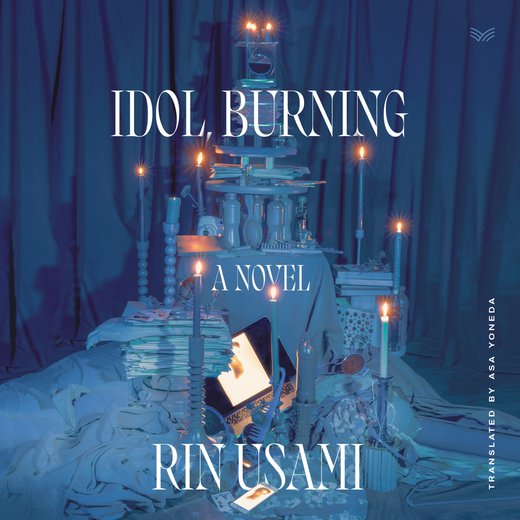 My oshi was on fire. Word was he’d punched a fan. No details had emerged yet, but even with zero verification the story had blown up overnight. I’d slept badly. Maybe it was my gut telling me something was up—I woke up, checked the time on my phone, and noticed the commotion in my DMs. My dazed eyes lit on the line

For a split second I didn’t know what was real. The backs of my thighs were sticky with sweat. Once I’d checked the news sites, there was nothing I could do but to sit transfixed on my bed, which had shed its blanket in the night, and watch the fallout as the rumor and the flaming proliferated. The only thing on my mind was the status of my oshi.

The text notification popped up on my lock screen, covering up my oshi’s eyes like a criminal. It was from Narumi. The words were the first thing out of her mouth the next morning when she ran onto the train car.

Narumi sounded the same in person as she did online. I looked at her face, the round eyes and concerned brows overflowing with tragedy, and thought, There’s an emoji like that.

The top two buttons of her uniform blouse were open and she sat down next to me in a waft of cold citrus antiperspirant. Social media—which I’d opened almost by reflex after entering 0-8-1-5, my oshi’s birthday, into the lock screen, ghostly under the sharp glare—was mired in people’s hot breath.

Narumi leaned over and pulled out her phone. There was a dark-toned Polaroid sandwiched inside its clear silicone cover.

“Isn’t it great?” Narumi said, with a smile as uncomplicated as a LINE sticker. Everything Narumi said was straightforward, and her facial expressions changed like she was switching out profile pictures. I didn’t think she was being fake or insincere; she was just trying to simplify herself as much as possible.

“When you think of it that way, right?”

The indie idol group she followed let fans take photos with their favorite group member after live shows. Narumi’s showed her with her hair carefully braided and her oshi’s arm around her, or the two of them cheek to cheek. Until last year she’d supported a major label group, but now she talked about leaving the mainstream idols on their pedestals and getting up close and personal with the underground. Come over to the dark side, she’d say. It’s so much better. They remember who you are, and you could get to talk one-on-one, or even date them.

The idea of making direct contact with my oshi didn’t interest me. I went to shows, but only to be part of the crowd. I wanted to be inside the applause, inside the screaming, and anonymously post my thanks online afterward.

“So when we hugged, he tucked my hair behind my ear, and I was like, Shit, is there something on it?” Narumi lowered her voice. “And then he said, ‘You smell good.’”

“No. Way.” I emphasized the pause between the words.

Narumi said, “I know, right? There’s just no going back,” and slipped the Instax back in her phone cover. Last year, her previous oshi had announced he was retiring from the entertainment industry to go study abroad. She hadn’t come to school for three days.

The shadow of a utility pole passed across our faces. As if to suggest she’d gotten overexcited, Narumi straightened out her knees and, much more calmly, addressed her rosy kneecaps. “Anyway, Akari, you’re doing good. It’s good you’re still here.”

“For a second I thought you meant, among the living.”

Narumi laughed somewhere deep inside her chest. “That too.”

“Oshi work is life and death.”

Fandom talk could get a little over the top.

< Thank you for being born >

< missed out on tickets my life is over >

Narumi and I could be guilty of this, too, but it didn’t feel right to me to talk marriage and whatnot only when things were going well, so I typed:

< I stan by my oshi in sickness and in health. >

The train came to a stop, and the sound of cicadas swelled. I tapped Post. An instant Like flew in from next to me.

I’d accidentally brought my backpack to school without unpacking it from when I went to see my oshi perform a few days ago. The only things in there I could use for school were the loose-leaf paper and pens I used for noting down my impressions of the show, so I had to share in Classics and borrow for Math, and stand by the side of the pool during PE because I didn’t have my swimsuit.

I never noticed it when I was in the pool, but the water overflowing onto the tile felt slick, as though something was dissolved in it—not sweat or sunscreen, but something more abstract, like flesh. The water lapped at the feet of the students sitting out the class. The other student was a girl from the homeroom next to mine. She stood at the very edge of the pool handing out kickboards, wearing a thin white long-sleeved hoodie over her summer uniform. Bare legs gave off blinding flashes of white each time they kicked up a spray of water.

The herd of water-dark swimsuits also looked slippery. The girls pulled themselves up by the silver handrail or onto the grainy yellow ledge, making me think of seals and dolphins and orcas hauling themselves onstage at an aquarium show. Rivulets fell from the cheeks and upper arms of the line of girls saying “Thanks” as they took my pile of kickboards, leaving dark stains on the dry pastel foam. Bodies were so heavy. Legs spraying up water were heavy, and wombs that shed their lining every month were heavy. Kyoko, who was by far the youngest of the teachers, demonstrated “moving from the thighs,” using her arms as legs and rubbing them together. “I see some of you just flapping your feet around. None of that effort is getting you anywhere.”

We also had Kyoko for Health. She used words like “ovum” and “erectile tissue” without skipping a beat so things never got awkward, but I still felt the burden of my involuntary role as a mammal dragging me down.

In the same way that a night of sleep put wrinkles in a bedsheet, just being alive took a toll. To talk to someone you had to move the flesh on your face. You bathed to get rid of the grime that built up on your skin and clipped your nails because they kept growing. I exhausted myself trying to achieve the bare minimum, but it had never been enough. My will and my body would always disengage before I got there.

The school nurse recommended I go see a specialist, and I was given a couple of diagnoses. The medication made me feel ill, and after I repeatedly no-showed on appointments, even getting to the clinic started to be a struggle. The name they put to the heaviness in my body made me feel better at first, but I also felt myself leaning on it, dangling from it. Only through chasing my oshi could I escape the heaviness just for a moment.

My very first memory is of looking directly up at a figure in green. My oshi, at twelve years old, is playing the role of Peter Pan. I am four. You could say my life started when I saw my oshi fly past overhead, suspended on wires.

But it wasn’t until a lot later that he became my oshi. ...