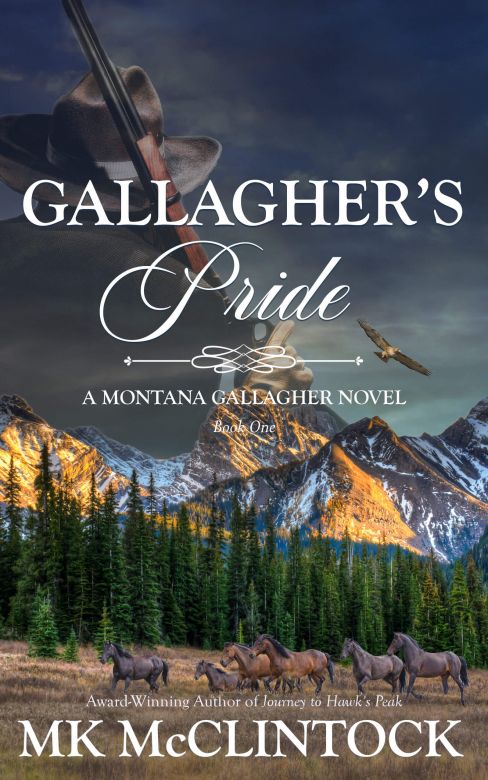 Book 1: Montana Gallagher Series
MK McClintock
Follow
She is on a quest of discovery. He is on a quest for revenge. Together they will discover a second chance.
Genres: American RomanceWestern RomanceWesterns
Buy now
Available in:
Keywords: Family SagaAmerican Westhistorical western romanceAmerican Historical Romancemontanafamily ranchwesterns

From the Scottish Highlands to the Montana frontier, experience the first book in a series about a family in search of peace, hope, and love on a wild land.

Brenna Cameron travels from Scotland after losing someone she loves in search of family she didn't know existed. Alone now in the world, Brenna makes an arduous journey, following the trail of discovery to Briarwood, Montana. Here she meets Ethan Gallagher and the rest of the Gallagher clan. Only with their help is she able to discover lost family, heal old wounds, and embark on a treacherous confrontation with a man who destroyed her family.

As head of the Gallagher clan, Ethan has more than enough to occupy his thoughts and time—he didn't need the complication of Brenna Cameron and he certainly didn't need the trouble that came with her. Ethan takes on the unwanted duty of self-appointed protector to the headstrong Scot, only to discover there is such a thing as second chances and more to life than revenge.

Adventure, danger, and timeless love—Gallagher's Pride is the first in a series about a frontier family's legacy, healing old wounds, and fighting for the land they love. 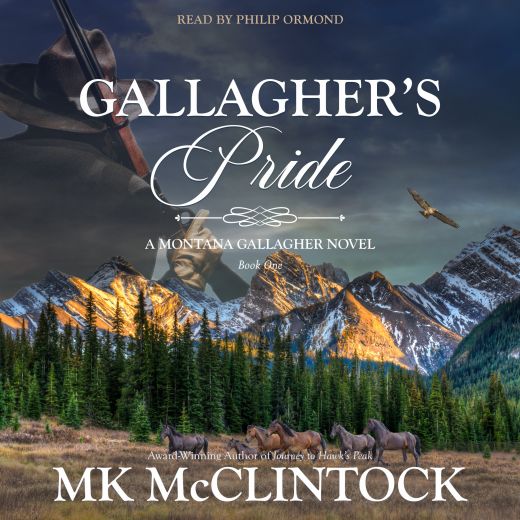 Brenna waited until she stood at the water’s edge, exasperated with the man, but grateful he insisted on joining her. Since she’d been bored in the saddle throughout the day, she had memorized different landmarks. She didn’t doubt that if she tried to find her way back, she’d still get lost.

She carefully set her satchel down on a rough rock next to the water and stripped down to her camisole and bloomers. Neither garment was the most practical thing to wear under the borrowed breeches, but she refused to do without them. Testing the water with a quick dip of her foot, she determined that she exaggerated. It didn’t feel like a tropical current, but it certainly wasn’t as cold as some of the rivers back home. Brenna submerged herself into the water as best she could and washed with her heather-scented soap she had made in large batches back home. Once she was adequately clean from hair to feet, she moved to the bank, only she didn’t make it out of the water.

Ethan heard the scream and bolted to the water. He arrived at the water with his gun drawn, ready to protect her, but when his eyes rested on Brenna he couldn’t see anything wrong with her. He moved closer and saw her face. He’d never seen eyes so big in his life. He followed her terrified gaze until his eyes settled on the retreating rear end of a small black bear.

Ethan wanted to laugh and it took all of his control not to.

Brenna finally found her voice. “What took you so long? That thing could have attacked.”

Now he did laugh. He just couldn’t help it. “I take it you’ve never seen a bear before, Miss Cameron.”

“A bear? No I haven’t actually seen a bear before, Mr. Gallagher, and I’ll thank you to stop laughing at me.”

“Your scream was enough to scare it away. It just wanted to find a light meal.” He pointed to the blackberry bush she chose to bathe near.

“I’ll have you know that I’ve seen far worse creatures in my lifetime than a measly bear. Just startled me is all.”

Brenna scowled at him, and he stopped laughing only when he noticed her state of undress. The delicate white undergarments clung to every curve, and her long red hair rioted in wet curls around her shoulders and arms. The bright moon overhead left nothing unnoticed. She was still submerged to her knees and appeared to be turning blue. Ethan cleared his throat and turned away, giving her his back.

“You’d better get out of there before you turn sick.”

Feeling too foolish and cold to care about anything else other than a hot meal and blazing fire, Brenna quickly left the stream and removed her wet clothes to put on her nightgown. Ethan had been right about that necessity. She gathered her satchel, but couldn’t stop her teeth from chattering. “I’m ready.”

He turned around and thought she looked like the most adorable creature he ever laid eyes upon. For all of her bragging and gumption, she was obviously cold and her nightgown clung to a few patches of wet skin. He held out his hand to her without saying a word. She offered him a grateful smile and took it.

Once Brenna settled on her bedroll, she immediately brushed and dried her hair by the fire while Ethan started another pot of beans. The first one had burned when he ran to fight off her ferocious attacker.

Brenna plaited her hair while still damp and thanked Ethan when he handed her a plate of food. They ate in silence, and when she was about to turn in for the night, he spoke.

“The next time you want to bathe, let me know and I’ll be happy to stand guard for you.” He didn’t even try to hide his grin.

Brenna wanted to throttle him.

End of Preview. More at https://www.mkmcclintock.com/excerpt/gallagher's-pride