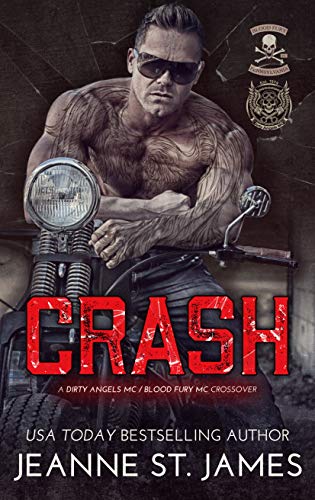 Is the risk worth the reward?

It was a time to gather with the allies to witness the wedding of a president and his ol' lady in front of the three powerful clubs that rule western Pennsylvania.
The Bloody Fury MC.
The Dark Knights MC.
And of course, Crash's own club, the Dirty Angels MC.
Three tight-knit brotherhoods celebrating a weekend blow-out full of women, partying and more.
For Crash, it may end up being so much more.
She's the property of another club.
Property he doesn't have permission to touch.
Property he can't resist touching.
But taking what he wants means risking a crack in the alliance, one he doesn't want to be responsible for.
Creating an issue he doesn't need to cause for his MC. For his president.
But Crash has never been one to blindly follow the rules.
Especially when it comes to someone so tempting.
In the end, she ends up being a risk he can't stop from taking.
To hell with the consequences.

Note: While this book can be read as a standalone, it's a crossover between the Dirty Angels MC series and the Blood Fury MC series. It's best read after the complete DAMC series and before Blood & Bones: Ozzy (Blood Fury MC, book 9). As always, this book has no cheating, no cliffhanger and has an HEA.