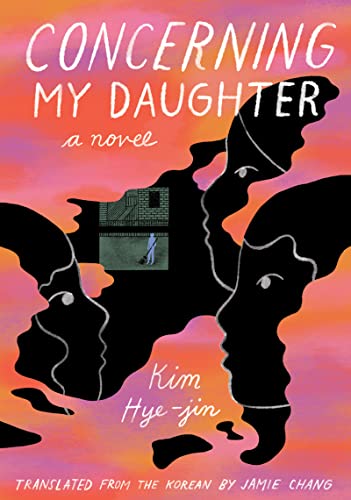 When a widowed, aging mother allows Green, her thirty-something daughter, to move into her apartment, all she wants for her is a stable and quiet existence like her own. Ideally, a steady income and, most importantly, a good husband with whom to start a family.

But when Green turns up with her long-term girlfriend in tow, her mother is enraged and unwilling to welcome their relationship into her home. Having centered her life on her husband and child, her daughter’s definition of family is not one she can accept. Green’s involvement in a campus protest against unfair dismissals of gay colleagues throws her into deeper shambles.

Meanwhile, the nursing home where she works insists that she lower her standard of care for Jen, an elderly dementia patient who traveled the world as a successful diplomat, chose not to have children, and has no family. Outraged, Green’s mother begins to reconsider the unfair consequences of choosing one’s own path.

With bracing honesty, Kim Hye-jin taps into the complexities of mother-daughter dynamics while unearthing the mechanisms of violence that target LGBTQ communities in traditional societies. Elegantly translated from the Korean by Jamie Chang, Concerning My Daughter shines a light on all facets of familial love and conflict.

The server brings over two bowls of hot udon. I look at my daughter as she grabs chopsticks and spoons from the box of utensils. She looks tired, or thinner, or older.

You didn’t get my text? she asks.

I did. I was going to call, but I kept forgetting, I say. That’s a lie. I wore myself out racking my brain over her problem all weekend. And yet here I am, sitting across from her at a table without a single alternative suggestion or plan.

Where were you this weekend?

I name an acquaintance I may have mentioned in passing, and tell her I went out for a meal with her. It looks like she has follow-up questions, but she only says, Okay.

You should have made a day of it, she adds, as if to show she cares. There’s lots of festivals going on these days.

I pick up a thick udon noodle to eat with my chopsticks. In my youth, I was a fan of noodles. One out of my three daily meals would be a noodle dish. I still like noodles, but it’s what happens after the meal that’s the problem these days. How many times do I have to walk around stroking my stomach, bloated from indigestion, and wake up several times during the night before I learn my lesson? Crossing off items from the list of things you enjoy—that’s what it means to grow old.

College students come in and office workers flock to the cash register. The din of laughter and conversation grows louder. Everywhere I go, all I see is young people. My face full of wrinkles and age spots, thinning hair and slouched shoulders. I don’t belong here. I fear at any moment, anyone could express their very obvious displeasure at the sight of me. I cautiously scan the restaurant. My daughter’s bowl of udon is emptying fast. I’m still agonizing. Should I really say it? Would it be okay? Should I not say it? Is it not okay? But there’s just one thing I fear: the retribution this rejection will bring.

As you know, I say after a long silence. As you know. A clear indicator of rejection. Disappointment flashes in her eyes.

I know. You’re just getting by, she says. Nonetheless, she keeps her focus on me, waiting for me to say something else. I cannot handle the rent in this country that climbs higher and higher even as I lie sleeping at night. Frightening how it grows without end. I’ve been disqualified from the game of running and leaping ever faster and higher to keep up with it for a long time now.

As you know, that house is all I have, I say.

The outskirts of the city, rows of houses packed in like rotting teeth along small alleys. A two-story house just like its owner: creaking joints, decaying bones, in the process of keeling over. A house left behind by a world that grows more fearless by the day. My husband’s only legacy. A clear, tangible thing. The only thing over which I can claim control and exercise ownership.

I know. But I’m all out of ideas, too. Who should I go to at times like this if not you? she mumbles, stirring the bowl with her chopsticks. Her voice rises and falls between resignation and hope. And then she takes it a step further: a monthly interest payment for lending her a lump sum of money. She’s referring to the rooms on the second floor with the water-stained bathroom ceiling that leaks when it rains, the grimy, tattered flooring, and the wind, dust, and noise constantly coming in through the old wooden windows. She’s asking me to kick out the rent-paying tenants and get people who could pay a jeonse deposit, to secure a large sum of cash.

But getting new tenants won’t be easy. Just a few days ago, the housewife from the second floor came down to complain about the leak in the ceiling above the kitchen sink. She said—with a mix of irritation and empathy, embarrassment and hesitation—that it would take professional workmen from a firm to fix the ceiling, not an old neighborhood handyman.

I get it. Just give me some time, I say. But I don’t have the means right now. I don’t have the luxury of taking on a repair that will cost me who knows how much. I bet the same goes for the housewife who is begging me to get it fixed.

My daughter is tapping the air below the table with her two feet. The heels of her sneakers are worn down at an angle. The bottoms of her pants are tattered and dirty. Is she really so ignorant of the fact that these little things reveal a person’s character? Impoverished, lazy, insensitive, and stubborn— such private things, things that should be hidden from the view of others, laid so bare. Why does she let other people get the wrong impression? Decency and neatness, tidiness and cleanliness—why does she insist on altogether ignoring these qualities that everyone values? I take pains to keep these thoughts to myself.

Mom, are you listening? She presses for an answer.

I put down my chopsticks after a long while, dab the corners of my mouth, and meet her eyes. Okay. This is what it means to be family. I am her only family. I am able to be her family. I guess. Because of this house. Because of the fact that I own a house.

All I say is this: Okay. Let’s think of a plan.

Hey, how much did you put in? the professor’s wife whispers.

Her whispers are loud enough for people around us to turn and look. I stop by the building entrance and pat her gently on the back of her hand.

Fifty thousand, I say. We give what we can.

The professor’s wife takes out the envelope from her handbag and grumbles as she adds another twenty thousand. Why so much? Thirty thousand would have been fine.

A cheap rose scent rises from her body each time she moves. Her wine-colored handbag must be full of these cheap products. Things one can easily give away by the bottle in a flourish of generosity if the expiration date is getting close or the quality is too poor. She’s given me a few things, but I didn’t get around to using them. They were in the back of my mind, but I never remembered to use them before it was too late. Things to remember lurk behind me, blinking dimly as if ready to light up, invariably going dark.

What’s the point of giving money when the person is dead and gone? the professor’s wife says. It only goes into the children’s pockets. It’s best to take people out for decent meals when they’re alive, am I right? This is the kind of custom that needs to disappear. Tsk.

The professor’s wife continues to talk as we push the revolving door into the building and step into the foyer. I step aside to get away from the bright lights and the stinging glare of the even brighter floral arrangement made up of white chrysanthemums. Looking up at the large screen to find the wake room, the words slip from my lips: It’s depraved. Depraved.

The late Sung treated us to about 100,000 won’s worth of meals. Probably much more. Sung was generous. No, “generous” is not how I would put it considering she wasn’t very well-off. Regardless, she always paid before anyone else could, had you feeling beholden, and used it to keep people around her. Still, the professor’s wife being miserly at a wake is just vulgar. She claims to be a professor’s wife, but she’s never said where her husband used to teach, not to mention that we’ve never met the man. Not that it matters at our age. The lines drawn and walls put up when we were young to separate us from them mean nothing when we’re old.

Because we’re all the same old people. And there’s only a handful of places that are willing to take old folks like us.

But such things aren’t said out loud.

While we find the wake room for Sung, pay our respects, offer our condolences to the sangju—”owner of loss,” or the head of the bereaved—who I am certain is Sung’s son, and sit in the mourners’ hall, I sip on the mushroom tea I brought in my thermos. The professor’s wife shovels down spoonfuls of rice in chili-red, spicy beef soup. She eats several slices of boiled pork that’s dried up from sitting out a while. Then she takes out her phone and starts showing everyone pictures of her son and grandson.

Hey, do you have a tissue? she says. Or a plastic bag somewhere?

She turns and leans toward me, takes the plastic wrap off the disposable plates, and sweeps the beer nuts in. I help by pulling the plates of food closer to her.

My grandson is crazy about these little snacks. My daughter-in-law is always telling me to stop, but how can I? I’ll sneak him some. ...